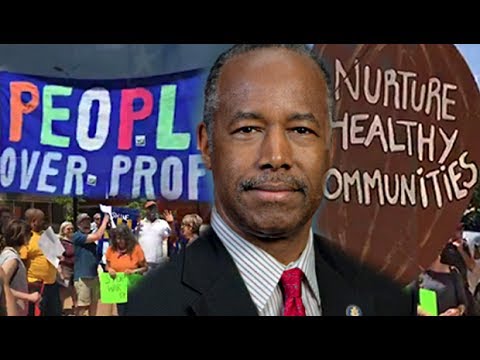 Jaisal Noor: I’m Jaisal Noor with The Real News Network. We’re live here in Baltimore where a few dozen people have gathered to protest a visit by Ben Carson. He’s Donald Trump’s housing secretary, head of Housing and Urban Development. The Trump Administration as proposed drastic cuts to public housing, some $7 billion, which is going to hurt communities in Baltimore especially hard. People have gathered here to make sure their voices are heard as well.

Anthony Williams.: My name is Anthony Williams. I’ve been born and raised on the East Side, off and on homeless for many years. I finally was able to get a Section 8 voucher in 2015. I have an apartment a few blocks away [inaudible 00:00:49].

Jaisal Noor: I wanted to say there’s a huge wait list for that.

Jaisal Noor: When they opened up, 1/6 of the population signed up to be on that list. 60,000 people signed up.

Anthony Williams: Yeah. I was able to get a Section 8 voucher.

Jaisal Noor: You’re one of the lucky ones.

Anthony Williams: I’m one of the … Well, yes and no. Because right now, my Medicaid is under attack. Also, my housing is under attack. If I can’t afford … Right now, I pay 365 a month with my utilities included. If I have to pay utilities, plus I work part-time. I just started my life over. I need my Medicaid to continue to maintain on a daily, on a day to day basis. Well right now, all this is under threat. The Section 8 voucher is under threat. My Medicaid is under threat. We have thousands of thousands of peoples in this city that are very concerned, including myself because I’m directly affected by this.

Speaker 3: There are 100,000 families in Baltimore who can’t afford to pay their rent every month, but the Trump/Carson budget doesn’t increase affordable housing, it decreases it very dramatically, so it’s going to manufacture evictions and homelessness. We need a very different kind of housing policy and that’s why we’re here. There are many, many ways in which housing and health are interconnected. In fact, some smart person wrote a white paper on the subject, and I would commend it to your audience. Among those ways when people are living in healthy housing then their health is improved. When people don’t have housing, then their health suffers. There’s a very direct correlation between homelessness and poor health.

Speaker 4: Just a couple blocks aways from us is land by Charm City Land Trust, which is the first in what we hope is going to become a network of land trusts all across the city that give people who live in each neighborhood control over how a lot of the land in their neighborhood is used. Right now, Charm City Land Trusts owns a community garden where the first day of our summer camp just happened today. It owns one home that we’re hoping to develop into affordable housing that’ll be permanently affordable for people to stay in the community and we’re hoping to get investment from the city to make many, many more homes like that possible across the city.

Speaker 5: We already see those impacts right now. Baltimore is the epicenter of homelessness meets poverty meets lack of jobs. Everything that could wrong is happening here and we’re just continuously exacerbating that problem. We’re just going to see that ripple in crazy amounts right now. That’s what’s going to happen. We see crime as a result of poverty and that’s just going to double and increase 10 fold. The 20/20 Vision calls on the city to publicly invest in community land trusts and other shared equity models. The first $20 million will go to developing community land trusts so that could be used for housing, urban green spaces, all kinds of things like that. Another $20 million devoted to rehabbing and renovating properties around the city.

Speaker 6: I’m concerned about the housing issues. Affordable housing, housing for the homeless. I’m also concerned about the corruption that goes on in housing because I, myself, has been a victim of corruption and housing. A lot of things are going on and when you try to call officials to do something about it, they’re not answering anybody and they just let the corruption escalate. I believe housing corruption is part of the reason why you have some homelessness issues. They blame them on drugs and other crime and stuff like that, but the corruption in housing is one of the reason why I feel we have homelessness issues.

Speaker 7: Housing is a human right and our current speculative market based housing system will never provide the housing that Baltimoreans need. It’s been proven time and time again that the market will not do that and it’s about time that the federal government and city government especially invest in our people and invest affordable housing from top to bottom. Yeah. No doubt that some of our models of affordable housing in the past have not worked out, but that’s not because of the housing.

Jaisal Noor: What are community land trusts, for people that haven’t heard about that?

Speaker 7: Sure. A community land trust is a way to create permanently affordable community controlled housing by removing housing from the open market and the community will control that housing through a board of directors made up of community members and those people literally get to decide the fate of the land in their communities. If they want to have housing, they have housing and it’s affordable housing. If they want to have green space, it’s green space, commercial space, anything you want to do because the community controls the land.