Pressure Mounts on Johns Hopkins to Pay a Living Wage 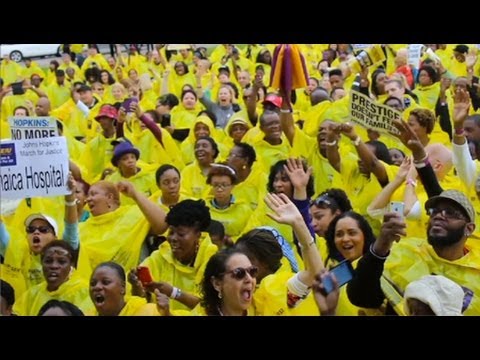 JAISAL NOOR, TRNN PRODUCER: At the world-renowned Johns Hopkins Hospital in Baltimore the starting wage is $10.71 an hour, and 1,400 employees–including some 15-year veterans–are paid less than $10.91. That qualifies a family of four for food stamps.

That’s why on Saturday, May 10, ahead of the expected resumption of contract negotiations, thousands rallied to demand the hospital pay more

HOPKINS WORKER: There is no reason for us at all to be getting food stamps, to not be able to have enough to take care of our children. There’s no excuse for that.

NOOR: Two thousand healthcare workers represented by 1199SEIU United Healthcare Workers East walked off the job for three days on April 9 to demand a $15 an hour base wage by 2015. Hopkins offered a five-year contract with a 2 percent raise.

The Real News spoke to striking workers on the picket lines

SAMMY DAVIS, STRIKING HOPKINS HOSPITAL WORKER: ‘Cause basically, you know, I’m a 15-year veteran, and making, you know, a little under $13 is just not acceptable. You know, everything’s going up but the pay. And, you know, I know they say that it’s a low-skill job position, but it’s a high-risk job position as well. I get splashed with blood on a daily basis, have to take HIV prevention medicine, you know, all for basically $12.95.

WILEY RHYMER, STRIKING HOPKINS HOSPITAL WORKER: I’m asking for more money myself ’cause I’m taking four kids, I’m on public assistance, I get food stamps, I get Medicaid. And Hopkins has the nerve to say that they don’t have the money. You’re standing in front of two buildings they just built for $1 billion. They’re buying up property on the east side to build more buildings. They’ve got the money; they just don’t want to give it out. And Maryland did raise the minimum wage to $10.10, but that ain’t going to go into effect to, what, four years from now, and we’re barely living now on what we got.

NOOR: Union leadership bussed in hundreds to supporters workers like seven-year Hopkins veteran Craig Perlie, who says $11.65 an hour is not enough.

CRAIG PERLIE, SEVEN-YEAR HOPKINS VETERAN: I’m supporting me and my three nieces. I’m a big part of their life. I’m the only male figure in their life, and I support them in every single way. And so the money I make at work is not only supporting me but putting clothes on their back, food in their mouth, and a roof over their head.

NOOR: Addressing the crowds at the rally, SEIU president Mary Kay Henry shared what a physician told Perlie when he returned to work after the strike.

HENRY: The doctor gave him back his mop and bucket and said, this is the hardest job in the hospital, I didn’t know what I was doing, and Craig helped the doctor understand that he didn’t clean the room well enough to ensure no infections for patients. And this is how we build our union. One by one, help the people understand that the work we do deserves fair pay.

NOOR: Hopkins did not respond to an interview request. But in an email, Kim Hoppe, its media relations and public affairs director, told The Real News, quote:

“Only with significant cost containment will the hospital be able to maintain our research, education, clinical care efforts, and at the same time provide job security to all of our employees.”

But longtime activist and University of Maryland School of social work instructor Jeff Singer recently told The Marc Steiner Show why Hopkins can in fact afford to pay its workers more.

JEFF SINGER, SOCIAL WORK INSTRUCTOR, UNIV. OF MARYLAND: … according to their tax forms, Hopkins has both very large assets and a good deal of income. Nonprofits–you know, and Hopkins is one–need to have more money at the end of the year than they started with or else they’ll go out of business. And in the Hopkins case, for their latest 990 on the internet, they had revenue over expenses of $84 million. Now, that’s less than they had the year before and the year before that. The hospital business is a difficult one, for sure. Nonetheless, $84 million would be about 28 times what they need to pay a decent wage to the folks that work there.

NOOR: Singer also notes that in 2012, Hopkins paid its CEO, Ronald Peterson, $3.4 million dollars–more than 156 times the starting salary of a worker.

SINGER: … you know, there’s been an awful lot of talk about income inequality. President Obama recently said income inequality is the defining issue of our times. But it’s time that we put our money where our talk is. We can reduce income inequality, for sure, but we have to start somewhere. And I would say that Hopkins, as the leading hospital in the nation, could start by reducing income inequality and paying this living wage. They can clearly afford it. Their assets in their last 990, their assets were $470 million.

NOOR: Hopkins also told The Real News, quote, that their pay scale and benefits for union positions are better than most hospitals in the region.

However according to data obtained from the Health Services Cost Review Commission, a government entity that tracks hospital financial records in Maryland, Hopkins pays less for low-wage work compared to other hospitals in Baltimore City and County.

The Wire‘s Wendell Pierce argues, by using direct action organized labor has the power to affect the labor market.

WENDELL PIERCE, ACTOR: We’re saying, no, the market should set the pay at $15 an hour. And how can you do that? You impact the market. And that’s why this reality is happening here today. You don’t agree with that, well, then we’re going to impact the market. You’re not going to be able to deliver your product of health care because we won’t be there to work.

GEORGE GRESHAM, PRESIDENT, 1199SEIU: We are also here to say that we’re not going to take it anymore, that we’re going to raise our voices, and that if it takes time after time that we come to disturb the peace, we will disturb the peace until we get a contract that is fair.

Hopkins-trained community activist, organizer, and physician Dr. Marisela Gomez questions why the hospital does not consider the health impact of low wages on its workers.

DR. MARISELA GOMEZ, COMMUNITY ACTIVIST AND ORGANIZER: I would look a little bit more closer at how its own employes are faring, how they are accessing help, what’s their disease burden, how are they suffering with illnesses, and how is their wages not allowing them to live in places that allow them to live less stressful lives. I think these are the things that we need to lift up a little more.

NOOR: Here are some of their voices of the thousands who took part in the rally:

PROTESTER: It isn’t until we leave that they understand how important we are. We’re invisible until you need us. Well, it’s time for us to say to Johns Hopkins, it’s about time you compensate us for the work that we do.

GRESHAM: Today, thanks to our International Affairs Department of the SEIU, a rally and a demonstration was held in Brazil. Also in Panama. These are places that Johns Hopkins has affiliates. And later today in Washington, D.C.

Raise your voice so Johns Hopkins can hear you.

NOOR: Reporting from Baltimore for The Real News, this is Jaisal Noor.