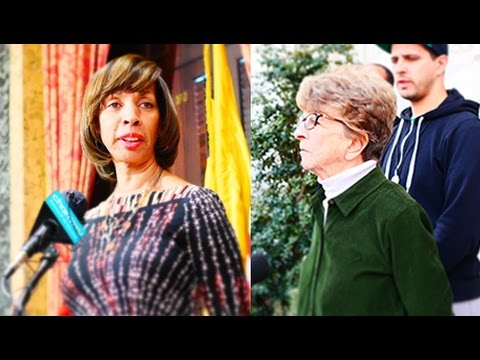 CATHERINE PUGH: So, for those reasons and the economic impact that I think that this has on the city, making us the hole in the donut, it is not appropriate at this time that I will sign this bill.

JAISAL NOOR: Mayor Catherine Pugh has just vetoed the $15 minimum wage measure in Baltimore on Monday; it passed by 11 to 3.

JAISAL NOOR: It’s been strongly opposed by the business lobby in places like Baltimore, across Maryland, and across the United States. It would have lifted the wages of about 80,000 people in Baltimore City alone. We’re here with a new councilperson, Ryan Dorsey, who just got elected, member of the new unofficial progressive caucus in Baltimore.

Ryan, start off by giving us your reaction to Mayor Catherine Pugh –- now, she’s a Democrat that promised to sign a $15 minimum wage measure if it go to her desk. What is your response to her veto?

RYAN DORSEY: Promises matter. Promises actually matter. If you want to reasonably and honestly be able to say we need to increase voter engagement, we need to expand our efforts at democracy, you have to retain the trust of the people who do actually participate in that system. For me, that’s about saying, “Here’s what I’m going to do,” and then when you’re elected, do it.

JAISAL NOOR: I questioned Mayor Pugh about her reasoning behind this, because she said she consulted with a lot of experts and leaders. She examined the impacts around the country, and I asked her, you know, it’s never been this… raising the minimum wage has never been shown to drive away jobs or hurt the economy, and she didn’t really have a good answer for that. She said there was a study done locally by the Baltimore Development Council –- which is the business lobby here.

JAISAL NOOR: Essentially, she relied on the business lobby to come to her conclusion. How do you respond to that?

RYAN DORSEY: I rely on the majority of citizens across this country, and the majority of the people in Baltimore City, that say, no, we don’t trust the business lobby. We believe that this can work for us. We don’t believe that we need to be kind of an underclass city, where good things that work elsewhere just can’t possibly work in Baltimore City.

JAISAL NOOR: I also asked her the question about the question, the issue that you raised in the press conference here. That by allowing such low wages, you’re essentially… taxpayers are subsidizing corporate profits. Because ultimately when it comes to healthcare, food stamps, taxpayers are paying to make up that money that these employers aren’t paying.

That we work with our surrounding jurisdictions, and that we make sure that the citizens of Baltimore have an opportunity to continue to look for jobs. And that we continue to train people, and that we’re not looking for them to maintain wages at $10, or $15 an hour. We want to train folks so that they can have better styles of living.

JAISAL NOOR: You addressed that in the press conference a bit. Can you expand on that?

RYAN DORSEY: Yeah. The finance department gave a report that… you know, when we compare this also to the business lobby, the business lobby puts so much, kind of specious reasoning forth in their opposition to this bill, that when it came down to the final hearing, they were abandoning all of this stuff that they couldn’t really defend. And the only thing that they were holding up at the end, was this report from the finance department saying, “Hey, look what your own city said that you’re…”

The truth is that that report is based on a very, very narrow focus, of how much the wages of people who work for the city will have to be increased over time. And took into account, in no way the other benefits. The reduction of costs associated with healthcare that would result from people having more money to be able to buy groceries. By people engaging in a more active mode of transportation, when the grocery store comes to their neighborhood because they have money there, and can walk across the street, or down the block to a grocery store, like that.

The myriad benefits that would come just from people not having money sucked out of their pockets.

JAISAL NOOR: And so, finally, some people say that Baltimore has pursued these same policies of subsidizing corporations, subsidizing the wealthy, for decades now, and it’s gotten us to this point. It’s always been a promise of uplifting Baltimore, creating jobs, addressing inequality, but it’s never happened.

Can you talk a little bit about that? Do you think Baltimore needs a new approach to address… you know, this is the City of Opportunity!

RYAN DORSEY: Yeah, look, this mayor campaigned on –- like me -– a promise to foster and usher investment in places outside of the downtown area. And that’s because we’ve seen it not benefit our city to engage in that kind of investing, to just continue to subsidize big business interests.

Yet, when it comes to bills like this, we go right back and listen to those people as our guiding voice, and it doesn’t make any sense.

You know, at the same time that we’ve been ceding our reasoning to deeply pocketed interests. We’ve also, like on a parallel track, been putting more and more and more money into policing –- and look at what that’s getting us. Like, we… it’s really time for us to turn the page, into new ways of thinking in all areas of public policy, and the vetoing of this bill does not in any way do that.

JAISAL NOOR: And finally, you know, the veto just happened an hour ago. It does… the last time we checked, this bill does have veto-proof majority. Do you think the council will be able to override Mayor Pugh’s veto?

RYAN DORSEY: If my colleagues hold fast for the interests of what the majority of Baltimore City, including all of my colleagues’ constituents, have said… if we hold fast. Cool?

JAISAL NOOR: All right. Thank you so much.

JAISAL NOOR: I appreciate it.

JAISAL NOOR: Okay. I’m Jaisal Noor for The Real News Network. Go to Therealnews.com for all of our coverage over the debate over a $15 minimum wage in Baltimore and across the country. Thanks so much for watching.