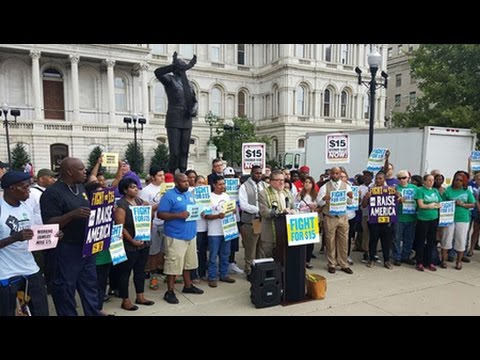 JAISAL NOOR: It would raise the wages of Baltimore City workers until 2022, until they reach $15 an hour.

MARY PAT CLARKE: This is one of many, many things, but it is something. And it says, “We do not support a society in which the wealth is built in a manner that is not shared, at least minimally and fairly, with the people that create the work.”

JAISAL NOOR: According to some analysts, this measure will lift the wages of tens of thousands of working class families. Talk about what you think the impact is going to be for Baltimore.

RICARRA JONES: So, we know that it’s going to have a positive financial impact. We know that it can increase higher graduation rates; means folks are going to be able to get employed better, and have higher income taxes for the city. It increases home ownership, which means that there are higher property taxes for the city. So, we know there’s going to be a lot of, not more money in folk’s pockets, but it’s also going to help the city financially. We know that that’s a concern for Mayor Pugh.

JAISAL NOOR: The Bill passed 11 to three, one vote short of a veto-proof majority. Councilman Brandon Scott, who supports the measure, was out of the country. He confirmed to The Real News, he’ll be back in time to override the mayor’s veto of the bill.

ANTHONY MCCARTHY: The mayor’s position has been very clear. Over the last several weeks she has said several times that she will study the final legislation, and she’ll make a determination. She has to balance the commitments the city’s already made with the DOJ, overtime in our police department, and other financial fiscal issues. What’s the city’s bottom line? She’ll make a decision within the next couple of days about where she’ll be on the minimum wage.

JAISAL NOOR: And many people have taken issue with the city’s financial estimate of the cost, saying it’s not going to actually cost the city any money, it’s actually going to lead to an increase in revenue. Does the mayor have a position on that?

ANTHONY MCCARTHY: Well, the mayor takes her counsel from our financial department, and they are very clear on what this will cost the city, not just in the short term, but the long term. So, we’ll look at all those considerations. She’ll do what she thinks, just like this council did. What she thinks is in the best interest of the people of Baltimore.

JAISAL NOOR: Among those that disagree with the city’s analysis is Ben Smith. He’s an independent analyst that’s consulted with the Bill’s sponsor Mary Pat Clarke. He said the city finance department’s $115 million cost estimate is misleading, and lacks any supporting information.

BEN SMITH: And when you look at the analysis that the finance department of the city did, they don’t really turn over any kind of in-depth assessment of the number of employees, part-time, relative to full-time. They don’t talk in-depth about how much the increase is actually going to be. I mean, basically there’s just no supporting data.

JAISAL NOOR: The Real News contacted the finance department to ask them where they got the $115 cost for a $15 wage, but did not get a response.

…to the mayor’s press person and he said, “The Mayor is evaluating the bill and she’s going to carefully consider her next move. The bill did not pass with a veto-proof majority, so talk about what can happen.

MARY PAT CLARK: Well, that’s because one of our votes, Councilman Scott is out of the country. But he will be back. I just hope that the mayor will include talking to me, about what she decides to do.

JAISAL NOOR: The newly elected council people, talk about why you voted yes for this measure

KRISTERFER BURNETT: Like I said on the floor, we have a lot of people struggling in the city. It was very disheartening to hear testimony at the hearing, about the lack of… need for a livable wage for workers in Baltimore, when I know, for a fact, that there’s people in the city working two to three jobs just to barely keep the lights on.

Every year we discuss people losing their homes to water bills, people losing their homes to foreclosure, people being evicted and their things thrown on the street. And you talk to those folks, and it’s because they don’t have a living wage, they’re trying to just get by. And, you know, so much of the debate is around, you know, improving the quality of the workforce and sending people back to school and education, and I agree with all those things.

But, like I said on the floor, we can walk and chew gum, we can advocate for a livable wage, and also advocate for a pathway to an apprenticeship program, more workforce training programs, or invest money in our schools to make them stronger.

I mean, there’s a lot we can do to help people get along, and I think this is a great step in the right direction.

JAISAL NOOR: And so, some people say this is not enough. It might be enough for a single person, but for a family with kids, it’s still not enough. What do you say to people that say that?

RICARRA JONES: I’d say that I absolutely agree. I mean, I think $15 is the bottom, and it’s the minimal wage, and it’s just one step towards, I think, helping out residents of Baltimore City. We know it’s not going to fix all the problems, but we know it’s a step in the right direction, that the city has taken.

We’re glad the city council decided to act and listen to their residents, and made a bold step tonight.