TRNN concludes its coverage of the Jewish Voice for Peace 2015 National Meeting with closing remarks from Israelis and Jewish Americans and excerpts from the keynote speech by Angela Y. Davis

TRNN concludes its coverage of the Jewish Voice for Peace 2015 National Meeting with closing remarks from Israelis and Jewish Americans and excerpts from the keynote speech by Angela Y. Davis 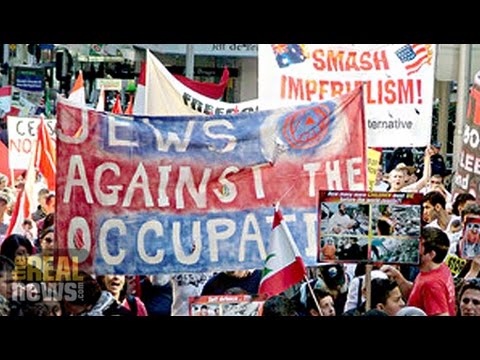 JAISAL NOOR, TRNN PRODUCER: Welcome to The Real News Network. I’m Jaisal Noor in Baltimore, where hundreds have gathered for the 2015 Jewish Voice for Peace conference to discuss how to end the occupation of Palestine.

CECILIE SURASKY, DEP. DIR., JEWISH VOICE FOR PEACE: This is really a historic gathering for us. We have 600 people, which is by far the largest member meeting we’ve ever had. We have hundreds watching at home. And it’s a chance for our membership and our chapters to come together to strategize, to learn, and to look at what the new stage of challenges are in this movement for a just peace in Israel and Palestine.

ANGELA DAVIS, POLITICAL ACTIVIST AND SCHOLAR: We are not waiting, which of course is the overarching theme of this wonderful conference. But as long as we do not assume responsibility for accelerating the processes that will bring about change, we will always be waiting. And so I wholeheartedly embrace this theme, we must act now. We cannot wait.

NOOR: Members of Jewish Voice for Peace say increasing numbers of American Jews are rejecting the positions of groups like AIPAC, whose annual meeting was used as a platform to push for war on Iraq by Israeli Prime Minister Benjamin Netanyahu earlier this month.

BENJAMIN NETANYAHU, ISRAELI PRIME MINISTER: An Iranian regime that is threatening to destroy Israel, that’s devouring country after country in the Middle East, that’s exporting terror throughout the world, and that is developing, as we speak, the capacity to make nuclear weapons, lots of them.

LIZA BEHRENDT, JEWISH VOICE FOR PEACE: AIPAC is looking more and more irrelevant and backwards in the current political climate. I mean, they still dwarf us in size, in money, but our political relevance in the mainstream is growing at a much faster pace and is much bigger considering our level of resources we have.

DAVIS: In 2015, Palestine is our South Africa. Like the anti-apartheid movement of the latter 20th century, the Justice for Palestine movement can not only lead to a political transformation in Palestine-Israel, but can also radically transform our movements, that is to say, globalize our social justice movements here at home. Racism is not simply a domestic problem. Homophobia is not simply a domestic problem. Involvement in the struggle for a free Palestine can radically transform our collective consciousness regarding our struggles for justice here at home.

NOOR: One focus of the meeting was building solidarity between struggles, including against anti-Semitism, the Israeli occupation, police brutality, and gendered violence.

DAVIS: First of all, we are really indebted to our Palestinian sisters and brothers for the insight that our campaigns against racist police violence cannot stop with demands that individual police officers be prosecuted.

And so we have learned how to take on the militarization of the police. Speaking out against the militarization of the police requires us to understand how deeply this state of Israel is implicated in this process of the trainings of U.S. police officers, etc. But, also, the Israeli military police in occupied Palestine have emerged as a model of how protesters should be dealt with everywhere. And this is why it appears as if we are witnessing the replication of their behavior in a small town called Ferguson, Missouri, and all over the country.

NOOR: We spoke to participants about the significance of the conference and why they feel there’s growing momentum in the American Jewish community to end the occupation of Palestine.

SURASKY: American Jews are not a monolith, just like any other group. In fact, we have never been more divided in our opinions when it comes to Israel and Israeli policy. And so many of us are extremely opposed, in fact, to the settlement policy. A recent poll that was done showed that 20 percent of American Jews support some kind of boycott of settlement-related goods, and 15 percent–which is really remarkable–support the boycott, divestment, and sanctions movement.

RONNIE BARKAN, ACTIVIST, BOYCOTT, DIVESTMENT, AND SANCTION (BDS) MOVEMENT: Those who grew up as Zionists, blindly supporting the state of Israel, can no longer defend it. It is–they see it as indefensible. So at the very least they are distancing themselves from Israel.

And we have many wonderful people also here today at the conference. The room is packed, and we see hundreds of people who are supporting BDS against a criminal apartheid state.

At the same time, I know that for some of them that has been quite a difficult process, because they grew up thinking one thing about Israel, and they have to realize that actually most of the things that they were told about that state is not true.

SURASKY: Where you see it most dramatically is in the dramatic growth of Jewish millennials, young Jews who are coming out in droves. You see it in this conference. We sold out this conference six weeks in advance again, and we hit the limit at 600 people, with hundreds watching at home. We could have had many, many more who–and our biggest area of growth, in fact, is college-age young Jews. There’s just no question. In the past year year, the number of chapters just at Jewish Voice for Peace have has doubled from 35 to somewhere between 60 and 70. Our mailing list increased by 60,000. Even our Facebook impact is dwarfing AIPAC, J Street, and other Jewish communal organizations.

BARKAN: We’re right now on a crossroad of an amazing gap between [incompr.] hope between complete, complete failure of a movement and a really hopeful time that things can change after the last operation in Gaza during the summer when we were exposed to some of the most hideous killing and massacre that happened in the last 20 to 30 years. We are waking up, the rest of the world is waking up and saying no more. We can stop. But we have to take this voice.

It won’t stop, definitely not, if the left Zionist party will win the election, because if people will think there’s the left party in the parliament right now, when they can let go, it’s the most dangerous thing that can happen.

Right now we’re in a crossroad between all races here in the U.S. People are starting to understand that your officers, your police, and your army are going training with our police down in Israel against Palestinian, learning how to deal with countering terrorism, but also counter civilian protesters. And they’re coming back here, like Timothy Fitch, the former head of police of St. Louis department, police that study in Israel in 2011 how to combat that civil protester. When you’re seeing tanks in your street, don’t say we didn’t warn you about it. It starts in Gaza, but it’s coming to New York and New England and the West Coast and Baltimore. It’s here. It’s already here on the streets for black young men, for Hispanic young men. The next one is everybody else. You are next in line.

NOOR: While this concludes The Real News’s coverage of the 2015 Jewish Voice for Peace conference, you can go to TheRealNews.com to see all our coverage.