The ruling is a major setback for the Islamophobic agenda of President Donald Trump, says Center for Constitutional Rights fellow Noor Zafar

The ruling is a major setback for the Islamophobic agenda of President Donald Trump, says Center for Constitutional Rights fellow Noor Zafar 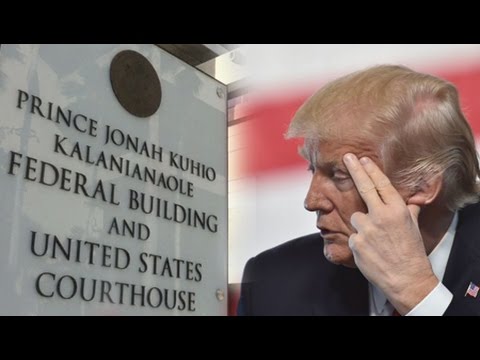 JAISAL NOOR: The Trump administration is now 0 for 2. Both versions of its Muslim ban have now been blocked by the courts. On Wednesday, just hours before it was supposed to take effect, Trump’s ban on refugees and the granting of visas from six Muslim majority countries was blocked by Federal District Judge Derrick Watson, in the case argued by the State of Hawaii.

DOUG CHIN, ATTORNEY GENERAL OF HAWAIIl: That’s a big reason why Hawaii brought this case, is because it’s really something that hits us to the core. If you have an order that’s coming out there that’s taking us back half a century to a time when there was discrimination by nations of origin or by religion, that’s something that we have to speak up against.

JAISAL NOOR: Hawaii contended Trump’s revised ban signed March 6th, had not changed. Essentially it was still unconstitutional because it discriminates against Muslims or arguing that would impact tourism, in which the state heavily relies.

We reached Noor Zafar, a Fellow at The Centre for Constitutional Rights.

NOOR ZAFAR: For me this was kind of a bit expected. I’m glad that this is how the judge ruled and I’m particularly happy that the judge ordered a nationwide stay on the TRO as opposed to what we saw out of, I believe it was Minnesota earlier where relief was just granted to the individual plaintiff. So I was really happy to see that the judge, for all the reasons that I think legal experts and advocates were anticipating, decided to halt the application of the Muslim ban, I guess, 2.0.

JAISAL NOOR: Can you talk about what this means for the Trump administration’s efforts to block Muslims from selective countries that they’ve selected?

NOOR ZAFAR: I think this is a significant blow for those efforts. Particularly because, you know, the main section [of] the Hawaii judge’s ruling kind of talked about how the intent to discriminate against Muslims is very apparent, both in this new order and in the previous order.

And that intent is really going to stay because of all the various Islamophobic and anti-Muslim statements that Trump and his administration officials have made both pre and post election. So I think that the courts increasingly are realizing that this is a ban on Muslims. This is kind of Donald Trump making good on his campaign promise to ban Muslims from this country. And I think courts are seeing kind of just the blatant anti-Muslim animus behind the ban. And in terms of the seven, I guess now six countries listed in the second EO, being countries where the U.S. has had a role in kind of destabilizing those countries, I think that’s apparent. And I think that’s kind of something that’s in the background, especially when it comes to the halt on refugees.

Like, in terms of when we saw the mobilization of people at the airports and we saw kind of grassroots activists and people speaking out, part of that I think was an acknowledgement that the U.S. had a role to play in creating this massive refugee population, and creating conditions of instability in those countries where people are fleeing from. So I think that acknowledgement definitely animates a lot of the people-powered protests that we saw against the ban.

JAISAL NOOR: So the Trump administration has argued that these bans are necessary to keep Americans safe. I wanted your response to that, and as well as, what’s your messages for people that are concerned about this, because the fight’s not over. This is just a temporary ban. Can you respond to both those points?

NOOR ZAFAR: Right. So with regard to the first point, I think, again, people kind of see through just the blatant lie that is the fact that this ban is needed to keep Americans safe. And we saw this kind of in the second iteration of the Muslim ban, the administration presented a little bit more evidence justifying its listing of these six countries and offering, for example, the statistic that 300 individuals who have come into this country as refugees are under FBI counter-terrorism investigation.

But that statistic is really unclear and problematic in a lot of ways. One, we don’t know if the refugees or the people under investigation are indeed from the six countries that are listed. And two, you know, we’ve seen in the way in which FBI counter-terrorism charges and prosecutions and investigations are launched, there’s a wide variety of very non-criminal and not even close to criminal conduct that can lead the FBI to open an investigation.

You know what, if we kind of parse that number a little bit I think it doesn’t hold up. It doesn’t justify the drastic measure of banning people from these six countries. So I think, you know, the evidence, again, is just not there and the whole national security rationale, there’s no numbers to back it up. And given, again, the clear anti-Muslim animus that we know this administration espouses, courts see through that national security pretext and are really seeing this as it is, which is a Muslim ban.

NOOR ZAFAR: I think the most important thing to do is to maintain that energy of coming out and protesting this ban. I think, you know, when the initial ban came out, the courts ruled the way that they did, I think in no small part, because of the massive airport protests. I think just the mass of people who came out and said, “This is not something that we’re going to stand for,” indirectly, I think, really influenced the way that the courts approached this issue.

And I think moving forward, especially if the administration really tries to refine its legal arguments and clean up the sloppiness of the initial iteration of the ban, I think it’s going to be even more important for people to continue to come out, to continue to protest, to continue to resist this type of blatant bigotry.

Noor Zafar is a Bertha Justice Institute Fellow in the Guantanamo docket at the Center for Constitutional Rights. Noor earned her J.D. from Harvard Law School, where she served as co-president of the Muslim Law Students Association, executive editor of the Harvard Journal on Racial and Ethnic Justice, and a student attorney with the Iraqi…