At the annual American-Israel Public Affairs Committee conference, speakers advanced Iran as an existential threat and sought to downplay differences between Israel and the US while demonstrators were arrested outside

At the annual American-Israel Public Affairs Committee conference, speakers advanced Iran as an existential threat and sought to downplay differences between Israel and the US while demonstrators were arrested outside 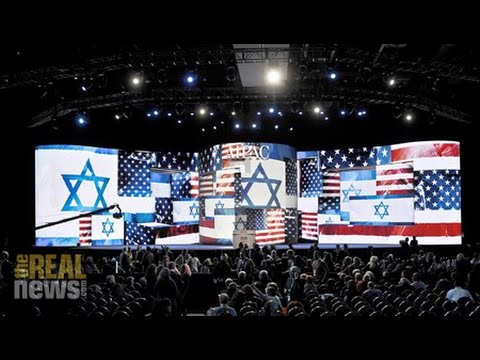 JAISAL NOOR, TRNN PRODUCER: In Washington on Monday, March 2, peace activists were violently arrested outside the 2015 AIPAC conference, charging that Israeli Prime Minister Benjamin Netanyahu was increasing the threat of peace by attempting to torpedo a nuclear deal with Iran. Speakers at the AIPAC conference agreed for the need for continued U.S. strategic support for Israel in the region.

BENJAMIN NETANYAHU, PRIME MINISTER OF ISRAEL: I plan to speak about an Iranian regime that is threatening to destroy Israel, that’s devouring country after country in the Middle East, that’s exporting terror throughout the world, and that is developing, as we speak, the capacity to make nuclear weapons, lots of them.

This was followed by President Obama refusing to meet with the Israeli prime minister on his visit to Washington and Vice President Joe Biden and 56 congressional Democrats vowing to skip his speech.

Under domestic and international pressure, Netanyahu had a conciliatory tone and said he did not intend to disrespect Obama, the office of the president, or divide Congress.

NETANYAHU: The last thing that I would want is for Israel to become a partisan issue. And I regret that some people have misperceived my visit here this week as doing that.

SAMANTHA POWER, U.S. AMBASSADOR TO THE UN: I am struck that when I read about alleged policy differences on the Iran nuclear negotiations, I rarely see mention of the foundational strategic agreement between the United States and Israel, an agreement that undergirds our entire engagement with Iran.

NOOR: author and activist and Institute professor emeritus at MIT Noam Chomsky responded to Netanyahu’s speech on Democracy Now! by noting the hypocrisy of the U.S.-Iranian position.

NOAM CHOMSKY, LINGUIST AND POLITICAL COMMENTATOR: The striking aspect of this is the chutzpah involved. I mean, Israel has had nuclear weapons for probably 50 years or 40 years. They have very–estimates are maybe 100, 200 nuclear weapons. And they are an aggressive state. Israel’s invaded Lebanon five times. It’s carrying out an illegal occupation, carries out brutal attacks like Gaza last summer.

POWER: The Obama administration has invested more than $20 billion in foreign military financing for Israel, far more than for any other country, and more than at any previous time in the history of the U.S.-Israel relationship. We believe diplomacy is the preferred route to secure our shared aim. But if diplomacy should fail, we know the stakes of a nuclear-armed Iran as well as everyone here. We will not let it happen. There will never be a sunset on America’s commitment to Israel’s security.

NOOR: Journalist Alex Kane says statements like this mean supporters of Israel never want a domestic debate over U.S. support for Israel and what its role should be in the region.

ALEX KANE, JOURNALIST: It says a lot about the U.S.-Israel relationship that all of these officials are decrying people that say that Israel’s becoming politicized. As Netanyahu said, Israel should always remain a bipartisan issue.

What does this actually mean? It means that Netanyahu and other pro-Israel members of Congress want Israel to never have it be discussed in the U.S. as a political matter. I mean, debating how the U.S. should relate to Israel, debating whether the U.S. alliance with Israel, is a good thing. The fact that they said this is an indication that they’re worried that the issue of Israel may become politicized. And it is, slowly but surely, at least among sort of grassroots base of the Democratic Party. That’s not to say that the U.S.-Israel alliance is on shaky ground. It is on very firm ground. But you do see somewhat of an upsurge in criticism of Israel among Democrats.

NOOR: Go to TheRealNews.com for full coverage of Netanyahu’s congressional address. From Baltimore, this is Jaisal Noor.