Maryland Police Reform Advocates and Opponents Speak Out Prior to Hearing 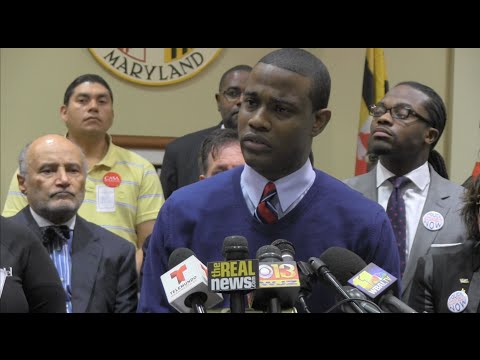 JAISAL NOOR, TRNN PRODUCER: In Annapolis today, police reform advocates and opponents spoke out for and against multiple pieces of legislation being heard today that could make significant changes to how communities hold officers accountable for abuse.

MARY ANN HOPKINS, MOTHER OF GARY HOPKINS JR.: I’m the mother of 19-year-old Gary Hopkins Jr. that was killed by police brutality Nov. 27, 1999. So I’m here today not only for my son and my family, but I am here on behalf of mothers that are united across the United States of America who say that we’re tired. We’re saying that these bills will hopefully bring about police accountability and somewhat justice to the families that have lost their loved ones.

VINCE CANALES, PRESIDENT, MARYLAND STATE FRATERNAL ORDER OF POLICE: This is just a outright attack on law enforcement. It’s an attempt to criminalize law enforcement officers throughout the state of Maryland.

NOOR: The ongoing push for police reform that some have described as historic comes after months of protest and demonstrations in Baltimore and across the country against high-profile cases of brutality and a Baltimore Sun exposé that found the city had settled over 100 cases of alleged brutality to a tune of over $5.7 million.

JILL P. CARTER, MARYLAND DELEGATE (D-41): There should never be a death sentence rendered by an officer on the street with no charge, no prosecution, no conviction. So we’re here to change that. The time is now. Protests across this country have shined a spotlight on the dysfunctional relationship between individuals and certain communities and law enforcement. Just as Maryland has taken the lead on so many other progressive things, it’s our responsibility to take the lead on this issue to change it.

NOOR: Delegates like Baltimore’s Jill Carter are championing the reforms in the legislature which would do away with the ten-day rule, which gives officers ten days after they’re suspected of wrongdoing to speak to investigators.

CANALES: We’re in opposition to that bill. And in all actuality, it’s not just changes. It’s actually a wholesale gutting of the bill in and of itself. It would actually take away a law enforcement officer’s due process rights as far as that’s concerned.

SARAH LOVE, PUBLIC POLICY DIRECTOR, ACLU-MD: We at the ACLU believe in due process rights. We believe in rights to attorneys. Criminal justice experts have looked at the Maryland Law Enforcement Officers’ Bill of Rights and said that it is way out of whack with the balance that has been struck across the country in other states that have these laws. All the proposed changes do is to increase transparency and accountability. So, as someone said earlier, those law enforcement officers who have nothing to fear shouldn’t worry about these changes, because these changes are intended to affect those law enforcement officers who break the law and who are not held accountable.

NOOR: Another bill would regulate police body camera use. The Baltimore FOP has reportedly come out in support, and the state FOP say they don’t have a position on it.

LOVE: Surprisingly, given that law enforcement was on the mayor’s task force, they have signed up in opposition to Senator Ramirez’s bill. Some of them have–the suggestions that they have were to basically gut the bill and leave everything up to law enforcement. That’s unfortunate, because you shouldn’t have individuals’ privacy up to individual agencies. In addition, the key purpose of these cameras is for accountability and transparency, and you can only have that if you have trust that they will be used consistently.

So if individual jurisdictions make up their own rules or don’t have rules and citizens don’t know when the camera will be on, when it will be off, be notified that they’re going to be recorded, there’s no accountability, there’s no transparency, there’s no trust. And these cameras have no value.

NOOR: But the head of Maryland’s FOP says he’s opposed to a measure that would authorize the state prosecutor to investigate officers accused of unlawful killings.

CANALES: This is the problem that I ultimately see. I think it’s a lack of communication and a lack of training and information being provided to the community on the number of checks and balances that already exist. Adding another set of eyes or another individual into an already long and tedious process is not going to wind up making people any happier. And I’ve said this before. I said, what happens when a special prosecutor sits and returns a decision that you don’t agree with? Now you want another person to review the state prosecutor’s issue?

DAYVON LOVE, LEADERS OF A BEAUTIFUL STRUGGLE: I mean, to be honest, I think there is a mentality or a culture in law enforcement that sees the community that they police as criminals to be surveilled and not to be protected. There is a general feeling, particularly when we’re talking about African-descendent people, us being represented as really criminals, as not human beings. And so that whole mentality, I think, permeates–I mean, it’s really the only logical explanation for why an institution like that would be opposed to the community they serve being a part of the process for how officers conduct themselves in their communities.

NOOR: The Real News will keep following this story. From Annapolis, this is Jaisal Noor.