TRNN speaks to United Steelworkers spokesperson Lynne Hancock who says the union is demanding improved safety for its 30,000 members and their communities

TRNN speaks to United Steelworkers spokesperson Lynne Hancock who says the union is demanding improved safety for its 30,000 members and their communities 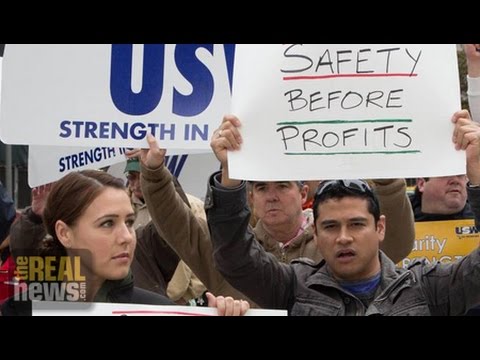 JAISAL NOOR, TRNN PRODUCER: The union representing 30,000 oil workers has rejected the latest industry offer over health and safety concerns. Members of United Steelworkers are preparing to enter the third week of their strike, and reports indicate the industry’s biggest strike in three and a half decades may spread as the union has reportedly asked other locals to prepare to join the picket lines.

Industry negotiations are being led by Shell Oil. They did not respond to an interview request, but said on their website, Shell continues its dialog with USW for the second straight day in hopes of reaching a mutually satisfactory agreement. Union supporters said Wednesday’s massive ExxonMobil refinery explosion that injured four workers underscored the need for enforceable improvements for safety conditions. The plan had a history of safety violations in previous explosions.

LYNNE HANCOCK, SPOKESPERSON, UNITED STEELWORKERS: Yeah, the oil industry is the most powerful and the richest in the world. But we know that we have a lot of solidarity among our members in the community and that we are fighting for safer refineries, not only for the employees, but also for the surrounding communities. And that’s why we’re out walking the line, because we need to hold the oil companies accountable for health and safety within their facilities.

NOOR: She describes some of the reasons the workers are going on strike.

HANCOCK: Our workers are working 12-hour shifts for a number of weeks. And that excessive overtime is causing them to feel fatigued. And when you’re fatigued, you could accidentally make mistakes. And those mistakes in a refinery or petrochemical plant can be very deadly and lead to such an event as an explosion or a fire. And when that happens, it negatively affects not only the employees, but also the surrounding community.

We’re also concerned that our full-time maintenance people who handle daily maintenance are being replaced when they retire or leave with contractors who don’t receive the same high-quality health and safety training as the full-time employees, because the full-time employees are represented by our union and they get a lot of–we have a lot of health and safety training programs to help them. In addition, a full-time daily maintenance worker understands the ins and outs of these facilities, and they can spot something that might go wrong a lot faster than an untrained contract worker who isn’t familiar with these facilities as much as the full-time people.

We are convinced that we will prevail, that we will prevail one day longer than the oil companies. And we know that we have the facts on our side and that it comes a time when workers have to say enough is enough. And that’s what our oil workers are saying.