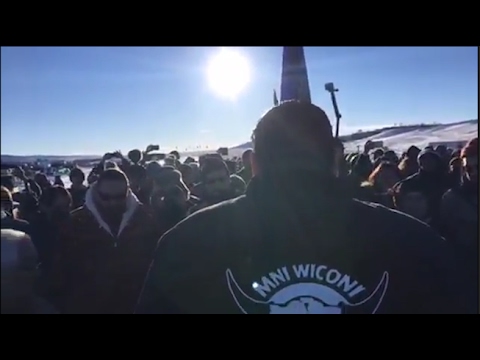 JAISAL NOOR: As thousands of activists and veterans say they’re returning to Standing Rock, to prepare to block its completion.

WOMAN: … and capitalism. We are all related. So I ask you to join with me in a prayer, a prayer for protection.

WOMAN PROTESTOR: So, call on our ancestors, our helpers, the intelligent portions of nature.

JAISAL NOOR: Banks, such as Wells Fargo, that invest billions in the Dakota Access Pipeline, were targeted by water protectors in cities like Chicago, and San Francisco.

WOMAN: …this is not okay. People in these government agencies need to stand up, and they need to be courageous, and they can’t just keep following orders. This isn’t legal, what is happening. They’re bypassing (inaudible), processes are supposed to happen…

DALLAS GOLDTOOTH: What we are seeing, is a mass mobilization of people, all across this country, dedicated to building a sustainable and healthy future, and stepping ourselves away from fossil fuel development. And I think that what we’re seeing right now on the ground, mass civil disobedience, mass actions, is that we are not going to be governed by the tyranny of Donald Trump.

Donald Trump continues to threaten our ability as indigenous people to self-determine for ourselves, our future, our lives, our body, our water, our land, and we’re going to say, “No more.” As long as Donald Trump continues to try to push this pipeline across our lands, we’re going to rise up in resistance. And we’re asking our allies, all across the country, to rise with Standing Rock, stand in solidarity and shut the system down.

JAISAL NOOR: Protests were also held in New York, Washington, D.C., Annapolis — among other cities. The $3.8 billion, 1,100-mile pipeline has been opposed by the largest Native American convergence in over a century, who along with allies, helped President Obama to push it to delay its construction and request an environmental impact study.

But under Donald Trump, whose administration is heavily invested in the pipeline, the Army Corps of Engineers has just cancelled that environmental review, and granted Energy Transfer Partners permission to construct the pipeline’s final mile, which runs under the Cannonball River, and is adjacent to the Standing Rock Sioux Reservation. They say it threatens their water supply and sacred sites.

The pipeline was originally to run through Bismarck, North Dakota. But after public outcry, the route was changed. Donald Trump recently said he hasn’t heard from anyone upset at the pipeline’s approval, and said it will bring badly needed jobs.

Because it was unfair, years of getting approvals, nobody showed up to fight it. This company spends a for… a tremendous –- hundreds and hundreds of millions of dollars –- and then all of a sudden people show up to fight it. Not fair to our companies. And I think everyone’s going to be happy in the end.

JAISAL NOOR: On Wednesday, former Interior Secretary, Sally Jewell, said in an interview that the Army Corps of Engineers was reneging on its commitment to other federal agencies, and most importantly tribal leaders, to conduct an environmental review of the Dakota Access Pipeline, that’s reported by the Washington Post. Donald Trump has slammed former Secretary Jewell.

This fight will continue to go on. We’re looking at trying to defend our water, our land, by any means possible within the tenets of non-violent direct action.

DALLAS GOLDTOOTH: What started out as just 20 people, in the middle of a prairie, in a grassroots fight against the multi-billion dollar corporation, has now developed into millions of people taking to the streets. Speaking up and telling… and just telling their story, about why it’s important for us to protect the water, to defend the sacred.

And that fight doesn’t end now. We keep on moving ahead. We keep on pushing. We keep on using our power as people, to effect lasting change. And, you know, we have amazing allies who have stood with us, whether they were in the previous administration, or whether we have new ones in this new administration, we’re going to ride us up together, and make sure that this pipeline does not get built.

Standing Rock is just the tip of the spear, in this movement of movements that we’re seeing all across this country, of people coming together, speaking up for, and calling and demanding for justice. Whether it’s economic justice, housing justice, food justice, gender justice.

All these things are all tied together, because we’re trying to build a better world and a better society, for all our peoples and for all the land itself. So, we keep on pushing, we rise, we resist, we thrive.