TRNN's Jaisal Noor speaks to advocates and attorneys about the latest in the case of the Baltimore-area man made famous on the Serial podcast. Correction: Asia McClain was a classmate of Adnan Syed, not a friend

TRNN's Jaisal Noor speaks to advocates and attorneys about the latest in the case of the Baltimore-area man made famous on the Serial podcast. Correction: Asia McClain was a classmate of Adnan Syed, not a friend 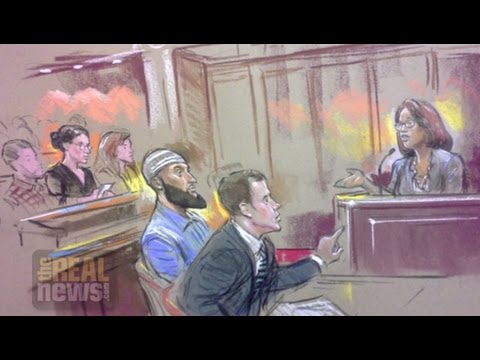 JAISAL NOOR, TRNN: Adnan Syed, the Baltimore County man convicted of killing his high school girlfriend whose case was made famous by the wildly popular podcast Serial, was back in court this week seeking a new trial. Syed, now 35, appeared in a prison jumpsuit in a courtroom packed with family members, supporters, and the producer of the podcast. He is serving a life term for the murder of his 18-year-old ex-girlfriend Hae Min Lee in Baltimore in 1999. His new defense attorney, C. Justin Brown, argued before the court that Syed had ineffective assistance by trial counsel before his conviction.

DOUG COLBERT: The government’s strongest argument is, will be to challenge the Constitutional defective performance of Attorney Gutierrez. And so they are going to argue that everything that Ms. Gutierrez did was a legal strategy, and not evidence of ineffective assistance of counsel.

RABIA CHAUDRY: The attorney didn’t do her job, right. I mean, like, in a murder case where there is no forensic evidence, which is what happened here, there is not a shred of physical evidence tying Adnan to the murder, even though they tore up his house, tore up his car, tested everything they could. They found nothing to match him. All they had was a witness. A really terrible witness, by the way. And so the testimony of a really credible alibi witness would have probably gotten him acquitted.

NOOR: An alibi witness was exactly what Serial unearthed: a [classmate] of Adnan, Asia McClain, who places Adnan at their school library at the time he’s accused of killing Lee. During the hearing she testified in court for the first time, and said that Syed’s former lawyer Christina Gutierrez, who died in 2004, never contacted her.

CHAUDRY: His lawyer actually never even contacted the alibi witness, despite the fact that this is the witness who reached out to Adnan a number of times, saying hey, I remember being with you at the time the state is saying that this girl was–you know, Hae Min Lee was killed, and Adnan telling his attorney and asking her over and over again to contact–.

NOOR: Also testifying was a school librarian, who said that Woodlawn High library did have video surveillance. But since the footage was never requested by Gutierrez, it was erased after 30 days.

Arguing for the state, Maryland Deputy Attorney General Thiruvendran Vignargian rejected the defense’s claim, telling the court the evidence was overwhelming, that Syed had committed the murder. Outside the courtroom he read out a statement from Hae Min Lee’s family. Despite the notoriety of the case, the real victim, the family said, was Lee.

THIRUVENDRAN VIGNARGIAN: Our family has lived without a heart for 17 years. And we continue to grieve every day in private. The immediate family members have decided not to attend this hearing, but we are grateful for all the people who are there and will be there to support us and to give Hae a voice. She is the true victim. Although this has made us relive a nightmare we thought was behind us, we thank the state for standing up for us and continuing to seek justice. We believe justice was done when Adnan was convicted in 2000, and we look forward to bringing this chapter to an end so we can celebrate the memory of Hae instead of celebrating the man who killed her.

NOOR: The defense also argued Gutierrez failed to challenge a key detail in the cell phone evidence used by the prosecution to place Adnan at the scene of the crime. The cover letter to that evidence came with a disclaimer it’s unreliable to establish locations of incoming calls. In court, cell phone expert Gerald Grant said those instructions should have been followed.

CHAUDRY: Part of the issue here is that we think the prosecutor actually withheld some documents from the defense that would have actually helped Adnan’s case. So the cell–they relied heavily on these incoming cell phone towers to kind of track his location. And the very cover sheet from the cell phone company said that incoming calls–it literally said, it spelled it out, incoming calls are not reliable for a location. That sheet was missing. It was not submitted to the court. It was not in evidence.

NOOR: Also observing the proceedings was University of Maryland law professor Doug Colbert, who represented Syed when he was denied bail after his arrest.

COLBERT: And there were an enormous outpouring of support from Adnan getting bail, and they were [inaud.] a dozen people prepared to put their homes up as collateral. The prosecuting attorneys made a series of allegations which they later apologized for mis-stating, misconstruing. They were false arguments. But they argued in a sense that the people who were in court, about 80 people from the community, were not there to assure that Adnan would return to court, but were there to help him escape to Pakistan, where the prosecutor claimed there was an uncle who made people disappear.

Those comments were found to be untrue, and two weeks later the prosecutor apologized, but led the judge to agree to deny Adnan bail.

NOOR: He says by taking away Adnan’s freedom the court severely hurt his chances of justice.

COLBERT: Had he been released, I am absolutely convinced that the jury would never have found him guilty. The difference today between people who are, who can regain their freedom and people who stay in jail until trial, shows that people are far more likely to receive an acquittal, not be convicted of a crime, when they can prepare their defense with their lawyer when they retain their freedom.

So it was a critical decision, and it has played very heavily in Adnan Syed being convicted at his second trial.

NOOR: The hearing is expected to continue until at least next week. Chaudry said she hopes the case helps [inaud.] systemic reform of the criminal justice system.

I feel like if, if people in the system were officers of the law, of the court, public servants are held accountable for their actions, they’re not going to act like they just have power to do whatever they want anymore. And we have to take some of that power back.

NOOR: For the Real News, this is Jaisal Noor.