Porter must testify against officer Caesar Goodson in exchange for immunity against the prosecution using his own words against him. TRNN gets dueling perspectives on the case from the defense attorney Warren Brown and University of Maryland Law professor Doug Colbert

Porter must testify against officer Caesar Goodson in exchange for immunity against the prosecution using his own words against him. TRNN gets dueling perspectives on the case from the defense attorney Warren Brown and University of Maryland Law professor Doug Colbert 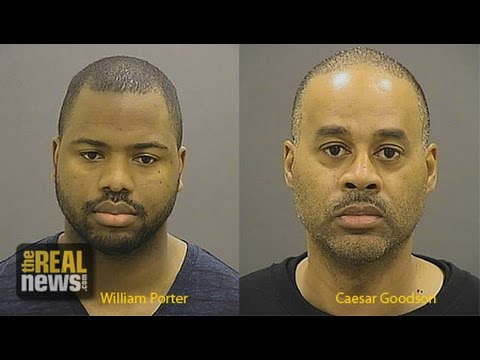 JAISAL NOOR, TRNN: I’m Jaisal Noor for the Real News Network in front of Courthouse East in Baltimore, Maryland, where Judge Barry Williams has just ruled he is going to compel Officer William Porter to testify against fellow officer Cesar Goodson. Porter was the first of six officers to face trial for the death of Freddie Gray. His trial ended with a mistrial, a hung jury, last month. Cesar Goodson’s trial starts next week with jury selection.

Porter’s defense had argued he should not be compelled to testify because he may incriminate himself. The prosecution gave him immunity.

We spoke to two legal experts, Doug Colbert, University of Maryland law professor, and Warren Brown, a prominent defense attorney in Baltimore, to get dueling views of how this ruling may impact the trial of Cesar Goodson.

How big of an impact will this make on Goodson and Alicia White’s case?

DOUG COLBERT: Well, I mean, the prosecution had a big victory today. And it wasn’t surprising. I think I said earlier today that it looked to me that this was just something that the prosecution does. They grant immunity. It protects the witness against self-incrimination, because they can’t use the witness’s testimony against him. But it also allows the government to prosecute. Otherwise every time you had co-defendants they’d all gang up together and say, look, everybody keep quiet. Let’s, let’s have a code of silence. Let’s not cooperate.

WARREN BROWN: You know, it might be a Pyrrhic victory. And the reason I say that is the most support it gives them is that he informed Officer, Sergeant White and Officer Goodson, that the man, Freddie Gray, was requesting a medic. That’s it. It’s not that, they, he’s on death’s doorstep, you need to get him to the hospital right away. Simply that he’s requesting a medic. There’s never been a case like this where the person who is standing trial is forced to take the stand in another case before they go to trial. Of course, Bill Porter had a trial earlier, a hung jury. So he still has a trial forthcoming, I think scheduled for June. So there’s never been a case where the defendant is forced to be a witness in another case where he or she could potentially incriminate themselves.

COLBERT: What’s never happened before is to prosecute police officers. I mean, when you look at it, you know, the research shows that there’s been four convicted police officers in the last ten years throughout the country. So we’re dealing with something that’s brand new, here. And the local prosecutor is doing something that most local prosecutors never do. They’re not only bringing charges, but they’re determined to convict. This is highly unusual.

COLBERT: As they should. They should certainly get a ruling. We don’t have a ruling from our state’s highest court. And it is possible that an appellate court will make a different ruling, but I doubt it. On the face of it, it’s a very clear statute that’s being applied, and what it says to the government is that we are going to prosecute people who we believe are criminals. And we’re not going to allow any of the co-defendants to block a prosecution of the next co-defendant.

COLBERT: How? I think the prosecutors will be able to prosecute Officer Porter again if they choose to, based upon the testimony and evidence that was presented at the first trial. I don’t see the granting of immunity as blocking a second trial of Officer Porter. The prosecution has sufficient testimony and evidence that it will not be tainted by anything that takes place at Officer Goodson’s trial.

REPORTER: So Porter, he gets on the stand, because–and what can happen then, if he gets on and he says Fifth Amendment?

BROWN: Well, then the judge can hold him in contempt. He would then be subject to sanctions, which more likely would be jailed, until the case was over or until he testifies in court.

Would the Cops Be Convicted if #FreddieGray was White?

‘The Law Has Always Been in the Favor of Law Enforcement’