John Nichols: The President is not a progressive, but speech promises a more reformist stand

John Nichols: The President is not a progressive, but speech promises a more reformist stand 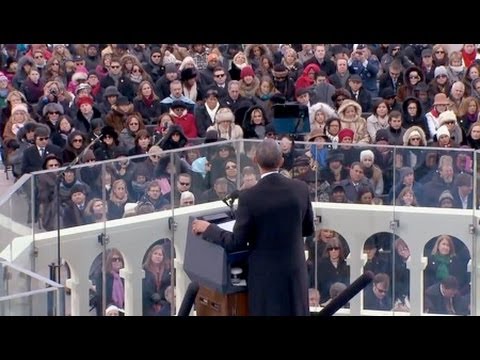 In Washington on Monday, President Obama began his second term. Now joining us to give us his take on the president’s inaugural address is John Nichols. John is a political writer for The Nation magazine and joins us from D.C. Thanks for joining us, John.

JOHN NICHOLS, WASHINGTON CORRESPONDENT, THE NATION: I’m honored to be with you.

JAY: Thank you. So did you get any sense from the inaugural address whether the next four years will be much different than the last four?

NICHOLS: Absolutely. You do. It doesn’t necessarily mean that they will be better or worse, but you get a signal from the inaugural address. And people ought to read it closely.

Presidents expend political capital in two speeches following a reelection. The first of those speeches is the inaugural address. They know they have to say something different than what they said four years earlier, because things are different. And so they go for a deeper perspective. You usually hear a little more there. And then shortly thereafter they do a State of the Union address.

This wasn’t a perfect address. There’s plenty of things I would have rather have heard said, etc., etc. But the bottom line is, here’s a president who expended political capital talking about gay rights and marriage equality, talking about immigrants and immigrant rights, talking at some significant length about this theory of the right, the austerity-based theory that says that, you know, we’ve got makers and takers, and not only pushback specifically against that line, which is a wonderful thing, but really did at a number of points talk about the fact that, you know, when we pay people well, that’s good for society. When government does some things, that’s good for society. This wasâ€”it’s not a Franklin Roosevelt speech, it’s not a perfect speech, but it was a significantly more progressive speech than I expected.

And it was also part of, again, an arc coming off the election in which this president took a bolder stand than we expected on gun issues, fought a little bit more effectively, I think, on the fiscal cliff issues, and so now he gives a reasonably progressive speech. I would have to say I am cautiously hopeful.

JAY: But is it really that different than what, for example, he said in the presidential campaign in 2008?

JAY: And then, when he gets elected, when you put meat on the bones of what he’s actually going to do, you know, we wound up with a finance team that was essentially, you know, representatives of Wall Street. The new Treasury secretary, Jacob Lew, is more or less more of the same. He talks again about the importance of deficit fighting. I didn’t hear much about whether it be stimulus or, for example, those words, EFCA, you know, the Employee Free Choice Act that was supposed toâ€”.

NICHOLS: No, you didn’t hear that.

NICHOLS: You didn’t hear that.

JAY: You didn’t hear anything.

NICHOLS: You didn’t hear anything good on trade policy. There’s a lot of things you didn’t hear good stuff on. But let meâ€”Paul, you’ve covered this long enough and you’re smart enough to know that, you know, from a Democratic president we’re never going to get a fully progressive agenda. That doesn’t happen. Unfortunately, the Democratic Party isn’t that anymore, if it ever was.

I was with Obama in the last, you know, few days, week or so of his campaign, and I heard him giving, you know, very, very populous speeches, economic populist speeches, with Bruce Springsteen at his side, talk about we take care of our own. And what I heard in this speech was some connection to that.

That’s important, that this president hasn’t broken the connection with the campaign that reelected him. And I think he did do that in 2009. I think that he came off an incredibly hopeful, incredibly energetic campaign in 2008 and then gave a 2009 inaugural address that was (A) kind of empty, there wasn’t a lot of depth there, and (B), to the extent that he did say anything, it tended toward a relatively conservative approach. This was not an energized president.

JAY: But when he says in this speech, you know, we have to cut health-care costsâ€”but I’m not sure what he means, unless he’s talking about Medicare reform, and that’sâ€”and he says we have to make the hard choices. I mean, we’re all moving towards this ‘nother debt ceiling piece of theater. And, you know, Bill Black’s coined this term the grand betrayal. People are concerned that this is where he’s heading. Doesn’t this language suggest that that is where he’s heading?

NICHOLS: His language has suggested that forâ€”going back to before he was a presidential candidate.

The fact of the matter is that we have always wrestled with Barack Obama on this issue. And there are statements by Barack Obama from way, way back that are very unsettling. The thing that you want to look for here is that when he did get into talking about Medicare, Medicaid, talking about some of these commitments, he expressed a relative level of commitment there, a relative level of desire to do the right thing.

The Republican Party is in such absolute disarray right now that they are far less effective at putting their position than they were even a few months ago. And so there’s a tremendous opening here for the coalition that reelected Barack Obama to ask things of Barack Obama.

The question is: is he going to push them away; where’s the openness there? In this speech, I heard a significant amount more openness than I expected. And what I think is that is not a commitment from Obama. Anybodyâ€”you know, I’m unbelievably tired of people who psychoanalyze Obama or try to figure out where he’s coming from or what he’s going to do. It’s quite clear this guy responds to pressure.

And so what I hear from this speech is essentially a call to progressivesâ€”not from him, but what progressives should take as a callâ€”to listen to what he’s saying, recognize that there is at least a relative sympathy there or some openness, and to raise the pressure to a much higher level. [crosstalk]

JAY: Speaking of pressure, I mean, the one force that you would think has some leverage to exercise pressure is the trade unions.

JAY: And, you know, back in ’08 there was actually some bones thrown to the trade unions. It didn’t go very far, but EFCA was one, and also some rhetoric about the importance of unions. And we didn’t hear a word now. And I guess this is more a critique of the unions.

JAY: They seem to have no leverage anymore at all at all.

NICHOLS: Barack Obama doesn’t think about unions very much, and you didn’t hear much in his first inaugural address about unions, you didn’t hear much in any of his State of the Union addresses. This is not where this guy’s coming from. And he, I think, tends to see unions as part of a broad coalition, and he is relatively respectful of them in that context, but not in the way that we see trade unions historically in America or, certainly, in a lot of other countries around the world.

What I think is again important is not what Obama says about the unions; it’s what the unions say to Obama, and it’s what these coalitions of environmental groups, trade union groups, community groups, civil rights groups say to him.

And I’ll give youâ€”just to put a little perspective here, imagine a decade ago an American president saying from Seneca Falls to Selma to Stonewall, making that connection between women’s rights, civil rights, and gay rights. Imagine an American president doing a lengthy soliloquy on marriage equality in a speech. There is a response to a community, the LGBT community, which has for a long time, you know, pushed on this issue to a real change in society, and Obama responding to it. That’s not Obama leading; that is Obama following. It’s him responding.

Similarly, with the trade union movement, and, I think, with economic justice folks in general, there’s never been a more important time to make demands of him and to pressure him.

Now, you suggestâ€”I think, correctlyâ€”that the trade union movement has been pretty battered in the last few years. You’re right. But what I heard in that speechâ€”I didn’t hear anything in that speech that said, you know, if you guys ramp it up, I’m going to push you away. And so I think that’s what to take away from it.

All I will tell you is that Obama’s speech was a decidedly more progressive speech than we have heard from a president, Democrat or Republican, in a very, very long time. Now, you look back and you look at the referencing in this speech, and you say, well, you know, who does that compare to, I would suggest to you that you’ve got to go back to probably Lyndon Johnson in 1964 to hear somebody kind of referencing, talking about the importance of work, talking about poverty, referencing some environmental stuffâ€”not always as deep as I’d want to go. So give Obama that, but then don’t expect that it’s going to be any easier with Obama than it was with Lyndon Johnson or with Franklin Roosevelt. You’re still going to have to make demands.

JAY: Alright. Well, let’s see how these words translate into action. Thanks very much for joining us, John.

NICHOLS: You guys do great work. I’m so pleased to join you on this day.

JAY: Alright. Thanks much.