Ethnocracy: Who Owns the Land of Israel?

On Saturday, June 12th, Israeli forces demolished the Bedouin village of Al Araqib for the 70th time. The land the Bedouin village sits on was given to the Jewish National Fund (JNF) by the Israeli government, and the Bedouin were reclassified as "infiltrators" on lands they've registered as far back as the Ottoman Empire. In this second part in our series on Ethnocracy, a term coined by Israeli professor Oren Yiftachel to answer the question of whether Israel is a democracy, we look at who owns the land of the state of Israel and how it came to be so. The Real News' Lia Tarachansky also speaks to attorney Suhad Bishara and historian Noga Kadmon.

On Saturday, June 12th, Israeli forces demolished the Bedouin village of Al Araqib for the 70th time. The land the Bedouin village sits on was given to the Jewish National Fund (JNF) by the Israeli government, and the Bedouin were reclassified as "infiltrators" on lands they've registered as far back as the Ottoman Empire. In this second part in our series on Ethnocracy, a term coined by Israeli professor Oren Yiftachel to answer the question of whether Israel is a democracy, we look at who owns the land of the state of Israel and how it came to be so. The Real News' Lia Tarachansky also speaks to attorney Suhad Bishara and historian Noga Kadmon. 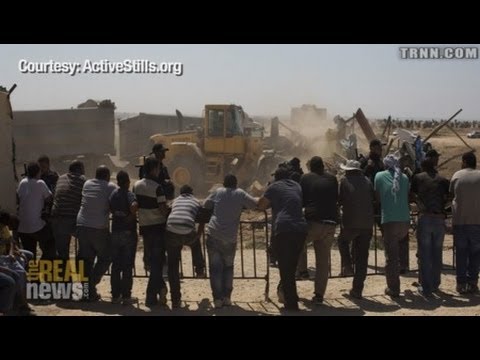 LIA TARACHANSKY, TRNN PRODUCER: On Thursday, June 12, Amir Levi, the budget chief of the Israeli Ministry of Finance, reignited a decades-long controversy when he said that the government must impose transparency on the Jewish National Fund, or JNF, a private company holding 13 percent of the lands of the state of Israel. According to the financial daily The Marker, speaking at a panel Levi said,

“The land is administered by the Israel Land Authority, but the JNF doesn’t pay taxes on it and the public doesn’t receive a thing in return for the land that it owns.”

According to Ha’aretz, the comment sparked an angry response from JNF officials, who said that

“The budget division director [Levi] is still new to the job, and that’s the only rational explanation for the lack of mastery of the material that he is demonstrating, [sic] JNF land is far from being a government resource. Rather, it is land owned by the Jewish people.”

The Jewish National Fund was formed over a century ago for the purpose of purchasing land in what was then Ottoman-ruled Palestine. By the time Israel was established, the company owned less than 6 percent of the land. Shortly after, in the 1948 war that created the state and led to the mass dispossession of nearly a million Palestinians, the government awarded the JNF another 2 million square kilometers.

Noga Kadmon is an Israeli historian who’s studied this period.

NOGA KADMON, ISRAELI HISTORIAN AND AUTHOR (SUBTITLED TRANSL.): The JNF was founded many years ago, before the state was created, and it has played a role in keeping the [destroyed] villages from Israelis’ awareness. JNF officials supported and helped convince the government to destroy villages to erase their remains, and continued with the JNF’s practice of planting groves on the village ruins to hide their remains. That’s their historical role.

But today their main role is developing vacation sites and parks on the groves it planted, and these places are on the lands of dozens of villages that in most cases the JNF chooses not to give information about to the tourists visit there. It was even said explicitly by one of the top officials in the JNF that there was an intention to conceal the remains.

TARACHANSKY: This land, on which dozens of demolished Palestinian villages stood, the JNF holds for the benefit of the Jewish people at large. As Nimrod Bousso wrote in The Marker on Sunday,

“What does it mean when ‘The Jewish nation’ is defined as the benefactor of a company? And not just any company, but one which today (…) holds a liquid capital of 4 billion shekels ($1.2 Billion) and 2.5 million square kilometers whose potential value is dozens of billions more?”

The JNF has recently been the center of heavy criticism for its practice of discriminating between Jewish and non-Jewish citizens in the way that it allocates land. Suhad Bishara is an attorney and the lands division director for Adalah, a legal organization that works with the Arab minority in Israel.

Now, you have different types of segregation and you have different tools that’s used to exclude the Arab-Palestinian citizens of the state from purchasing lands for residential use. One is land a land owned by the Jewish National Fund, which comprises about the 13 percent. The ILA administers the lands owned by the JNF according to the memorandum of the JF, which means only for Jewish people. Now, in 2004, we petitioned against this policy, and the petition since then has been pending before the Supreme Court, and it’s not–we don’t foresee when the Supreme Court would issue its decision.

TARACHANSKY: Since the creation of Israel as a homeland for the Jewish people, the debate of whether it’s a democracy has been waged by many who criticize its tiered system of rights for Jewish and non-Jewish citizens.

Professor Oren Yiftachel of the Ben-Gurion University proposed another way of looking at the kind of state Israel is: an ethnocracy. In the first part of this story, we looked at the new law proposal brought forward by Israeli Prime Minister Benjamin Netanyahu, which will further entrench Jewish exclusivity in Israel and define the state itself as belonging to the Jewish nation at large.

INTERVIEWER: What are the characteristics of an ethnocratic state?

PROF. OREN YIFTACHEL, BEN-GURION UNIVERSITY IN THE NEGEV: The main characteristic is the distribution of resources and power is governed by ethnicity, not by citizenship. Citizenship is an envelope which is quite often hollow. And there is a constant project of the state to create boundaries between majority and minorities, so the minorities will not influence the core of decision-making and the character of the state.

TARACHANSKY: One of the main ways in which an ethnocracy maintains the control of resources in the hands of the ruling group is through the control of land. In this second part, we ask who owns the land of the state of Israel.

YIFTACHEL: And, of course, the assumption is unspoken assumption that state land belongs to the dominant ethnic group. And this is why the ethnocratic state is so keen to nationalize land.

TARACHANSKY: In 2009, the Israeli prime minister proposed a land reform that allowed for the first time since the creation of the state the privatization of state lands. This opened the door to the sale of refugee lands previously held steward by the Israeli Lands Administration.

YIFTACHEL: –from 6 percent of Jewish land, and you can add to it the British Mandate land and other, perhaps, public [incompr.] can get to 10 percent. Now Jewish and Israeli land amounts to 96 percent, that is, 93 percent state or public land and three more percent Jewish private land. This is huge, profound Judaization of the land.

TARACHANSKY: In order to secure that the land that Palestinian refugees who fled and were expelled in the 1948 war remains in the hands of the state, Israeli state lawyers used a complex legal argument, using British and Ottoman Empire law.

YIFTACHEL: The most important part of it is making the law, massaging the law, manipulating the law in a way that the state will declare that all it’s doing is legal. And they came up with this idea of mewats, dead land, which was land that was uncultivated, unpossessed, distant, and neglected. And they specified that it’s more than half an hour walk or more than a mile and a half from the last place of residence of a town or a village. And the idea was to encourage people: if you went and cultivated mewat land, it became yours.

TARACHANSKY: Today, the Bedouin in the Negev desert are the group at the forefront of the struggle for equality and land ownership in Israel. While many of their lands were registered with the Ottoman Empire, Israel refuses to recognize their right to their land and instead refers to them as infiltrators.

On Saturday, June 14, Israeli authorities demolished the Bedouin village Al-Araqeeb for the 70th time. The village sits on lands allocated to the JNF, and its residents were violently removed from their tents by dozens of riot police while their makeshift mosque and water tanks were demolished. Surrounded and forced onto the last remaining structure of the village, the cemetery, they were showered with tear gas.

YIFTACHEL: So in the Ottoman law, they said the land–uncultivated land, as I said, has all these steps, and never does it say that it becomes state land. But Israel took this and took another order from 1933, and they married the two. And they come in the 1970s and say, these two allow Israel to declare all uncultivated land as state land. And the courts accepted it because there was no opposition. Both the Bedouins and the Palestinians didn’t have any expertise. It’s only now that, because of our research and some other people’s research, that we challenge it seriously. And it’s going to come to the Supreme Court very soon. But overall, over the years, you can see how the legal system becomes ethnocratic.