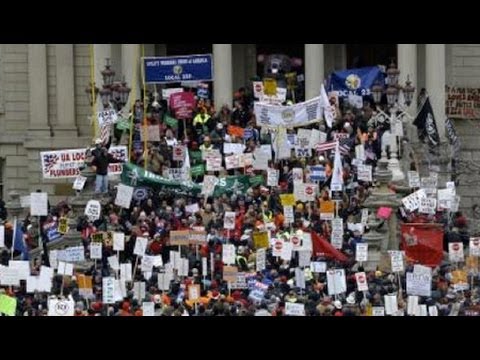 In Michigan, pro-business elements call this right to free association. Unions call it a way to break unions altogether in the state of Michigan. This will affect private- and public-sector unions.

Now joining us to talk about this legislation and the whole state of the union movement in Michigan and the United States is Jane McAlevey. She’s been an organizer in the labor and environmental justice movements for the last 20 years. She’s a PhD candidate at CUNY Graduate Center, lives in San Francisco Bay area. And her most recent book is Raising Expectations (and Raising Hell): My Decade Fighting for the Labor Movement. And she joins us from San Francisco. Thanks for joining us, Jane.

JAY: So to be able to pass such legislation in Michigan, which should be, you know, the state that’s almost the home of modern trade unionism, modern industrial trade unionism, is really remarkable. And without getting into kind of too much of the detail, what’s happening in Michigan, although we can talk a bit about that, but it’sâ€”I’m kind of more interested in the state of the union movement, that the unions in Michigan and elsewhere, many states where similar legislation is being passed, that unions are so weak, they’re not able to resist this. How do you account for that?

MCALEVEY: You know, I think there are so many overlapping reasons, but let’s just start by saying it’s not by accident that the labor movement in America is as weak as it is. It’s by very deliberate design on the part of some very powerful business interests in this country who have now gone global.

ACTOR (POLITICIAN), ADVERTISEMENT, CENTER FOR UNION FACTS: The American people are tired of the status quo.

ACTOR (UNION MEMBER 1), ADVERTISEMENT, CENTER FOR UNION FACTS: Who are you going to vote for?

UNION MEMBER 1: You know, your money got him elected last time.

UNION MEMBER 2: I didn’t give that guy a dime.

UNION MEMBER 1: Yeah, you did. Our union gave him a big chunk of your dues money.

NARRATOR, ADVERTISEMENT, CENTER FOR UNION FACTS: Union bosses are hijacking millions of dollars from their members’ dues to support their political friendsâ€”reason number four for the Employee Rights Act.

MCALEVEY: So what’s happening in Michigan in terms of the attack on the right to have a strong union, which is really the kind of laws that they’re going after right now, is reflective of what’s going on across the country. Right? So we saw the attack again in Wisconsin on the public sector unions. Wisconsin was, by the way, the first state in the country to give public-sector workers the right to collectively bargain. So the fact that they went after public-sector workers in the home of public-sector bargaining again shows us sort of the weakness with which the business interests are looking at the labor movement. So Grover Norquist, I want to just [crosstalk]

JAY: Before you get there, let’s justâ€”very quickly let’s just be clear what they’re trying to pass in Michigan. So if I understand it correctly, the way it exists now, if you get a job at a unionized place of work, you have to join the union, or at the very least you have to pay what amounts to dues even if you don’t join the union. So the union has some financial base in the plant, and they’re going toâ€”and the legislation would undo that. Is that correct?

MCALEVEY: That’s correct. And, in fact, I haven’t seen the details, but it could be more, because there are often side issues that have to do with the rights to arbitration. There can be other issues tucked into right-to-work legislation. But the fundamental issue is what you just laid out.

So the attack on unions and on the basic self-taxation system, its self-assessment by workers themselves, should be seen as nothing more than an attack that’s gutting the financial resources of the last and most powerful element of the progressive movement in America, that actually helps finance electoral challenges against very large business interests, who, by the way, don’t want to just eradicate unions; they want to eradicate all regulations of any kind of corporations in this country, whether it’s environmental laws, whether it’sâ€”it might regulate health care issues in the workplace. So the package of things that they’re going after we need to look at comprehensively.

And, unfortunately, I think part of the problem is that American labor leaders right now see the attack on unions as only it’s an attack on unions and not as the broader assault that’s been going on in this country for a couple of decades against the whole idea of regulation.

JAY: Now, how do you account for howâ€”the extent to which the American working class, which is mostly nonunionizedâ€”as we know, the numbers now in the private sector, about less than 7Â percent are unionized; if you include the public sector, something under 12Â percent. There’s a tremendous feeling amongst nonunionized members against unions, that all they do is take your dues and such, a lot of antiunion feeling, when the data actually doesn’t support that. I mean, I think almost every comparison between a unionized worker and nonunionized worker shows the unionized workers are doing better. But that’s not the sense that nonunionized members to a large extent have.

MCALEVEY: Yeah. So several issues there. One is: in this country, in America, every day, with the exception of places like your news venue, what Americans are fed is generally Fox News and then something called the business page in every local newspaper and every major newspaper where we still have newspapers, right? We’re not reading a labor page in American news; we’re reading what’s called the business page.

And there has been a constructed attack for at least the last 30 years to sort of shift and challenge the image of unions. So in the business section, what American workers who are nonunionâ€”because most workers, what they pick up in the paper and read every day, you know, it’s mobs, corruption, etc., etc., etc. Interestingly, we don’t read about corruption as the headline news for American corporations every day, even though there’s plenty of it all the time. Right? So there’s a constructed media image about what unions are.

And part of the dilemma is that unions have been a little bit responsible by some of the actions of the leaders for many decades now. Unions do bear some responsibility. But the most amount of responsibility is really to be found in people like Grover Norquist, Karl Rove, and some brilliant people who operate in this country who want to make it so that what American workers hear about unions is something really horrible.

So one way that Americans who labor would learn more and begin to appreciate the labor movement more as something that could be the most important organization in their life, as opposed to one that they’re skeptical of, is if the labor leadership in this country shifted gears and began to understand that, broadly speaking, taking up the issues of labor and class is the way that American labor is going to re-win over the hearts and minds of the working class in America.

JAY: But instead of that what you see is, on the wholeâ€”when I keep talking about labor leaders here, I should say, you know, keep saying there are exceptions to this. But the majority of the national labor unions, they put all their money into the Democratic Party. You know, whether it’s the midterms or presidential elections, most of their efforts there, they don’t put their money into defending unionism, they don’t put nearly as much money into organizing, they don’t in terms of even buying television advertising. I can’t remember the last time I saw a TV ad that said, buy union and here’s why. In terms of seeing the union movement as an independent force independent of the Democratic Party and kind of building its base based on that, there seems to be very little of that, again, with some unions, with some exceptions.

JAY: Thanks for joining us, Jane.

MCALEVEY: My pleasure. Thank you.

JAY: And thank you for joining us on The Real News Network. Don’t forget we’re in our year-end fundraising campaign. We have a matching grant. So when you give a dollar, it gets matchedâ€”we get another dollar. So the Donate button is over here somewhere. If you click on it, we can keep doing this.

Jane McAlevey is a Ph.D. candidate in Sociology at the CUNY Graduate Center. Before academia, she worked for 20 years an organizer in the labor and environmental justice movements. She is a regular contributor to The Nation magazine, which chose her book, “Raising Expectations and Raising Hell” (Verso 2012), as the “most valuable book of…