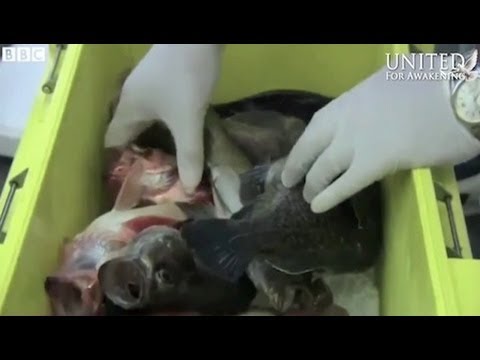 There’s been a lot of talk on the internet about Japan’s electric company, TEPCO, dumping radioactive water in the Pacific Ocean after the Fukushima nuclear disaster. So we here at The Real News wanted to know if there are real dangers to this activity, especially in light of the fact that highly radioactive water from the site has been seeping into the groundwater and the harbor off the plant.

With us to discuss whether this should be of real concern is our guest, Joseph Mangano. He is a health researcher and an expert on hazards of nuclear weapons and reactors. He is also the lead author in a recently published article in the peer-reviewed journal Open Journal of Pediatrics. It’s titled “Fukushima Fallout: Damage to the Thyroids of California Babies”.

Thanks for joining us, Joe.

JOSEPH MANGANO, EXEC. DIR., RADIATION AND PUBLIC HEALTH PROJECT: Oh, thanks for having me.

DESVARIEUX: So, Joe, just right off the bat, what are you claiming to have found in your study?

MANGANO: Well, we know that the meltdown, the radiation from the meltdown in Japan is coming to the United States in two ways. First of all, in 2011, when it occurred, these 100-plus radioactive chemicals got into the air and went straight around the world, went completely around the northern hemisphere, including over the United States. And it got into our environment through precipitation, into the drinking water, into the pastures where cows graze [incompr.] milk and so on.

The second way it got into our diet and our bodies is still going on now. Since 2011, the Japanese have not been able to control the meltdown and are releasing these radioactive chemicals into the Pacific Ocean, and they have steadily been moving from west to east, hitting the–and are about to hit the West Coast.

DESVARIEUX: Okay. So in your study, you talk about hypothyroidism happening in children. Can you elaborate?

MANGANO: Right. Well, not only do we know that the radiation has come here and that the greatest amounts were on the West Coast, but we also know in general that the people that are most susceptible to radiation exposure are the very young–the fetus, the infant, and the young child. A dose to an adult would not nearly be as harmful as the same dose to a fetus or a newborn.

DESVARIEUX: Okay. I know there are going to be some skeptics that are going to say, how can you really make that direct correlation just because you’re seeing this effect. How do you know it’s really caused by the Fukushima nuclear disaster? Can you just speak to what are the other causes of hypothyroidism? And how did you rule them out in your study?

MANGANO: There are very few other known causes of hypothyroidism other than exposure to radioactive iodine, and the same thing for the thyroid cancer as well, which iodine also raises the risk of, things like diet, you know, not enough iodine, nonradioactive, in the diet. But that doesn’t occur in the U.S. It’s mostly in Third World countries. Other things, like whether it runs in one’s family and so on. As far as a real reason–oh, and history of hypo–of a thyroid disease, which doesn’t occur in newborns. They’re newborn. Really, this is it.

So we’re not saying that is no other reason that’s causing this, but we have strong reason to believe that that’s radiation from Fukushima that affected these little fetuses is a major cause, is most likely a major cause of this. And to prove it, we want to follow up and look at other conditions of the infants–other birth defects, infant deaths, low-weight births, premature births, things of that nature.

DESVARIEUX: Are there similar studies being conducted in Japan? Can you refer to that? Because I’m assuming if we’re seeing this happening in California, I mean, it should be astounding in Japan.

MANGANO: That’s a good question, because really the doses in Japan are hundreds, thousands of times higher than they were on the West Coast. Unfortunately, there have really been no studies in Japan except for one, and that is one that’s being done by the Fukushima Medical University. They haven’t looked at hypothyroidism, but what they’ve done is this: they have taken 200,000 children under age 18 who live relatively close to Fukushima, and they tested for two things. The first they tested for was thyroid cancer. And they have found up to 59 children have thyroid cancer. In a normal population, it’s very rare in children. In a normal–we would expect one or two. They have 59.

Second thing that they found is they through ultrasound look at the child’s thyroid gland for precancerous lumps, you know, what they call cysts and nodules. And so far, 56 percent of children near Fukushima do in fact have a precancerous cyst or a nodule. And every year it gets higher–two years ago, 35 percent, last year 45 percent, this year 56 percent. Pretty soon we’re going to find that almost every child in the area has a precancerous growth on their thyroid gland. And that is–to me that is a powerful statement about how dangerous this meltdown has been.

DESVARIEUX: But let’s be honest. The government and the officials that are actually taking care of this cleanup haven’t emphasized this danger. And I want to look at the official line being put out there by the TEPCO cleanup boss, chairman of the Fukushima monitoring committee, Dale Klein. He was interviewed by Australian Broadcasting Corporation, and he had this to say. Let’s take a listen.

DALE KLEIN, CHAIRMAN, NUCLEAR REFORM MONITORING COMMITTEE: At the end of the day, when the water is discharged, it will be released in a way when it is diluted so there is no risk to the public health and safety. But it is an emotional issue.

DESVARIEUX: So, Joe, what’s your response to that?

MANGANO: The statement is half right. Yes, of course the radiation gets diluted. It’s most intense closest to Fukushima when it goes into the Pacific Ocean. And as it goes, you know, miles and miles, it gets more diluted.

However, it does not mean that that radiation does not pose a health risk. All radiation poses a health risk, even at relatively low doses. And that’s what we believe is happening in the West Coast right now, because it keeps coming and coming.

The other thing is that all these statements about the radiation is harmless is premature because the reactors are still not under control. They are still leaking. They are still spewing out these terrible poisons. Even a meltdown like Chernobyl in 1986, which again went around–like Fukushima, went around the globe and caused many, many people to become sick and die, it was over after a few weeks. They were able to dump dirt and sand and salt on the reactor and put a sarcophagus over it.

Fukushima is still giving out radiation. It’s still not under control. And that’s almost three years later. And that–so any statement on health, especially that it doesn’t pose risk, is very premature and really a disappointment that any official would say that.

DESVARIEUX: And three years later, you know, people are still taking this seriously on this side of the Pacific Ocean. In San Francisco, the San Francisco city council voted in December to test the water for radioactive levels. I guess at the end of the day, if someone’s watching this, they’re going to ask themselves: should I be concerned? Should I be concerned about the fish that I consume that might be coming from that area, or even local fish that is going to be coming from the Pacific Ocean?

MANGANO: Well, I think evidence of that came last month, November 2013, by scientists at the University of Alaska at Fairbanks. They have been monitoring one of these many chemicals from Fukushima called cesium-137, and they’re finding higher levels in the waters in the Pacific Ocean in Alaska. And they estimate that in the end the levels are going to reach the same amounts as they were in the mid-1960s.

Now, in the mid-1960s, the United States and Soviet Union were exploding atomic bombs above the ground, hundreds of them, over 400 of them. And people were very, very frightened, not just about nuclear war, but about the fallout, to the point where both countries and the United Kingdom signed a treaty banning all above-ground tests. Everyone would agree that this was a threat to public health. President John F. Kennedy gave a speech talking about we need this treaty because our children’s health is at risk here. And here we are at the University of Alaska saying this is going to be the same thing. So I believe we should have similar concerns as 50 years ago.

DESVARIEUX: Alright. Joseph Mangano, thank you so much for joining us.

MANGANO: Oh, thanks for having me.

Joseph Mangano MPH MBA is a health researcher, and Executive Director of the Radiation and Public Health Project (RPHP). The group is the only one in the U.S. with a specific mission of producing research on health hazards of nuclear reactors and weapons. Among Mangano's accomplishments are 32 medical journal articles, 53 newspaper editorials, 3…