Jason Leopold: Guantanamo Prisoner's ongoing hunger-strike and detention of 158 prisoners, including some 80 who have been cleared for release or transfer has increased pressure to close Guantanamo

Jason Leopold: Guantanamo Prisoner's ongoing hunger-strike and detention of 158 prisoners, including some 80 who have been cleared for release or transfer has increased pressure to close Guantanamo 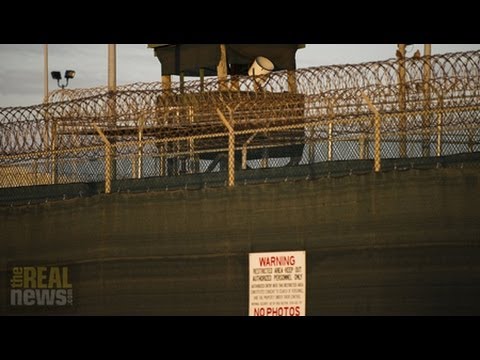 This January will mark the 12-year anniversary of the opening of Guantanamo Bay, where 158 detainees remain locked up, according to official figures. Some prisoners have been detained for over 11 years without charge or trial, and about 80 people remain imprisoned even though they’ve been cleared for release.

Earlier this year, 103 prisoners were reported to participate in hunger strikes and were eventually force-fed, an action condemned by the United Nations. Earlier this month, the first commander of the U.S. detention facility at Guantanamo Bay, Cuba, said, quote, the camp should have never been opened.

Now joining us to discuss this is Jason Leopold. He just returned from Guantanamo, where he reported on the conditions at the naval base. Jason is an investigative reporter, author of the memoir News Junkie and an ebook From Hopeful to Immigrant to FBI Informant: The Inside Story of the Other Abu Zubaidah.

Thank you so much for joining us, Jason.

JASON LEOPOLD, INVESTIGATIVE REPORTER: My pleasure. Thanks for having me on.

NOOR: So let’s start off by just getting the latest news from Guantanamo. You just returned from there.

LEOPOLD: I did. And basically what was happening at Guantanamo this time around, I was trying to get some idea of how this hunger strike–which is still ongoing, by the way–is affecting the operations at Guantanamo. And what recently happened is that the spokespeople for the prison, for Joint Task Force Guantanamo, they made a decision not to provide the media with any more hunger strike numbers. They will no longer tell us how many prisoners are on hunger strike.

And that’s a new policy that was handed down by SOUTHCOM, United States Southern Command, which has oversight of the joint task force that runs Guantanamo. And basically what they said here was that the prisoners succeeded in attracting media attention to the hunger strike, and they said that it was a self-perpetuating story.

So that’s sort of the latest news.

And, by the way, Guantanamo’s–was one of their taglines in their official sort of motto is transparency. So this is, you know, just another example of how–or how less-than-transparent they’ve been.

We’re finding out or I find found out when I was there that there are a number of prisoners who–as you noted, they’ve been there for more than a decade–they’re suffering medically. A surgeon had to be flown down to Guantanamo last week to perform cataract surgery on two prisoners. So they’re dealing with a number of medical issues and, you know, trying to essentially figure out how they’re going to empty out this prison.

NOOR: So in the introduction I mentioned that the founding commander of Guantanamo Bay, he said the camp should be closed. And as you’ve reported, the current commanders also called for the camp to be closed. Talk about why this camp is still open today.

LEOPOLD: Well, it’s essentially still open at this point because of politics. You know, as you noted, there have been–more than half of the prisoners out of there have been cleared for release or transfer, and politics has sort of interfered. It’s–also has not been a priority for the Obama administration. Guantanamo fell off of everyone’s radar.

You can credit the hunger strike that took place this year that attracted global headlines, was condemned by the United Nations and medical ethicists. The American Civil Liberties Union, the fact that, you know, this barbaric form of force-feeding that we saw was taking place, you know, it forced the administration, forced the president to mention the hunger strike during a major counterterrorism speech in May.

We started to see action from Congress. Senator Feinstein, Senator McCain went down there to observe the conditions.

So Guantanamo just was not a priority for the public, for Congress, or the president. And it was–you know, the whole goal of the hunger strike itself for the prisoners was to attract attention or raise awareness about their indefinite, you know, status, their indefinite detention.

So now we’re finally seeing some action. Within the past month there have been, I believe, five or six prisoners who have been repatriated to Algeria, Saudi Arabia, now Sudan. We have seen two very, very important positions in the State Department and at the Defense Department, these two envoy positions have been filled. Those were positions that were long vacant.

These parole board style hearings called periodic review boards that would look at the cases of the so-called indefinite prisoners–these are prisoners who are either too dangerous to release or the evidence against them was tainted by torture–they’re now taking a look at these few dozen or so that fall under that category. So we’re starting to see some action.

We’re also starting to see a bipartisan coalition of Congress essentially loosen some restrictions that have been in place that would allow the president to move forward and start releasing some of these prisoners. He did always have the authority–under the National Defense Authorization Act he could have issued a national security waiver. He chose not to.

But, you know, I believe that come 2014, Guantanamo is going to remain in the headlines.

NOOR: Now, you just mentioned the NDAA, which is up for reauthorization. The House passed a version. It’s due to be taken up by the Senate next week. How would the passage of this bill affect Guantanamo?

LEOPOLD: Well, it would essentially allow President Obama to, you know, start releasing some of these prisoners. In the past there were financial restrictions in place that would–Congress would not allow the transfer of any prisoners to Yemen, for example, and essentially not allow any money to be used to start emptying out the prison. And even though the president did have the authority under the National Defense Authorization Act, this national security waiver, he just chose not to use it.

So now, you know, you have Republicans and Democrats getting together and saying, okay, we’ll loosen up these restrictions.

There’s still a restriction in place, however, that would not allow the administration to bring any prisoners to the U.S., to hold them here. Nor will it even allow any prisoners to be brought to the U.S. for medical treatment. That’s actually an important issue, because the taxpayers are still funding these trips about every 60 to 90 days that physicians are taking to Guantanamo to treat these prisoners.

But now it does appear that, you know, with the word Afghanistan allegedly winding down–we’ll see what happens there–the authorization to use military force itself is sort of expiring. And it was under that authorization that the Bush administration and the Obama administration said that they could hold these prisoners.

NOOR: Jason Leopold, thank you so much for joining us.

LEOPOLD: My pleasure. Thank you.

Jason Leopold is an investigative reporter and contributor to Al Jazeera America covering Guantanamo, counterterrorism, national security, human rights, open government and civil liberties issues. He's been called a "FOIA Terrorist" by federal employees for his aggressive use of the Freedom of Information Act, which included suing the FBI and forcing the agency to changes…