What companies are profiting off of prisoners and mass incarceration?

What companies are profiting off of prisoners and mass incarceration? 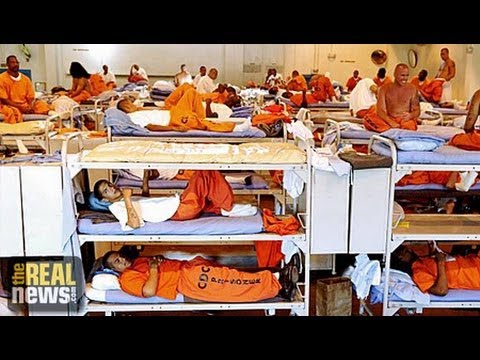 We’re continuing our conversation with Jesse Lava. He’s the campaign director of Brave New Films, where he runs the Beyond Bars campaign against mass incarceration. He’s behind a new campaign called Prison Profiteers (that’s at PrisonProfiteers.org), which exposes some of the corporations and industries that are profiting from mass incarceration.

So, Jesse, can we really get into it now? Can you just name some names and tell us exactly who is behind and who is profiting from mass incarceration?

One thing to keep in mind is that private prisons are a burgeoning industry in the United States. They now have about 10 percent of the prisoners in the United States. And they have long records of abuse and neglect at their facilities, because, of course, it’s much cheaper to not invest in the care of your prisoners. The less you invest in your prisoners, the less you care about their well-being, the higher your profits.

So CCA, Corrections Corporation of America, is one particularly egregious private prison company. The GEO Group is another egregious private prison company. And coming up this week we have a video being released about the GEO Group and some of the [inaud.] facilities that were not taken care of in the way that you’d expect from any kind of facility that purports to be housing human beings.

But let’s go a little bit deeper than private prisons, ’cause a lot of people have heard of private prisons and they get the idea that somehow locking people up for profit is wrong. But prison profiteering goes far beyond that. Let’s look at Global Tel*Link, which is a private company [inaud.] phone services to prisons. And it’s not just the private prisons. They provide it to all kinds of prisons in the United States. They charge up to $17 for a 15 minute phone call.

So imagine that you’re a six-year-old boy and that your dad is in prison and that you want to talk to him. Your mom is going to have to shell out up to $17 for a 15 minute call just for you to talk [inaud.] Now, remember, this is a family where the dad isn’t the breadwinner anymore and he’s not paying child support, so there’s probably a single mom trying to make it on her own. How often can they actually afford to let this kid be in touch with their dad? It’s something that Global Tel*Link takes advantage of because it can. It knows people want to make these calls, so it jacks up the prices as far as it can.

So let’s look at another company, Corizon. Corizon provides medical services to prisoners across the country. They’re responsible for treating prisoners who have medical conditions. But the word treating should really be taken loosely, because the way this company makes a profit is by not treating patients. When patients have a medical condition, what’s going to make them more money? Actually treating the condition and paying a nurse and a doctor and the test makers and everything else in order to make that treatment happen? Or could they just withhold treatment, say you’re fine, and then make the same money that they were going to make anyway when they get their contracts from the state? So Corizon is another company that we should look at as a prison profiteer.

We should also think about the bail industry. Bail is something that’s not very well understood. So consider this for a sec. Normally the way bail is supposed to work is that you give the court a bunch of money, you get let out of jail, and then when you come back to court, they give you the money back. It’s basically to make sure that you show up on your court date, ’cause if you don’t show up, you don’t get your money back.

But what really happens is the only people who are able to put up bail in that way are rich folks, ’cause often bail is $80,000, $100,000, $400,000. Who has that lying around besides Mel Gibson and Lindsay Lohan? If you’re one of the other 99 percent of people in the country who don’t have that kind of money lying around, you have to call a bail bondsman, and he puts up the money for you. But in exchange he takes 10 percent. So if it was a $50,000 bail, you’re giving him $5,000 whether you are found guilty or innocent. The average bail amount is $90,000 or so, which means you’re paying a bail bondsman $9,000. So it’s not a system that’s fair to the vast majority of the public. Only people like Mel Gibson and Lindsay Lohan get a good deal out of it.

NOOR: Can you talk about lock-up quotas?

LAVA: Yes. Lockup quotas are something that private prisons do to ensure that they get money coming in regardless of whether there is a lot of crime. So what they do is they have states sign a contract with them that says, we are going to keep your private prison 90 percent full, in some cases 100 percent full, no matter what. So it’s basically encouraging high crime. It says, we don’t really get any financial advantage from lowering crime. Now, if they don’t fill the beds, it means taxpayers are on the hook for paying for those beds anyway. It’s basically a tax that’s imposed on anybody that has managed to fight crime successfully. So these quotas are a perfect example of what’s wrong with having prison profiteering, having prisons for profit.

NOOR: And can you talk about the lobbying influence of these corporations that are making money, as well as–on The Real News we’ve discussed the role of prison and police guard unions as well.

LAVA: Yeah. So let’s look at police. The Fraternal Order of Police is one example, or the National Narcotic Officers’ Associations’ Coalition. These are examples of organizations that lobby on behalf of of DEA agents, police officers, etc., to make sure that mass incarceration and the war on drugs stay in their current state of sort of peak capacity right now. And they want to make sure of that, so that their members get higher salaries, get overtime pay, etc. And I think they probably genuinely believe that it works. But then again, they think it works because it’s in their interest to think that it works.

So think about a politician. Think about what they’re thinking about at election time. They want the support of police officers. And what would happen if they were going into an election and police officers, DEA agents decided, we don’t like you as a candidate? That would be incredibly damaging. You don’t want to be going up against police officers when you’re a candidate. It’s much better to stand in front of a bunch of clapping police officers and show the world how tough you are. So that’s often what happens. And as a result, it’s very politically difficult to change our policies on mass incarceration.

NOOR: Finally, Jesse, can you talk a little bit more about what we can expect from your campaign in the future, in the upcoming days and weeks?

LAVA: Yes, absolutely. Prison Profiteers is about to release several more videos, one on the GEO Group, one on CCA, and one on law enforcement. So that’s going to be coming up soon.

But one thing to keep in mind is that Prison Profiteers, which you can find at PrisonProfiteers.org, is just one example of what Beyond Bars, my broader campaign, does. So you can go to BeyondBars.org and see a variety of videos and social media campaigns that are all geared toward fighting mass incarceration.

Something we’re going to be doing coming up involves how prosecutors have tended to let Wall Street off the hook while giving low-level drug offenders massive sentences. And it’s not proportionality, and that’s not what a criminal justice system should look like. It’s anything but just. So Beyond Bars is going to be doing more on that in the months ahead.

NOOR: Thank you so much for joining us, Jesse.

LAVA: Sure. Thanks for having me.

Jesse Lava's career is about transforming hearts and minds to promote social justice. He now runs Brave New Foundation's Beyond Bars campaign, which produces videos and engages social media to fight mass incarceration in the United States. Previously, Jesse has done communications for progressive groups, worked to reclaim the national values debate from the religious…

Retired FBI Agent: Russia Sanctions Moves the US Closer to Another Cold War

24 Arrested Outside Hofstra University While Demanding An Open Presidential Debate

Clinton vs. Trump Debate: Is One Section of the Oligarchy More Dangerous?