New campaign exposes the companies that profit off prisoners

The report mentions Corrections Corporation of America and the GEO Group as private prison companies who profit from mass incarceration.

Jesse Lava, campaign director of Brave New Films where he runs the Beyond Bars campaign against mass incarceration, says that it’s not just private prison companies who profit.

Global Tel*Link, who provide phone services between inmates and families, "charge up to $17 for a 15 minute phone call,” said Lava.

Lava also that incarceration costs taxpayers about $74 billion a year, according to data from 2007.

“If you count however, courts and cops, which of course are part of the incarceration system, taxpayers are paying $228 billion a year. So this is an absolutely massive system that taxpayers are on the hook for,” says Lava.

New campaign exposes the companies that profit off prisoners

The report mentions Corrections Corporation of America and the GEO Group as private prison companies who profit from mass incarceration.

Jesse Lava, campaign director of Brave New Films where he runs the Beyond Bars campaign against mass incarceration, says that it’s not just private prison companies who profit.

Global Tel*Link, who provide phone services between inmates and families, "charge up to $17 for a 15 minute phone call,” said Lava.

Lava also that incarceration costs taxpayers about $74 billion a year, according to data from 2007.

“If you count however, courts and cops, which of course are part of the incarceration system, taxpayers are paying $228 billion a year. So this is an absolutely massive system that taxpayers are on the hook for,” says Lava. 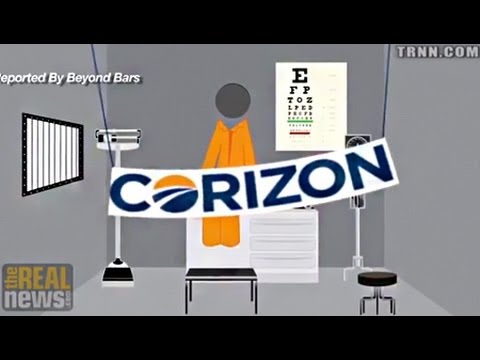 A new campaign has been launched called Prison Profiteers that exposes the corporations that profit from the nation’s incarceration system, including medical companies, bail companies, phone companies, and even police departments.

Now joining us to discuss this is Jesse Lava. He’s the campaign director at Brave New Films, where he runs the Beyond Bars campaign, which launched this new project.

Thank you so much for joining us, Jesse.

JESSE LAVA, CAMPAIGN DIRECTOR, BEYOND BARS: Happy to be here. Thanks for having me.

NOOR: So, Beyond Bars is releasing six videos that reveal different aspects of the industries that profit off mass incarceration. Tell us a little bit about this campaign and what the goal of the campaign is.

LAVA: Well, the first thing to do is to put the campaign in context. The United States is the prison capital of the world. We have the highest rate of incarceration in the world and the highest number of people the world, so a higher rate than Rwanda and Cuba and a higher number than China, Russia, and anybody else. About half of the people in prison in the United States are there for nonviolent offenses.

So the question is: how did it get this way, and why is it staying this way? Why have we become the prison capital of the world, and why aren’t people crying out to figure out is there a better way to do public safety in the United States if this is the result, that we have more prisoners than anywhere else?

One of the key problems is profit. We have a lot of people, a lot of corporations–they’re a small slice of the population, but there are a lot of interests in Washington and in state capitals across the country that profit off of mass incarceration that want the system to stay that way.

So what we wanted to do with Prison Profiteers, which is a project that we undertook with the ACLU and The Nation magazine, is to reveal just how the system is working, reveal what people don’t know about how profit is happening from our prison system, and show just how vast the system is. It’s something that really is under-talked about in the mainstream media.

So when we have the criminal justice system that isn’t working, that isn’t rehabilitating people, that isn’t preventing crime, and is instead stowing people away for decades on end, that’s a problem taxpayers pay for.

Now, when it comes to profiteering, prisoners and their families also pay a heavy price. So, for instance, if you have a phone company that is exploiting the people behind bars and exploiting their families who desperately just want to talk to each other on the phone, they charge outrageous rates. Those charges, those prices get picked up by the families. So that’s not good for–that’s not a pro-family policy, and it’s not good for taxpayers, either, in the long run, when we have this policy of mass incarceration.

NOOR: And it’s been well established, the racial makeup of the majority of the people that are behind bars in this country.

LAVA: Yeah. So a majority are African-American or Latino, 60 percent or so. And we need to do a lot to achieve racial equality.

However, there’s a couple of ways to do that. Some people might say, oh, let’s achieve racial inequality by arresting more white people for drugs, because after all, whites, blacks, Latinos all use and sell drugs at about the same rates, yet blacks are incarcerated about ten times the rate of whites. So some people might say, well, let’s just incarcerate whites more.

The problem is that our system isn’t working. Obviously, if we have more people in prison than any country in the world and we’re spending such exorbitant sums, maybe there’s a better way to achieve public safety. Maybe there’s a better way to cure drug addiction or to resolve people’s problems that lead to crime in the first place. We’re not doing it the right way. That applies to whites, blacks, and Latinos. But yes, as of right now, blacks pay the heaviest price in the system, and Latinos up next.

NOOR: And can you describe this current moment? Within the past few years some would point perhaps to Michelle Alexander’s book The New Jim Crow, the execution of Troy Davis, and a host of other high-profile cases that have–you’ve kind of–witnessing a growing movement against mass incarceration in this country.

LAVA: Absolutely. Michelle Alexander’s book, The New Jim Crow, was a seminal piece of work that really helped change the conversation in this country about mass incarceration, and helping people see it as a problem of the time and not just something that liberals can just kind of nod gravely about and say, oh, yeah, I know, isn’t that unfair. It truly is one of the most staggering problems of our time that has to be contended with if we care at all about human rights, and even if we care about cost-effectiveness and public safety. Michelle’s book has done a great number number of things on that front.

My project is paid for by a foundation, by the Ford Foundation, and Beyond Bars’s. The Soros foundation Open Society has been funding a lot of things that are doing good work on criminal justice reform. And recently, Eric Holder, the attorney general, went up on public television–excuse me–he went up on television to a national audience and told people that he wants to make ending mass incarceration a priority in his administration as attorney general. That was unthinkable ten years ago. It was always tough on crime, tough on crime, tough on crime. That was how you won votes. That’s how you achieved political success. The idea of being smart on crime, of being humane on crime, that simply didn’t factor in. And now it is factoring in. And so that gives us the best opportunity we’ve probably had in decades to hack away at this system of mass incarceration.

NOOR: This concludes part one of our conversation. Thank you so much for being with us.

LAVA: Sure. Thanks for having me.

NOOR: We’re going to continue this conversation in part two and really take a look at some of the companies and some of the industries that are profiting off mass incarceration.

Jesse Lava's career is about transforming hearts and minds to promote social justice. He now runs Brave New Foundation's Beyond Bars campaign, which produces videos and engages social media to fight mass incarceration in the United States. Previously, Jesse has done communications for progressive groups, worked to reclaim the national values debate from the religious…

January 10, 2020
Sign Up for Our Newsletter
Help Us Make Real News!