Joining us from Haiti, CUNY's Francois Pierre-Louis and CEPR's Jake Johnston discuss why average Haitians are disillusioned with the electoral process and the international forces invested in its results

Joining us from Haiti, CUNY's Francois Pierre-Louis and CEPR's Jake Johnston discuss why average Haitians are disillusioned with the electoral process and the international forces invested in its results 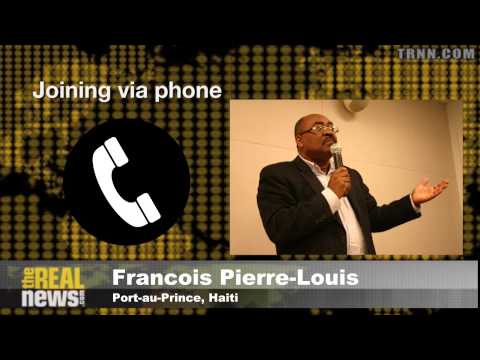 On Sunday, Haitians voted for the first time in four years in legislative elections. So think of this as the equivalent of U.S. Congressional elections. But Haiti’s parliament has not been in session since January after scheduled legislative elections in 2011 and 2014 were canceled, thereby leaving Haiti’s President Michel Martelly essentially ruling by decree.

Now joining us from Haiti’s capital Port-au-Prince to give us the perspective on the ground is Jake Johnston. He is a research associate at the Center for Economic and Policy Research, and he’s the lead blogger for Haiti Relief and Reconstruction Watch. Also joining us via phone from Haiti is Francois Pierre Louis. Francois is an associate professor of political science at Queens College in New York.

JAKE JOHNSTON, RESEARCH ASSOCIATE, CEPR: Thanks for having us.

DESVARIEUX: So Jake, I’m going to start off with you.

DESVARIEUX: Pleasure. So Jake, I want to start out with you. You’re on the ground, you were going to different polling stations. Many international reports highlight the lower voter turnout and the violence around, at certain polling stations during these elections.

Did you share the same experiences? And if so, do we have a sense of who is behind these disturbances?

JOHNSTON: Yeah, sure. So again, I was in the capital. I went to probably between a dozen and 15 polling centers throughout the day. It was a mixed bag. At some of the smaller ones things seemed to be going relatively smoothly. There were the problems many expected beforehand, people not being able to find their names on voter lists, material showing up late in some cases, polling stations opening up late. Problems with the ink, voting twice.

I think what the biggest issue was across the board was this issue with political party observers. It was announced just the day before the election that there would only be four allowed per voting booth and this caused a lot of tension, certainly in the morning. And again, at some polling centers, certainly in the area of Cite Soleil, there was quite a bit of violence and entire voting centers including the largest, the two largest in Cite Soleil, were both closed. One of them was ransacked by armed men who had showed up and just sort of littered the entire place with ballots.

DESVARIEUX: Okay. And the reports also mentioned the low voter turnout. Francois, it’s been four years since there’s been an election. Many political parties were demanding that they take place. Why are we seeing such a low voter turnout?

LOUIS: Well, I think the first reason is that a lot of people didn’t believe the election would take place at all. And secondly, the [inaud.] had promised and the government [pledged] money to the political parties so they can mobilize their electorate. And that money did not come through.

The [inaud.] of the violence, and people were afraid to be out because there was a lot of rumors about the violence. And it did happen. And that was [inaud.] people outside of, in the way voting and not seeing any results in how the elections have changed their lives. We talk [inaud.] they vote. They were [inaud.] in the past many years [inaud.] been voting. So therefore I think they have decided to stay home.

And also seriously, the kind of candidates that were running were not really [inaud.] all of them were part of the regime. Some of them have criminal backgrounds. [Inaud.] running for office because they can find [immunity in the election]. So therefore people were not really excited about going to vote for criminals to pass them in the house, like they can build it up and [inaud.].

DESVARIEUX: So this is the first of three elections scheduled for 2015. and the one scheduled in October and the following in December, will choose the new president.

Francois, I’m going to ask you. Why did it take so long for us to even get these elections scheduled in the first place?

LOUIS: Well, I think there was a concerted effort on the part of the Martelly administration and also the international community to push for constitutional reform so that there would be fewer elections and fewer members in parliament. So they were playing on that side to cancel the election, postpone the election as much as possible.

The other reason also is that Martelly [inaud.] publicly that he wasn’t really [scared] that much about elections, and he really wanted to be [inaud.] in the palace and so [inaud.]. So therefore there was no real interest on the part of the government [debate]. And the international community also was not in a rush to push for regular elections.

DESVARIEUX: I’m glad you mentioned the international community, because we should also note that Haitian elections typically both have internal and external forces meddling in the result. One example is from one of your recent exposes, Jake. You found that the U.S. Agency for International Development, USAID, gave nearly $100,000 to a Haitian political movement with close ties to Michel Martelly after the country’s 2010 elections.

Tell us a bit more about what exactly you found, and what other evidence do you have of this sort of American government supporting the Martelly administration?

JOHNSTON: I think the story really starts with the first round election in November of 2010. Soon after the earthquake there was a cholera outbreak, it was an extremely difficult time to organize an election, and yet it was pushed forward. And in that election there was a lot of problems on election day. A lot of candidates had pledged to try and annul the vote entirely. Some of the leading candidates, including Martelly, were contacted by the international community and told they were leading the election. They sort of backed off their calls for it to be canceled.

And what we saw after that was actually a mission from the OAS, which is also observing this election, came into Haiti and without any sort of statistical basis essentially overturned the results of the election, which had prevented Martelly from going to the second round. That was led predominantly by the United States, as well as some of the other members of the international community, including the UN contingent that is in Haiti now.

What we found, or what I found through Freedom of Information Act requests, is that USAID through one of their big contractors, Chemonics, had actually provided some support and hand tools and things like that to a group called [movement tekale]. Now as you know, their current political party is the party [Hacienta Tekale]. Tekale is the sort of nickname of Martelly. And what that document showed was that this money came right after the election. And while they denied that it was political to me and said this was not a political group of documents that have come out actually past, after this article came out, directly showed the U.S. referring to the organization as being founded by Martelly campaign members.

I think as Francois was mentioning, part of the reason for this delay has been on the part of Martelly. I think he’s been emboldened by that support he got from the international community in 2010 and 2011. It’s allowed him some latitude to rule not as democratically, certainly, as many here would like to see.

DESVARIEUX: Now, the obvious question is why. Francois, why does the U.S. in particular support the Martelly administration?

LOUIS: Well, I think the U.S. government has a different agenda than what existed in Haiti. First, the U.S. government and the other members of the international community really wanted to restructure Haiti’s economic [problems] by looking at the environment, by looking at the other industries such as the industrial park in Karakol, [inaud.] reform, financial reform.

So [inaud.] they were hoping that the [inaud.] would get rid of the [inaud.] issues of the [develop movement]. They can use Martelly as a vendor to be able to do those [tensions]. So what really happened with that, Martelly was [inaud.] the developer. The longer they’re waiting hoping that Martelly might be a developer, the more problems they had. And at the end Martelly wanted to control the electoral council. The members of parliament did not want him to do that. So there was a clash between the members of parliament and Martelly, and the [inaud.] administration. [inaud.] its ambassador said clearly that she wanted only one election in Haiti and that was meant to be later, not sooner. So as a result, that’s why it took so long for elections to happen.

And in the end if you look at it, the U.S. failed to make any fundamental change with Martelly. The UN also failed to bring in any real change. In fact, since the UN has been in Haiti, this is one of the worst elections we’ve had. With [inaud.] the UN gets [to run] the election in a country because of the violence. We’ve never had that level of violence in the previous elections [inaud.] Haiti.

DESVARIEUX: Okay. And we don’t have the results, but they’re expected in about eight to ten days, I believe. Jake, what has been, just really quickly, the response of the international community? Are they saying that these election results are going to be honored?

JOHNSTON: Yeah, I mean, I think we’ve seen a real divergence between what I’ve certainly heard from my contacts throughout the country who are observing the election, as well as what I saw here in the capital, which is that these problems were widespread. And yet the international community, I actually just came from the OAS press conference where they announced their preliminary findings. And in short it was, it’s good enough. Good enough for who, right, good enough for Haitians? I don’t think many people here think it was good enough. And I think everyone’s sort of in wait and see mode to see when the results come out what they’ll look like, and that’s really going to be the determiner of what happens next.

DESVARIEUX: All right. Jake Johnston, as well as Francois Pierre Louis joining us from Haiti. Thank you both for joining us.

JOHNSTON: Thanks for having us.