Over a hundred people injured, and one child killed as police violence mars the fall of Mubarak two years ago. Protesters enraged over continued repression vow to stay in the streets.

Over a hundred people injured, and one child killed as police violence mars the fall of Mubarak two years ago. Protesters enraged over continued repression vow to stay in the streets. 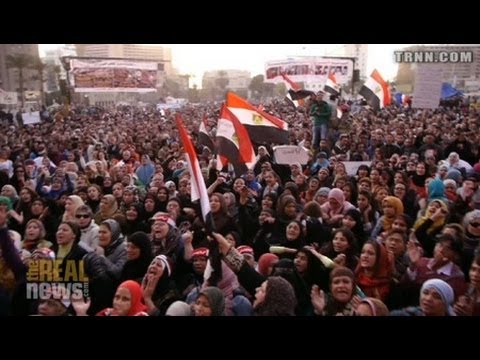 It was the day Egyptians celebrated the ousting of their former dictator. Two years after Mubarak was finally forced from office by an 18 day revolt, jubilation was replaced by anti-government anger.

Tens of thousands hit the streets on February 11th outraged against the continued oppression that initially sparked the revolution.

Throughout the day in Egypt’s capitol Cairo, dozens of marches headed toward Tahrir square. Although smaller in size compared to previous demonstrations, resentment thundered through streets.

Still demanding bread, freedom and social justice, protesters colored the marches with symbols of their oppression and struggle. Many condemned their government for selling out the reovlution to appease the demands of foreign powers.

On the legendary Mohammed Mahmoud street, Egypt’s rowdy youth returned to the location of their fiercest battles against state security forces. Their chants haven’t changed.

SOT – down with the interior ministry

What has changed is the latest target of their upheaval. At first they chanted against Mubarak, then the military council that followed him, and now their newly elected president Mohammed Morsi and his Muslim Brotherhood.

The reasons they despise Morsi are also the same as the reason they despised Mubarak and the Military generals, but for young people, the notorious state security forces, specifically the police, remain their main enemy.

SOT – we are going to Gika’s house

BRIDGE – this is the important Mohammed Mahmoud street holds.

There, Gika’s father addressed the masses outside their family home.

As some marches entered tahrir, others headed toward the presidential palace.

While protests raged in the streets, other forms of resistance were taking place behind closed doors.

SOT – the day of departure isâ€¦ the revolution was good because.. but also

At the palace, as expected, clashes erupted, when again young people tried to storm and burn down the presidential palace.

Their attempts again were met with police brutality as security forces unleashed endless rounds of tear gas into the defiant crowds.

bridge: This is a typical scene now, you can see people are really pissed off, they can gas them back but they keep returning

NATSOT – why don’t you come and face us like real men!!!

The chase between demonstrators and the police has become routine. Seemingly immune to the tear gas after two years of it, its common to see scenes like this:

some of the canisters land on this nearby school, lighting its courtyard on fire.

Although it seems like a game and has become their latest pastime, these protesters assert clashing with the police is resisting their violent order. Some are detained, beaten and dragged away.

in the backdrop of the chaos, the youth evoke the memory of their slain comrade

The names of the dead are often heard echoing over the clashes.

The most hardened fighters were mainly young, many of them concealed by their black masks, symbols of the anonymous and now infamous black bloc.

SOT – the black bloc is not an organization

The black bloc declare they are anti-media. our scheduled interviews with some of their members was ignored.

One of them finally speaks with us but not before he is pulled away by his comrade.

The back and forth goes on late into the night and eventually the crowds wear thin and a tense calm returns.