Recession and Austerity Good for the Rich

James Henry: The top 7 percent of households, about 8 million people, have seen their net worth increase to a mean of about $3.2 million in the last three years

James Henry: The top 7 percent of households, about 8 million people, have seen their net worth increase to a mean of about $3.2 million in the last three years 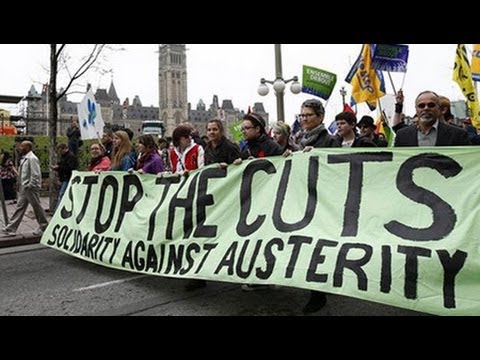 PAUL JAY, SENIOR EDITOR, TRNN: Welcome to The Real News Network. I’m Paul Jay in Baltimore. And welcome to another edition of The Henry Report with James Henry, who now joins us from New York City.

James is an investigative journalist, an economist, an attorney. He used to be chief economist at the international firm McKinsey & Company.

JAY: So Pew came out with a new research study you’ve had a look at. What do you make of it?

HENRY: Well, it’s consistent with what we know about wealth in the United States. The top 7 percent of households, about 8 million people, have seen their net worth increase to a mean of about $3.2 million in the last three years, during the—2009 to 2011, while the rest of us, you know, the bottom 111 million households, saw their net worth decline by about 4 percent to less than $150,000. And there’s many people who have no net worth at all, and indeed are in debt in this period.

This study is interesting, but it’s a little bit incomplete, because it doesn’t pick up the last two years. It stops in 2011. And if anything, things have gotten worse, ’cause what’s really driving this differential is the fact that most ordinary Americans don’t own stocks. Their main source of wealth, if they have wealth at all, is housing, and the housing market has been dismal. Even today it’s barely recovering.

But on the other hand, the stock market has seen a tremendous resurgence, in the United States especially, driven partly by the fact that the rest of the world isn’t growing, that people are parking their money here. But you’ve seen basically stock prices recover nicely since the deficit of 2009, early 2009. And so wealthy people have continued to benefit from this. And so we would expect, if we looked and updated these estimates now, we’d see the trend not, you know, just continue. It wouldn’t just be a 28 percent increase for the top group. It would be something more like 35 to 40.

JAY: And you can just imagine when you’re talking to someone who’s in that top tier group, who has seen their income increase dramatically over the last three years, and you say to them, well, austerity’s terrible because it’s going to prolong the recession, I imagine them saying, “And your point is?” I mean, they’re doing—they have cheap money, they have cheap labor, and the stock market’s doing just wonderful. So why exactly, if I’m in that position, do I want the recession to end?

HENRY: Well, one reason would be that you look forward to the political consequences of this and the kind of fear that eventually someone in Washington or, you know, the political party system in this country will notice the fact that most people are not better off, they’re worse off, and that existing policies aren’t working.

I mean, instead we’ve seen, you know, the—in fact, maybe this is another cause of comfort for the top-floor group. You know, we’ve seen relatively little concern on the part of policymakers about the radical increase in poverty and inequality in this country, and they’re bound and determined to make middle-class and poor people pay for the costs of this recession that they had nothing to do with, no responsibility for, by cutting things like Social Security and spending on lots of social programs.

So, you know, I don’t know why the rich have anything to fear. They certainly haven’t gotten much hard medicine from the Obama administration, even though the millionaire tax increase, you know, has been implemented. That’s about the only thing you can really point to in terms of increased pain for the top. And at the same time, you’ve seen payroll taxes increase by even more, so that’s pretty much offset any distributional effects there. So, you know, maybe we have to appeal to the rich on moral grounds. I don’t know whether [crosstalk]

HENRY: Yeah. Well, we—you know, we’re sort of out of—in Europe, you know, where they’ve seen even deeper cuts in government spending and wider disparities, you’ve seen the beginning of mass movements. You know, Occupy movement in the United States has kind of left the field. You know, I have no really good explanation for that other than the fact that our political leaders, there are darned few of them who have been willing to take up the cause here.

JAY: Right. I mean, if you think about political consequences, I don’t think they’re going to come from within the stratum of people that are doing so well. And so, many politicians are beholden to them. And then the way the party system is here, you think if you’re going to punish the Democrats for not being tough on this and then you’re going to support the Republicans—. I guess it’s time people have to start thinking about something more independent of all of this.

HENRY: You’d like to believe that during this period of time, which is now approaching the length of the Great Depression in the ’30s and shows, you know, sort of very mediocre performance, even in the United States, that there would be some political consequences for, basically, accepting this kind of budget, this kind of, you know, I would call it bloodletting approach to economic policy, you know, over time. And we have more and more long-term unemployed, many more people who are living on the margins of existence. Twenty-three percent of U.S. kids are in poverty. And, you know, many seniors are experiencing the same thing.

The problem is that these groups that are worst hit here and are seeing their wealth and incomes decline, you know, are just the least well represented in Washington at this point in time.

JAY: I should add, in the media as well.

HENRY: And the media as well, and I hate to see it.