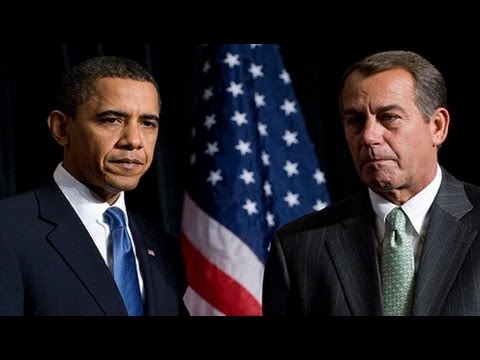 PAUL JAY, SENIOR EDITOR, TRNN: Welcome to The Real News Network. I’m Paul Jay in Baltimore. And welcome to the first in a series of regular reports by James S.Â Henry, who now joins us from Long Island, New York.

HENRY: Well, we have this fiscal cliff situation everyone in the world is talking about. I think the background story that not so many people are focusing on is the attempt by big business to get extra kind of tax cuts for themselves in the form of reduced corporate income tax rates, and maybe even getting the Obama administration to support this. So that’s one of the key things this year that we’ve been focusing at Tax Justice Network on, the role of tax havens in the international economy. And this is just one example of that, because many of the largest companies, it’s been revealed, companies like Apple and Google and Pfizer, General Electric, are making aggressive use of offshore havens to transfer their intellectual assets, their brands, and software offshore to places like Bermuda and Ireland, and then pay themselves royalties that don’t get taxed. And this is costing upwards of $70Â billion a year to the Treasury. So in the course of the fiscal-cliff negotiations, we understand Tim Geithner has been proposing, as a sweetener to the deal to get Republican support, that we have a shift in the U.S. corporate income tax toward a territorial tax, which would really amount to a big tax cut for major multinationals.

JAY: What does that mean, “territorial tax”?

HENRY: Well, it means that all the income that’s produced by their offshore activitiesâ€”for example, GE has 60Â percent of its business offshore right nowâ€”would not be taxed by the U.S. Treasury. They’d only tax those activities that are deemed within the United States. And so that would just further reinforce this game of shifting intellectual property, which is a big part of the value of companies like Apple and Google, to offshore places and locations, where, you know, actually the property wasn’t created. The intellectual ideas and the patents were all derived from U.S.-based design shops. But it would essentially mean a lot of the value of these companies moves beyond the reach of the U.S. tax system. And so that meansâ€”.

JAY: What’s the current status quo on that type of intellectual property and taxes?

HENRY: Well, right now they’ve been making increasing use of these offshore haven abuses, and TJN has estimated that they cost the Treasury about $70-90Â billion a year. But the offshoring of all activities in addition to intellectual property would beâ€”manufacturing, sales, marketingâ€”that would really make a big hole in the U.S. tax system, especially for small business, which can’t take advantage of these international games. And so, you know, that’s one of the issues we’ve been following.

And we put together a coalition here of about 600 organizations in the last couple of weeks that have tried to come out representing small business, ordinary taxpayers, environmental groups, lots of people who are just concerned about tax justice, to fight this sleeper deal.

JAY: I think it should be noted, if my memory serves me right, that the president of General Electric was appointed by President Obama as one of his economicâ€”chairman of one of his advisory committees, I believe, before the last election.

HENRY: Well, he was in charge of the employment, the group that was supposed to fix the unemployment problem, the competitiveness council. Actually, Obama’s got quite a few senior people from companies like Honeywell, Google. Eric Schmidt’s been very close to the Obama administration. You know, the head of JPMorgan. All these people have entrÃ©e to the White House. So we have a kind of moderate Republican as president. I might as well say that. If the Republican Party had not moved itself so far to the right, you know, Obama’s policies, I think, on economics look pretty darned conservative here, especially these corporate tax cuts.

JAY: Just to be clear for me, the current state of taxation on intellectual property is what? Like, what are they changing?

HENRY: Well, what they’ll reallyâ€”going to be doing, I think, if they really move to a territorial tax, is that they will generalize what’s going on already with the intellectual property activities to all other kinds of corporate activities. So any offshore activity will essentially be for the first time beyond the reach of the U.S. corporate tax system. So it’s really that the shifting of intellectual property just becomes a special case of what the big-business community wants for the rest of the corporate tax system.

This is going to amount to a major problem for small businesses that have to compete with these multinational companies, because they can’t take advantage of many of these offshore games. And, you know, many of the small businesses are actually taxed at individual tax rates because they’re LLCs or chapter SÂ corporations. And those are all facing potential tax increases under the president’s plan. So this is a major issue. I think it’s becoming, in the background, something that the progressive groups are beginning to realize is a real problem with the administration’s position.

JAY: And it’s being thrown out as if it’s a compromise for the Republicans in order to sign the deal. But it sounds like something President Obama’s in favor of anyway.

HENRY: Well, it’s something that he hasn’t really resisted. He talked back in February about, you know, induction in the nominal rate of corporate taxes in the United States from 35Â percent to the neighborhood of 20.

But this is a global arms race. I mean, you had Canada cut its corporate tax rate toâ€”federal rate to 15Â percent back in January of this year. You had the United Kingdom cut its rate to 21Â percent. And you’ve seen over the last 30Â years this kind of arms race going on among major OECD countries, where they’re all cutting corporate taxes, so thatâ€”taxation, so that today the corporate income tax as a share of federal revenue is already, prior to all these cuts, at an all-time low.

So we have, you know, basically seen the sharp erosion of the corporate income tax already in this country, and Obama’s apparently engaged in a discussion to try to actually make it even more limited.

JAY: In his campaign about revitalizing American industry and all the rest during the presidential campaign, I thought he wasâ€”one of the things he said is he was going to reduce tax incentives to produce offshore. This sounds like it’s the opposite of that.

HENRY: Well, there’s been no discussion, really. There’s been a series of revelations over the last year about how companies like Apple and Google and Pfizer have been abusing the system. But the administration has done, really, nothing to close this particular class of loopholes. There’s a whole film that we produced, Sundance documentary, which I think your viewers can see a link to, called We’re Not Broke, which goes into this in a lot of detail. So if you’re interested in finding out how the system really works for the truly influential multinational companies, you can take a look at that video.

The bottom line is the Obama administration has been very, I would say, disappointing on this particular front, the corporate income taxation. They seem to be on the brink of giving away the store.

JAY: Alright. Thanks very much for joining us, James.