The Debate: Why Didn’t Obama Defend his Record?

James Henry: Obama has accomplishments he could have defended, but he was more concerned with appearance than substance

James Henry: Obama has accomplishments he could have defended, but he was more concerned with appearance than substance 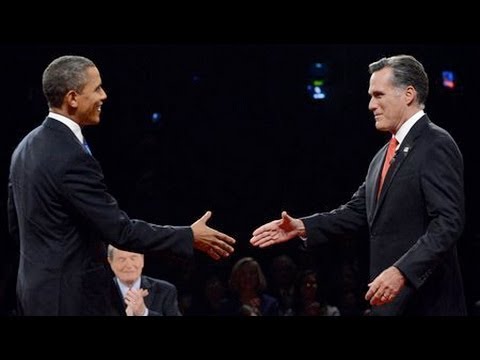 Well, in a presidential election campaign which has as much to do with reality as professional wrestling, we had a debate which is even further from reality. Anyway, now joining us to give us his take on the debate is James Henry. James, he’s an economist, an attorney, investigative journalist. He served as chief economist at the international consultancy firm McKinsey & Company. And he’s written for Forbes, The Nation, New York Times, and others. Thanks for joining us, James.

JAY: So what did you make of the theater last night?

HENRY: Well, it was like you’d rather watch paint dry. I mean, I wasâ€”as a diehard progressive, I was waiting for Obama to start punching. He was kind of in his corner taking shots all night long, and he missed a lot of opportunities, I thought, to correct Romney on factual errors, and then to just remind Americans of who exactly this guy is. You know, this is the 47 percent basher. This is the fellow who’s an offshore millionaire. This is the kind of quintessential representative of the 0.1 percent. And he’s got us, you know, wishing we were back dealing with Ronald Reagan. I mean, it was an evening that was just kind of bizarre.

JAY: I thought Romney was very successful at doing something that Obama’s been doing kind of for the last four years, which is, you know, to a large extent Obama kind of has adopted many Republican positions, including, according to Obama, his own health care plan comes from the Republicans, except during the debate, Romney was adopting Democratic Obama positionsâ€”you know, I’m forâ€”preexisting conditions should be insured and it doesn’tâ€”I’m not for taxing the rich orâ€”I mean, for lowering taxes.

HENRY: This was clearly Romney the bleeding-heart liberal. You know, he was expressing sympathy with the jobless and the, you know, 50 million people on food stamps. He was expressing condolences for people who were having their insurance premiums increase. There was a sort of a long litany of people that he was feeling sorry for.

JAY: And how is it possible that Obama couldn’t punch through that?

HENRY: Well, I think the president probably showed up here trying to be presidential. That’s probablyâ€”it may not be in Obama’s bones. You really don’t know. We’ve never seen him in many of these head-to-head debates, you know, to be confrontational. And what he was dealing with here was someone who was, you know, really representing a program that, if it’s enacted, will result in austerity, a lot of hardship for the poor and the middle classes, you know, exactly the people Obama chooses to represent.

But Obama’s, on many of these issues, said, you know, I don’t really differ that much from Governor Romney on cutting corporate taxes, for example. I thought that was astonishing. You know, corporate tax loopholes are one of the big revenue opportunities here. We have companies like Apple and Pfizer and Google transferring intellectual property and setting up, you know, pseudo labs offshore, transferring jobs offshore, and then paying themselves royalties to tax havens. You know, that’s worth $100 billion a year right there. So, you know, again and again in this debate I found the president kind of asleep at the switch.

JAY: I mean, is it partly, too, that the difference between these two is to a large extent a matter of degree, not a real substantive, qualitative difference? I mean, when President Obama’s out on the campaign trail amongst his supporters, his rhetoric is, you know, very progressive-sounding. But when you examine the last four years, there’s not a heck of a lot he’s done that at least a centrist Republican couldn’t have supported.

HENRY: Well, I’ve been critical of his jobs program since day one. I thought that he should have had a much larger stimulus and not crowded it up with so much tax cuts for the top 10 percent. He relied very heavily on corporate tax cuts to stimulate jobs, and that just didn’t work. And I think he really was preoccupied with the health-care plan as if there wasn’t a deep crisis in the economy for the first two years, when he should have been gettingâ€”using the congressional majority to really enact the largest stimulus. He also had an opportunity, I think, to deal with the banks much more forcefully and to actually reorganize the banking industry rather than bail them out with, you know, hundreds of billions, if not trillions of dollars.

But I think on many issues here, you know, Obama didn’t defend the kind of record that he’s had. I mean, the fact is, the stock market is up 30 percent; people are anticipating a recovery. You know, there’s not 23 million jobless in this country right now; there’s more like 14 million unemployed. You know, the numbers are moving in the right direction. And he’s created quite a few, you know, jobs over the last four years. So we’re moving in the right directions. And, you know, much of, you know, compared to other economies around the planet, we’ve certainly weathered this crisis pretty well.

So, you know, I think that Romney got off with a lot of, you know, superficial analaysis tonight, you know, the business about the $5 trillion tax cut, and I think it was hard for most Americans to understand who was right on that issue. But the fact is that Romney has endorsed eliminating the taxes on the wealthy and extending the Bush tax cuts so that that amounts, effectively, to a big tax reduction for the top earning classes that he would be willing to make permanent.

JAY: Well, the other thing is President Obama actually didn’t even mention the main economic strategy of the administration, which is actually what the Fed’s doing, not what he’s doing. It’s, you know, quantitative easing and, you know, giving tons of moneyâ€”which is supposed to create liquidityâ€”giving tons of money to the big banks, which is supposed to then lend it, except they’re not. That strategy he didn’t even mention, and that’s really all he’s got right now.

HENRY: Well, I think the Fed has been doing most of his work for him.

But, you know, to give him credit, he has had difficulty with the Republican-dominated Congress. They’ve been blocking any kind of significant increase in spending or any kind of fiscal reform. So, you know, that’s an obstacle that he didn’t refer to, either. So the whole thing was a little, as I said before, bizarre.

Here we had the deepest recession in 70 years, we’ve hadâ€”you know, that was based in large part on deregulation, excessive deregulation of the financial sector. And we’ve also had, you know, the Bush tax cuts, which created a big part of the deficit that Obama inherited and these two unfinanced wars. And now we’re seeing an election where, you know, we have the Republicans coming in on another tax-cutting agenda, spending-cutting agenda, and being let, essentially, back into the race. So at this late date it’s very disturbing.

JAY: Right. Thanks for joining us, James.

HENRY: Quite welcome. Thanks.