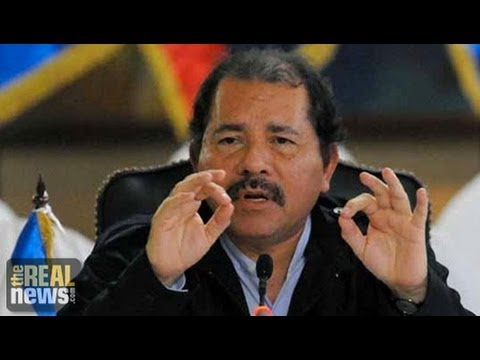 JAISAL NOOR, TRNN PRODUCER: Welcome to The Real News Network. I’m Jaisal Noor in Baltimore. And welcome to this latest edition of The Henry Report.

NOOR: So, James, you’ve written extensively about Nicaragua in the past. Its current president, Daniel Ortega, who is a Sandinista, he took on and helped defeat the Somoza dictatorship, which was backed by the United States. And you’re in Managua now, the capital of Nicaragua. What can you tell us about the current situation with the Ortega presidency?

HENRY: Well, I’ve been very sympathetic to the Nicaraguan struggle against foreign intervention over the years, and I’ve written about it, but it seems that in his latest incarnation, Daniel Ortega has been not only turning to the right, but he’s also adopted a kind of a–in the search, maybe, for new partners to replace the subsidies he’s gotten from Venezuela or to insure against possible changes there, he’s turned to China with the idea of a $40 billion Nicaraguan Canal project. He’s awarded a 100-year concession to an obscure Hong Kong company, HKND, that set up a Cayman Islands subsidiary [incompr.] the developing world in terms of actually completing their wireless networks. And here they’ve been given a concession to build a $40 billion Canal.

The second thing that’s happened in just the last couple of weeks is Ortega has announced that he’s using his supermajority in the national congress to go for reforms of 39 articles out of the 1995 Nicaraguan Constitution, which will considerably strengthen his hand. It eliminates the term limits, the ban on running for office more than two terms. He’s already since violated that.

But in addition to that, it allows military officers to serve in public office. It allows spying by internet companies on Nicaraguan communications. It enshrines the China deal that he’s done in the Constitution. So this deal that’s basically, you know, a kind of a giveaway–it doesn’t generate much revenue for Nicaragua, because the taxes on any income to the canal will be tax free, channeled through this offshore company. And he’s also strengthened the role of the party that he represents with their family courts giving [incompr.] Constitution. So there’s a whole sort of serious set of concerns by human rights organizations here about this move toward authoritarian government.

And that’s on top of a tax reform which was one of the most regressive tax reforms and Nicaraguan history. Nicaragua is essentially giving more than $500 million a year in tax subsidies to corporate interests, and they allowed the business council to essentially write this law that was passed without any real discussion late last year. Already the folks who are working for tax justice in Nicaragua are really very concerned about the fact that this is enshrining a much more regressive tax system in Nicaragua. We’re talking about a country with the second-lowest per capita income in Latin America, and it certainly can’t afford to have more inequality than it already does.

So all of these three developments–the China dam, the authoritarian constitutional changes, and the regressive tax–add up to this kind of weird reversal of policies on the part of the Ortega regime toward a system that we find virtually unrecognizable.

NOOR: So, James, left-wing leaders are often vilified by the Western media for carrying out almost the same exact actions that Ortega is carrying out right now. And Ortega was a former leftist. Would you still call him a leftist today?

HENRY: Well, he’s made some very strange alliances with the church down here. It’s–you know, they’ve introduced bans on therapeutic abortions that have set back women’s rights, I think, a century. He’s also basically recruited the COSEP, which is the large–it’s, you know, the representative of the largest business interests in the country–to get behind this dam and to help write this tax reform, which was basically a handout to capital and to upper-income groups.

So, no, I wouldn’t call him a leftist, except in some kind of nostalgic way. I mean, he was active in the revolution, deposed Somoza in 1979. But, you know, he’s gone through a lot of different iterations, and I think this latest one is very disturbing.

NOOR: James S. Henry, thank you so much for that update on the conditions in Nicaragua.