James Henry: European banks in countries like Germany and Austria have a vested interest in a stable Ukraine because of trillions in outstanding debt

James Henry: European banks in countries like Germany and Austria have a vested interest in a stable Ukraine because of trillions in outstanding debt 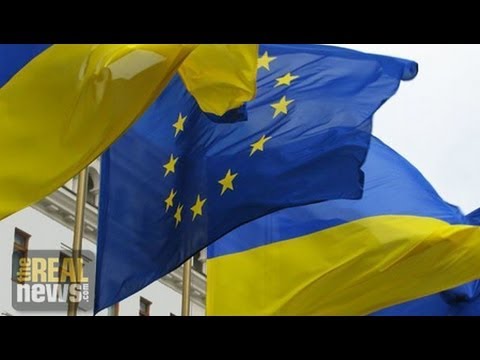 JESSICA DESVARIEUX, TRNN PRODUCER: Welcome to The Real News Network. I’m Jessica Desvarieux in Baltimore. And welcome to this edition of The Henry Report.

Now joining us is James Henry. Henry is a leading economist, attorney, and investigative journalist who has written extensively about global issues.

Thank you for joining us, James.

DESVARIEUX: So, James, this interview is really going to be focused on Ukraine and its connections to Western banks. And although we’ve heard most of the media coverage about Ukraine is really focused on domestic politics, Russia’s military, Europe’s dependence on Russian natural gas, and so on, so forth, can you tell us about the economic angle of the story that’s missing?

HENRY: Yeah. One of the big story elements that’s missing from this situation is the incredible exposure of European banks, especially from Austria, Germany, Italy, Portugal, and Greece in terms of loans that they’ve made since 2005. Their lending to Ukraine and its eight neighbors has increased by about threefold to nearly $1.4 trillion.

And so, you know, Austria in particular has about 35 percent of their total foreign bank loan portfolio in these nine countries. Germany has about 5 percent. Italy has 27 percent. And, amazingly, Greece and Portugal, which we, you know, associate with being bankrupt themselves, have put 18 to 20 percent of their loans into Ukraine and its neighbors–Hungary, Slovakia, Poland, Belarus, Bulgaria, and Russia itself.

Now, some of these countries have reserves. Russia, for example, has more than $550 billion of foreign reserves. But when you take out the reserves of the other countries, most of them are still heavy net borrowers. And so if there were some kind of economic crisis or if we tried to really assert trade sanctions or, you know, crack down on the foreign assets of Russian oligarchs, for example, I think a lot of these Western banks are concerned that it would sink the fragile European economic recovery and basically, you know, put a lot of these Western banks under.

So the question is, you know, for economic foreign policy here, how do we apply any pressure at all to Russia? God forbid there’s a military confrontation, you know, given this exposure of these European banks.

DESVARIEUX: And when you think about the Ukrainian crisis, specifically in the Crimea and sort of this ramping up of the militarization in that region, you can’t forget, though, that there is a $15 billion IMF deal on the table. Right, James? And how is that working out? Because essentially both the West and Russia want this deal. Can you explain why?

HENRY: Well, Russia was originally going to put up $15 billion when Yanukovych was still prime minister and running the show, but since he was ousted, they withdrew that offer. I think the latest–the problem that Ukraine faces is that they have some big bills coming due. They have to–$1.9 billion of outstanding debt to Gazprom, the Russian gas company. And, you know, the number we have (but it’s shaky) is $15-20 billion just to get through the end of the year.

So, traditionally the IMF doesn’t do that for free. They come in and they’ll lend money under so-called stabilization programs, which generally means, you know, a cutback in economic growth and domestic consumption in order to pay the creditors. Ukraine’s outstanding debt right now is north of $200 billion. And so we’re talking about a substantial amount of money just to pay those banks that have loaned so heavily to the Ukraine.

But more generally, Ukraine’s other neighbors are also heavy borrowers. In fact, the interesting thing is that in the wake of the mortgage crisis in 2008, I think Western banks took a look around at who was borrowing, and they said, well, this is a good idea, let’s lend money to Eastern Europe. And so they’ve done a lot of heavy lending here.

DESVARIEUX: So, James, I want to get your take on what’s being said here in the United States about how we could essentially curb Russia’s influence and try to cripple them through sanctions and other financial means. Can we really, though, afford to hurt Russia economically?

HENRY: I think the reality here is that in this area the national security pundits and the politicians, and some journalists who’ve been covering this story (rather ineptly, I think), have ignored the fact that there’s all this exposure by European banks, and, therefore, the whole European economy, to what goes on with the Ukrainian situation. Typically the economists don’t get asked about national security questions until it’s too late. And here we’ve had, effectively, foreign policy being made by private financial institutions that have managed to get up to their eyeballs in lending to a bunch of countries in Eastern Europe that are now–we would like to apply pressure to [incompr.] do that, we’re likely to sink these banks. So it’s a good lesson for the future in terms of the reality of conducting policy in a world where banks make a lot of the decisions.

DESVARIEUX: Alright. James Henry, thank you so much for joining us.