Joel Handley says the Chicago Police Department has been using "stingray" spying equipment to track activists and their movements in Chicago, but the trend is spreading.

Joel Handley says the Chicago Police Department has been using "stingray" spying equipment to track activists and their movements in Chicago, but the trend is spreading. 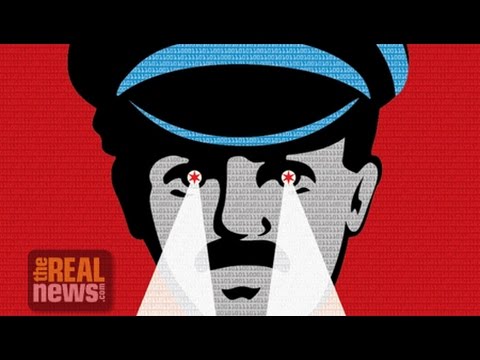 The cover story published in In These Times magazine has exposed how Chicago police are spending millions to spy on the public. Namely, peaceful protesters using high-tech gadgets. The stingray technology are suitcase-sized devices that capture nearly all wireless transmissions from cell phones and tablets. In These Times has reported that Chicago police use stingray technology to monitor social justice activists such as Black Lives Matter and anti-globalization protesters. But we have recently found out that this is not unique to Chicago, and that this technology has been used to track cell phones in thousands of cases in Baltimore.

Joining us now to talk about this is Joel Handley. He is the author of the article, titled Who Do You Protect, Who Do You Surveil? published in In These Times magazine. Joel, thank you so much for joining us today.

PERIES: So Joel, you wrote that stingray technology is used to target peaceful protesters, and can penetrate the walls of a home and track people and their movements inside. What can you tell us about this type of technology and how it is done?

HANDLEY: Sure. So the stingray is a generic term. It is, there is a specific brand named StingRay cell tracking device that’s sold by the Harris Corporation, but the stingray is kind of this broader term that can also be used to just, to include any type of cell tracking technology that works in a similar way.

So the Chicago police department has had one as early as 2005, but no one in Chicago knew about that until a local activist named Freddy Martinez submitted a FOIA lawsuit in order to get the police department to say what they had.

PERIES: This is an FOI request, freedom of information request. Okay.

PERIES: And why did they suspect they had that technology?

HANDLEY: There are many complaints at the corners of where the different Occupy events were going on of cell phones not working properly, of the signal coming in and out, of there being interference. And though it wasn’t known at the time, it has since come out and been verified by the FBI that stingray technology does in fact interfere with regular cell network functions.

And then there was an event during one of the Black Lives Matter protests in November of 2014 where there was a surveillance vehicle that had been trailing the protest that people were already aware of, and then just by happenstance someone was able to record the call from one police officer to the local fusion center asking them if they had any information from the cell phone of one of the march organizers. So they were trying to figure out where the march was heading, what was going on, and they let it slip that they were monitoring her cell phone.

HANDLEY: Sure. The technology itself, all of the stingray devices that are deployed in Chicago and elsewhere, they don’t–you can use them to pinpoint individual phones, but they suck up the information of all the devices within their range. So that’s generally up to about a mile radius, several city blocks. So if you use that pretty much anywhere in Chicago or in Baltimore, you’re going to be getting information from the cell phones, the tablets, and other wireless devices of everyone in that area, not just the target.

HANDLEY: Specifically to the stingray, part of the secrecy with which police departments have gone about using the technology is why–it’s an attempt by them to kind of circumvent these kind of legal questions. The fear is that if it gets out in the open, if the public realizes how stingrays are used and how widely they’re used, then these types of questions are going to come up, whether it’s constitutional. The ACLU has come out against stingrays, in large part because of this, their argument that it’s unconstitutional. That you can’t vacuum up all of this data of innocent citizens, or people suspected of no wrongdoing. And especially with the location tracking aspect of it, that’s just a clear Fourth Amendment protection that’s being violated. You can’t monitor people, their movements within their homes, their movements as they go about their daily lives.

PERIES: Joel, this is–the problem with this kind of technology is that it impinges on other constitutional rights, like the right to organize, right to protest, and so on. So how are they justifying the use of these surveillance technologies?

HANDLEY: Well, the Chicago police department, part of their arsenal includes stingrays but it also includes many different technologies as well. It includes this network of tens of thousands of surveillance cameras which are matched and connected into the local fusion center, and into another city department that monitors the camera feeds. It has automatic license plate readers that are collecting location data all over the place, all over the city as well.

And for the most part with this technology, outside of the stingray which they’ve been secretive of the whole time, they want people to know that it exists. They’ll usually do some kind of big publicity push when they first introduce the technology. One example of that is with the first arrest of facial recognition technology. When that arrest occurred there was a press release about it. The police department wanted people to know that they had this on hand. But then all of the attempts by me and other journalists to figure out what future facial recognition technology cases they had, you know, what types of arrests they’re using them to make, they’ve closed down.

So they’re being very secretive about all of the technology that they have on hand, outside of those early press releases touting some capabilities.

PERIES: Now, from your investigation, did you find–or should I ask you how much of our money is being spent on these type of surveillance technologies and programs?

HANDLEY: Sure. There are some specific figures. Nationally the Department of Homeland Security has spent more than $34 billion to local police departments, giving them grants to buy these types of technologies. Stingrays, facial recognition, automatic license plate scanners. In Chicago itself, Chicago has spent almost $50 million on its camera network. It’s spent close to $650,000 on stingray equipment, the original device and many upgrades along the way. And that’s just what we know about. It’s clear from the documents that are available that they’ve bought–or it’s clear from the documents that there are things, there are devices they have bought that have not been documented. It’s also spent, the Chicago police department has spent more than $5 million on facial recognition, and it’s spent over $100 million integrating these technologies into this central data center.

HANDLEY: Sure. Response from activists have basically–many activists I’ve talked to appreciate the fact that someone is now looking into this. If you’re an activist on the ground, if you’re a street-level protester in Chicago, a lot of these things they’ve talked among themselves, they’ve known about for longer than the press in Chicago has been talking about them. So I think it’s some kind of relief that there’s, that this stuff is getting out in the open.

And as far as protecting ourselves, not quite sure if I’m qualified to get into that too much. But it seems to me that there needs to be regulations, these types of things need to be out in the open. The use of this technology needs to be more widely known. And the police department first off needs to be able to tell its citizens why it thinks this is necessary. They have to be honest about how and when they’re using this, and in specifically the case of the stingray that same activist, Freddy Martinez, is now suing the police department to be told in what types of cases, in what specific circumstances it has used the stingray in the past.

So if they can’t even, if police like Chicago police department and others across the country can’t even tell the citizens of their city what it is that they’re using it against, then I think that’s the first hurdle to get to before we start discussing how to get around, how to get past the use of this technology.

PERIES: Joel Handley from In These Times, cover story this month. Thank you so much for joining us today.

Joel Handley, a former assistant editor at In These Times, is a Chicago-based journalist and editor.