What Do Ordinary Israelis Think of Netanyahu’s U.S. Visit?

Jeff Halper, co-founder and Director of Israeli Committee Against Housing Demolitions, says neither the professional soldiers nor the people of Israel believe that Iran is an immediate security threat

Jeff Halper, co-founder and Director of Israeli Committee Against Housing Demolitions, says neither the professional soldiers nor the people of Israel believe that Iran is an immediate security threat 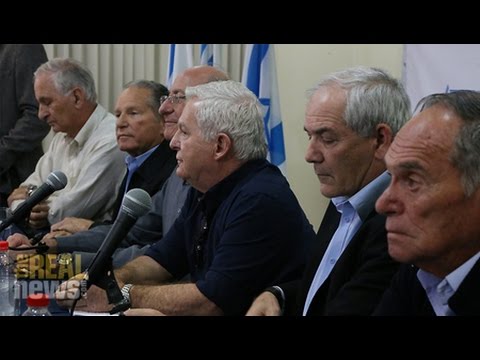 Prime Minister Netanyahu campaigns on being the security prime minister, the one that will secure Israel from all existential threats.

Now a group of former Israeli military commanders has stated in a press conference and a television ad campaign exactly the opposite. They say that Netanyahu has led Israel into the worst security posture it has ever seen. For instance, Hamas is stronger. And now the terror front has exposed Israel’s Golan Heights border with Syria. And Israel’s ties with the U.S. is severely damaged, which is the basis for security of Israel. So Prime Minister Netanyahu may be in Washington this week, but what is going on in Israel could be more important to his political life. Latest polls are showing a narrowing gap between his Likud Party and the Zionist Union Party led by Isaac Herzog, which is a center-left alliance in Israel.

Now joining me to discuss all of this is Jeff Halper. Jeff Halper is a cofounder and director of ICAHD, the Israeli Committee Against House Demolitions. He is the author of many books, the latest among them War Against the People of Israel: The Palestinians and the Global Pacification.

Thanks you so much for joining me, Jeff.

JEFF HALPER, COFOUNDER AND DIRECTOR, ICAHD: Thanks for having me on.

PERIES: So, Jeff, who are the generals, and what are they hoping to accomplish in this press conference and in the ads?

HALPER: Well, it’s funny to say this, but there is a kind of a liberal wing of the Israeli army. These are mainly retired commanders, either army commanders, security officials, and so on. So these are people in their 60s, 70s, even 80s. And until about 15 years ago, the upper echelons of the Israeli army were really people that came into the army through the Labor Party. They were from the kibbutz movement, a lot of them, and they were more liberal left, connected to Labor Party, Rabin and that kind of a generation. And that’s who these people are. They’re professional soldiers. They’re not apparatchiks.

But the people that were speaking in this Security Council were really professional soldiers that were genuinely saying, elections aside, what you’re doing, Netanyahu, is very dangerous for Israel, and it’s really imperiling our security. So they’re speaking as very authoritative and respected military people.

PERIES: And do you think they were trying to influence the political campaigns going on?

HALPER: No, I don’t think so. I don’t think this had anything to do with the elections. I mean, Netanyahu’s going to Washington of course has everything to do with the elections. But they were really–I think they’re really alarmed with the fact that Netanyahu has kind of hijacked one of the most important security issues facing Israel, which is Iran on one side and relations to the United States on the other side for his own electoral campaign and his genuinely imperiled Israeli security. So I think these guys are coming from a real professional military place, and I think the timing of their press conference [had to do with (?)] simply Netanyahu’s timing of going to Congress. But I think their concern was much more military and professional than it was electoral.

PERIES: Now, one of the concerns that they have is all of this war footing is really camouflaging the real economic conditions on the ground and what’s happening with the ordinary Israeli people. Now, can you describe what some of that is? Because you work in the area of housing yourself.

HALPER: Well, you know, Netanyahu is strong, in a sense, in the issues of security.

But his weak side, tremendously weak, is the economy. He’s a neocon Republican, basically. We had in 2011 huge social protests, our Occupy movement against the prices of housing, of food, in general the expensive cost of living here in Israel. Even now, just in this last week, tens of thousands of people have descended on Tel Aviv again as a kind of a protest against Netanyahu. So his neoliberal policies are not popular at all in Israel. So the more he can deflect attention from that and present himself as this leader who’s concerned with Israel’s security and Iran becomes the main electoral issue, that strengthens him. So it is an attempt to try to deflect attention away from the economic woes of Israel under his tenure and look more into the security directions, where he feels stronger.

PERIES: Now, he’s carrying that torch to Washington, saying that Israel is really threatened by Iran. How much truth is there to that, and how is that being received on the ground?

But it isn’t that they’re about to attack Israel. And, in fact, if Israel really was concerned about a nuclear attack from Iran or anywhere else, it would agree to what the Arabs have said for decades: let’s have the entire Middle East be free of nuclear weapons. You can’t have an Israel with two to three hundred nuclear warheads on one side of Iran, have Pakistan, India, Russia on the other side, encircle Iran with nuclear missiles, and then expect Iran simply to sit there.

So I think that if Israel was sincere about really wanting to end nuclear threats in general, they would agree to have the entire Middle East be nuclear-free, and then nobody has to worry. So it’s all kind of a cynical attempt, I think, to create a straw man in terms of Iran.

Israel needs to perpetuate the occupation. The Palestinians aren’t enough of an enemy anymore. There’s not enough conflict generated. And in order to keep themselves on the map and to keep themselves (even in terms of selling weaponry) in a conflict situation. Israel needs conflict, and Iran is the most easy place to generate that. But in fact it’s really a strongman, because the whole Iranian nuclear issue is kind of a fake issue anyway.

PERIES: This is what you think. However, what do the Israelis think in terms of Iran? Are they a serious threat to Israel?

HALPER: No. Iran is not an issue in Israel. Nobody’s afraid of Iran. Nobody’s talking about Iran. It’s all completely a made-up Netanyahu sort of a thing. He’s trying to generate. That’s the way he works. Fear, anxiety. He’s trying to create an issue out of Iran. The Israeli people are not worried about Iran. Ehud Barak, who was the last minister of defense, said outright–under Netanyahu he was the minister of defense–said Iran does not pose any existential threat to Israel. And this is a professional military guy who was also the prime minister at one point. So it’s a completely fake thing. And the Israelis don’t care about it.

The problem for Netanyahu is it’s the only thing he has. He’s very unpopular.

PERIES: And obviously these generals and coming out with this press conference and this campaign on television also feels that Iran is not a threat, that this is a big–

PERIES: –ploy on the part of Netanyahu.

HALPER: What they’re saying is the rift with United States over bypassing Obama, bypassing the administration, and going right to Congress through the Republicans, that rift–and we see it’s very strong, is more of a security threat. That’s the security threat to Israel, not Iran. So, in fact, in order to make Iran a kind of an electoral issue, Obama–I’m sorry–Netanyahu is genuinely jeopardizing Israeli security by creating a rift with Israel’s major patron in the world, which is the United States, and not only the United States, but the Democratic Party.

The Democratic Party has always been more pro-Israel than the Republicans, actually. You know, 70 percent of American Jews vote Democratic. And so, to in a sense align himself in a partisan way with the Republicans to embarrass Obama and to create this kind of a false issue is really jeopardizing in a double way Israel’s relations to the States, to the administration on the one hand, but to the Democratic Party on the other hand. If Obama is not succeeded by a Republican president, Israel’s in big trouble.

PERIES: Jeff, I thank you so much for joining us today, and we look forward to future interviews with you.

HALPER: Okay. Thanks for having me on.

Jeff Halper is the co-founder and director of ICAHD, the Israeli Committee Against House Demolitions. He was born in 1946 in Minnesota and emigrated to Israel in 1973. Since then he has been a tireless advocate for justice and civil rights for all Israelis and Palestinians. He spent ten years as a community worker in…