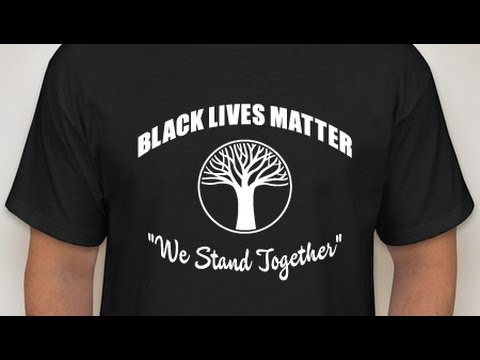 On Wednesday October 19th, over a thousand Seattle teachers will come out in support of Black Lives Matter movement by wearing Black Lives Matter t shirts to school and some of them will be teaching classes about institutional racism.

Joining us now from Seattle to discuss all of this is Jesse Hagopian. Jesse teaches history at Garfield High and is the Black Student Union adviser at the school, the site of the 2013 historic boycott of the MAP, the Measurement Aptitude Progress test. Jesse is an associate editor of the Rethinking Schools magazine and founding member of Social Equality Educators, and blogs at I’mAnEducator.com.

Jesse thank you so much for joining us today.

JESSE HAGOPIAN: Thanks so much for having me on.

PERIES: So Jesse give us a map of how these protests came to be and how you and thousands of teachers got approval of this effort from the schoolboard.

HAGOPIAN: Well this action of wearing Black Lives Matter Shirts on October 19th to school and affirming our black children’s lives really was started by elementary school teachers and educators and community members and one particular school, John Muir Elementary, they were joined by a group called Black Men United to Change the Narrative and the idea was that beginning of the school year there would be many black community members and families out in front of the school high fiving students and celebrating them as they came into school and the teachers wanted to support that effort and they designed a black lives matters shirt that says we stand together, black lives matter.

And unfortunately some hateful person made a threat to their school, a violent threat of John Muir in an attempt to shut down that joyous celebration of black lives and while it was supposed to be canceled, most of the staff followed through and wore the shirt and many of the community members came anyway and held that event. When we heard of their courage and persisting to demand that their students’ lives are important, many of the teachers and social equality educators decided it was time to show solidarity and we brought forward a resolution to the union.

One of my colleagues put it forward and it passed unanimously in the Seattle Education Associate, the union that represents teachers and other educators in the Seattle public schools and it was a incredible show of strength that has only continued because now the Seattle Council PTSA voted to support it. The NAACP of Seattle has voted to support and today we just got a list of some 200 professor and academics from around the country who have signed on to a statement of support.

PERIES: Now while this is gaining a lot of momentum and positive reaction, there’s also a lot of negative reactions out there. In fact, there’s been some brutal attacks against what you’re doing. For example, in the Canadian Free Press today there’s an article by Matthew Vandum. He suggests that tax payer money should not be used to force feed left wing propaganda and that systemic racism is a figment of our imagination. He also connects this to the Clinton campaign saying this is an effort on the part of adopting some of her slogans and so on. How do you respond to people like that?

HAGOPIAN: That’s really shameful rhetoric. First of all, there’s no tax payer money being spent on these t shirts. We got a design from the John Muir Elementary School t-shirt and we have now sold over 2,000 shirts to educators and families across Seattle, and that’s money all raised by educators and family members. Second, to claim that institutional racism is a figment of our imagination flies in the face of reality and my every day experience. You can just look at the statistics in the Seattle public schools to understand why we need to declare that black lives matter.

In our schools, black students are suspended at 4 times the rate of white students for the very same infractions. That’s what institutional racism looks like in our school system. In our school system we have a deeply segregated school system where black students are not represented in our higher classes and we see that white students are dramatically disproportionately represented in our higher level course. We know that segregation in running rampant in our school system and there’s a dearth of culturally relevant curriculum in classes and I think one of the things that educators have really talked about is the need for ethnic studies programs in the schools like the recently passed in Portland, a resolution by the school board proclaiming that all high schools need to offer ethnic studies courses and these are some of the issues that we face in the Seattle public schools and why I think so many educators voted unanimously to support this day and so many families are excited about affirming the lives of our black children.

PERIES: Now what’s interesting about this political moment in history is that in the wake of the 49ers quarterback Colin Kaepernick’s protest of police killings by kneeling during the national anthem, the athletes at your school have taken lead from that and is continuing to do that as well, kneeling during football games, anthems, and the volleyball team is also doing that which is very nice because usually these kinds of efforts are kind of relegated to the debate team or the political science after school program and so on. But this seems to be fairly systemic within the school, these protests. How did that come about?

HAGOPIAN: Well it’s really moving to see young people decide that they’re going to act to make our world better and in the face of ongoing state violence, it seems to be so unaccountable. These young people on the Garfield High School football team chose to unanimously to take a knee during the playing of the national anthem in support of black lives and it spread. The girls volleyball team at Garfield is now taking a knee as well as the marching band and the cheerleaders and the Black Student Union and rarely do you see all those disparate groups come together in common cause but in a cause this important you’re seeing I think a new social movement in the Seattle public schools but really across the country with more and more high school students demanding to be heard and demanding that black lives matter in a myriad of different approaches whether it’s on the football field or it’s in the schools or at rallies, people have had enough with the institutional racism they’re seeing all over society and it’s really exciting.

PERIES: I must remind viewers that Jesse Hagopian was brutally pepper sprayed during a protest of Martin Luther King Day. It’s actually not a protest, a day of celebration and action that took place, so you’re the right person to be spearheading this kind of a campaign. Are you expecting or feeling any resistance from the community at all in terms of this action coming up?

HAGOPIAN: Well we’ve seen different hit pieces like the one you previously mentioned and we know that there are folks around the country who have sent in hateful statements or threats to our school district. But what’s incredible is the amount of solidarity we’ve received from our families, from the different educators, also from notable figures across the country like Melissa Harris Perry who signed on in support. John Carlos who raised his 5th on the 68th Olympic medal stand that became an iconic image of resistance has endorsed us. Seattle Seahawk Michael Bennett wants to come to our evening of celebration of black lives at school that we’re doing on Wednesday October 19th after school, holding a big forum show and rally to talk about what we mean by black lives matter at school. So that’s been really exciting.

PERIES: Jesse I thank you so much for joining us today and all the best on the 19th, I think there’s a great deal of nationwide support for your effort.

HAGOPIAN: Thanks for your time.

Jesse Hagopian teaches history and is the Black Student Union adviser at Garfield High School, the site of the historic boycott of the MAP test in 2013. Jesse is an associate editor of the acclaimed Rethinking Schools magazine and founding member of Social Equality Educators, and blogs at I’mAnEducator.com. He recently co-authored More Than a…