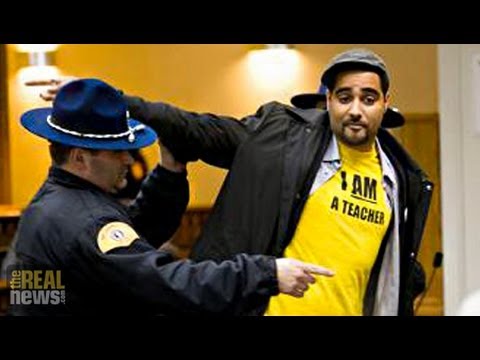 NBC’s three-day special on America’s public schools called Education Nation has just wrapped up in New York. Since its inception, Education Nation has been criticized and protested for a host of reasons, including that it’s sponsored by the Gates Foundation and for highlighting the voices of the corporate education movement while excluding voices of teachers, parents, and students who oppose policies backed by the corporate education movement. So viewers might have been surprised when they heard the following speaker on Education Nation just a few days ago.

JESSE HAGOPIAN, SEATTLE TEACHER AND ASSOC. EDITOR, RETHINKING SCHOOLS MAGAZINE: Well, teachers invented testing, so I’m not against testing, I’m not against assessment. But what I am against is the inundation of our classrooms with standardized testing. It’s gotten completely out of hand. You know, one parent in Chicago when I went to speak there told me their kindergartener takes 14 standardized tests a year. And this allows for no time for teaching. And I’m glad that you raised Finland, because in Finland, one of the highest-ranked school systems in the world, they only have one standardized test.

And let me just say that I think we need to reframe what the purpose of education is, because I think it’s not just about career-ready and college-ready. I think it’s also about solving real-life problems that we have in our world. We have endless wars, economic stagnation, and we have mass incarceration. And climate change is threatening the future of humanity. And none of those problems can be solved by bubbling A, B, C, or D.

NOOR: That was in fact a voice from the grassroots, a public school teacher from Seattle named Jesse Hagopian. Jesse teaches history and is the Black Student Union adviser at Garfield High, and he was the leader of the historic boycott of the MAP test earlier this year. He’s an associate editor of the acclaimed Rethinking Schools magazine and a founding member of Social Equality Educators. He blogs at IAmAnEducator.com.

Thank you so much for being with us again, Jesse.

HAGOPIAN: Oh, thank you so much for having me back.

NOOR: So, Jesse, we wanted to have you on to discuss this moment in education policy in this country, because as someone that’s followed public education pretty closely over the past few years and been following protest movements, movements against this corporate education reform, against high-stakes testing, against school closures, one or two years ago it would have been almost inconceivable for a public school teacher that opposes high-stakes testing that demands things like education and citizenship and solving the world’s problems to be featured on a show like NBC’s Education Nation. I think that’s a testament to the work you’ve done and that students and teachers and parents have done across the country. Put this moment in context for us.

HAGOPIAN: Yeah. Really the credit goes to the courageous educators at Garfield High School, whose stand last winter, refusing to administer the Measures of Academic Progress test and launching a boycott, I think has sparked a civil rights movement of some sort across this country. And the power of that movement couldn’t be denied, and it was so pervasive across the country last spring and into this school year that NBC contacted me to participate in their Education Nation forum.

And we saw in the wake of the boycott that was ultimately successful in Seattle an eruption of activism around high-stakes testing and removing these standardized tests from the classroom. We saw walkouts of students in Portland and in Chicago. We saw thousands upon thousands of parents in Long Island opt out their students. There was a mass march of some 13,000 parents, students, and teachers in Texas demanding an end to the high-stakes testing regime. And I think that the over a decade of policies launched with No Child Left Behind and then only reinforced with Race to the Top has really created mass opposition in this country to the narrowing of our curriculum with these high-stakes standardized tests that have been shown over and over again to only be a corrosive force in public education.

NOOR: Now, I mentioned this in the lead and I’ll repeat it again. This is, I think, hugely significant. One of the main backers of Education Nation is the Gates Foundation, which backs these policies across the country. And to be fair, it wasn’t just you. You weren’t the only lone grassroots voice there. There were other students who spoke out as well from that perspective. But do you think that we’re at a pivotal or historic moment in this country when it comes to public education?

HAGOPIAN: I really do. And I think that the size and strength of our movement and the numbers of parents, students, and teachers who are seeing through the corporate education reform myth, whose own experience over the course of over a decade of how these tests are used to rank, sort, label, and punish our children and our educators, has created a backlash and it’s created a mass movement. And those of us who have been organizing for years to say that education should be about much more than a single number, that the intellectual process of teaching and learning cannot be reduced to a single score, are beginning to have our voices amplified by this movement.

And I think that NBC realized that this movement had gained so much traction that it was impossible to deny it and have a credible conversation about education in this country. And I was so glad that I was able to raise the points on the show. The part of the show that was not shown in that clip, I was able to point out the fact that perhaps Garfield High School did not start the MAP test boycott. You could say that the boycott was actually started by the elite private schools like Lakeside, where Bill Gates attended as a high school student, because those elite schools, they have never given the MAP test and they don’t inundate their students with standardized testing, because they want their children to be raised to be the next generation of leaders. They want critical thinking in the classroom. They want time for the arts and the things that really enrich education. And we want the very same for all of our children in the public schools.

NOOR: Jesse Hagopian, thank you so much for joining us.

HAGOPIAN: I appreciate your time.