Not Just for Better Pay: Seattle Teachers Vote to Strike for Social Justice

Teacher Jesse Hagopian says Seattle educators will walk the picket lines beginning Wednesday, September 9 if their demands are not met.

Teacher Jesse Hagopian says Seattle educators will walk the picket lines beginning Wednesday, September 9 if their demands are not met. 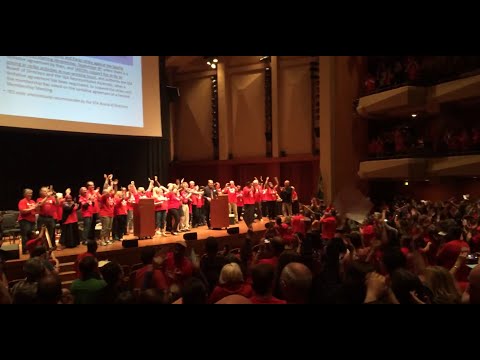 SPEAKER: SEA members, the motion has been put in front of you to call for a strike on September 9. All those in favor please signify by saying ‘Aye’.

All those in favor, state nay.

[No response, followed by cheering]

NOOR: This means students will not be attending class on Wednesday, the first scheduled day of school, if a deal is not reached before then. Negotiations with the school district are ongoing. The key issues of contention between Seattle Public Schools and the union include teacher pay, recess time for students, extending the school day, and what the union is calling too much standardized testing. The district services over 45,000 students in 97 schools.

Well, now joining us to discuss this from Seattle is Jesse Hagopian. Jesse is a Seattle public school teacher. He’s an editor of Rethinking Schools magazine, a founding member of Social Equality Educators. He’s the editor of the book More Than a Score, and he blogs at IAmanEducator.com. Thanks so much for joining us, Jesse.

JESSE HAGOPIAN, SEATTLE PUBLIC SCHOOL TEACHER: I really appreciate it. Thanks for having me back on the show.

NOOR: So this is a, what can be described as a historic moment in Seattle. I wanted to get your response from your superintendent, Larry Nyland. He says, we are eager to bargain with the SEA, your union, for a contract which honors and respects our educators and instructional staff in school. Absolutely critical to student success and closing the opportunity gap. He says he will continue to keep the public posted on what’s happening, and they want to get a deal settled as soon as possible. What’s your response to that?

HAGOPIAN: If he was so eager, his bargaining team would have been at the table before the last weeks of summer, before the last days ran out and school’s about to start. And what our bargaining team for the union has told us is that all summer long teachers were putting forward proposals to improve public education, and the district was silent. They not only didn’t respond to our proposals but didn’t put any proposals themselves forward until the last few days.

And then we sit down at the table with them, and the district flat out rejects every single one of our proposals to improve public education. And instead they put forward a plan where teachers work a half an hour longer for no extra pay. And it was that slap in the face and that disrespect that I think really garnered the unanimous vote. And it was just electric in the hall last night. People cheering and raising their fists, as all of us stood strong, arm-in-arm, saying we are going to fight for the schools that Seattle’s children deserve.

The issues that we’re taking up are much more than pay. Teachers and educational support staff deserve a living wage in a city where the costs are skyrocketing, where teachers can no longer afford to live in the city where they teach. So we’re definitely fighting for fair compensation. We’re fighting for an incredible list of educational reforms that will truly improve the lives of children in Seattle.

NOOR: And it seems the, among the demands that the union is making, they fall along the lines of racial and social justice. Has this always been the case in Seattle, and how did it get to this point?

HAGOPIAN: Well, it is truly an incredible list of demands that the union is putting forward. We’ve asked to expand recess. In some schools in Seattle the kids have 15 minutes or less of recess a day. Predominantly, schools that serve children of color and low-income schools have seen their recess disappear as our schools have been turned into test prep factories. And the union has also put forward a demand that every school in the Seattle Public Schools have a race and equity team. And that’s because the Seattle Public Schools have been shown by the federal government, by the Department of Education, to suspend black students at four times the rate of white students for the very same infractions. And those types of blatant institutional racism have to be checked. And the educators of Seattle have said, we want to form committees in every school to figure out how to address problems like those, and the district flat out rejected our proposal to fight for racial equality.

I think that this has been a long time coming. Our union hasn’t always put forward such a bold platform. I’m used to seeing our union ask for little and get less. But over the course of many years we’ve built up a caucus inside the union called the Social Equality Educators, and we’ve steadily argued that the only way students and teachers will be respected is if we build a powerful union that boldly asks for what we deserve and doesn’t back down.

NOOR: Jesse, I wanted to ask you–if you do go on strike on Wednesday, public support is going to be a key factor in how long that strike will be able to maintain itself. We saw that in Chicago. It seemed like the teachers there were getting lots of public support, and they’re able to stay on strike for more than a week there. What is the mood of the public? Will they stand with you? We know socialist council member Kshama Sawant released a statement saying if the district leaves union members no alternative but to strike, they will have the support of students’ parents and the community. They have stood up for young people tirelessly, and we will stand with them.

HAGOPIAN: Yes, I agree with Kshama. I think that absolutely the community is already showing their support for us. And this is the model that was built in Chicago that we are looking to of social movement unionism that fuses the power that we have as union members and as educators with the power of the community, the parents and community organizations.

And this is really what the Social Equality Educators have been arguing for for a long time. That we need to put forward demands in our contract that connect with what the parents and students are asking for. So the demand for 30-45 minutes of recess in every school is something that’s bringing parents out to our sides, and will bring them to the picket line once school starts. If we still don’t have a contract I think you’re going to see an outpouring of support from people who know that the city has become unaffordable as Amazon has come, has moved in and dominated our city, raising prices so that ordinary working people can’t afford to live here. And I think a lot of people identify with workers standing up and fighting back for the wages they deserve and for a school system that can serve all of our children in Seattle.

So I’m really proud of the work that my social justice educator colleagues have done over the years to help move the union in a direction that takes up the political demands that will help us achieve the contract that will improve public education.

NOOR: Well, I want to thank you so much for joining us.

HAGOPIAN: Thanks so much, Jaisal.

NOOR: And we’ll link to all your previous appearances on The Real News just below the story, including your interview with us about the historic boycott of the MAP standardized test in early 2014 along with your earlier and other appearances on the Real News. Thank you so much for joining us.

Links to other stories with Jesse Hagopian: