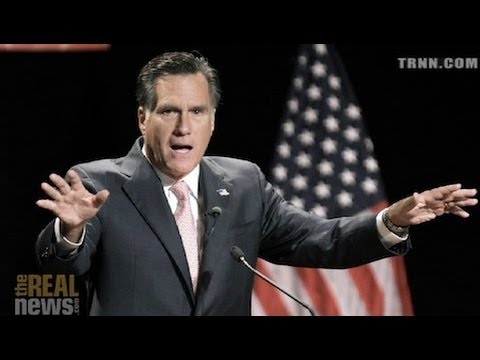 We’re continuing our series of interviews about the American governing elite and where they’re leading all of us. The U.S. presidential elections we’re focusing in on. And in this segment, we’re going to talk about Mitt Romney and the Republican Party with Jeff Faux, who now joins us from our studio in D.C. He’s a distinguished fellow at the Economic Policy Institute in Washington, D.C. He’s written extensively on the economy and neighborhood development and globalization. And his latest book is The Servant Economy: Where America’s Elite Is Sending the Middle Class. Thanks for joining us again, Jeff.

JAY: So, once again, if you haven’t watched the other parts, you should, ’cause we’re just going to pick up the discussion. In the last segment, we talked about President Obama’s vision. And nowâ€”or lack thereof or lack of implementing thereof. And now we’re going to talk about Mitt Romney and his economic vision. And I expect he would probably do a little better at implementing the vision he articulates then President Obama did. So kick us off with what Romney is saying and what you make of it.

FAUX: Well, you know, Romney, like his opponent, is saying what he thinks he needs to do to be reelected, but of course his basic proposition is dissolve the New Deal, bring us back to where we were sometime in the past, which is romanticized, where business decisions determine the future. I don’t think Romney is going to be quite as draconian as some of the people in the House of Representatives, but who knows?

You know, it’s not that you’re votingâ€”you’re really not voting so much for a person as you’re voting for a group. And in Romney’s case, the death of the liberal Republicans in the Republican Party means that all the people who are going to take the jobs in a Romney administration are going to come from the extreme right. And, you know, I wouldn’t be surprised if Romney turns his back on some of the most extreme cost-cutting, budget-cutting proposals of the Republican right. But it is going to be an age of super austerity. Presumably, Romney comes in with a Republican majority. It’s going to be, in a way, the George Bush economic program, which was to give away what wasâ€”what’s left of the government treasury to the business community. So it’s pretty reactionary.

Labor unions in particular are going to do a lot worse under Romney than they did under Obama. The Democrats are not against labor unions. They’re kind of for them. But they haven’t been doing much to help them, even though they depend on it. The Republicans, on the other hand, clearly are against the unions.

JAY: Alright. So Romney’s thesis is get the privateâ€”unfetter the private sector, stop all this money being tied up by governments, so the same amount of capital, supposedly, is now going to be available to the private sector to invest, and it’s going to be better for workers ’cause there’ll be more jobs and all of this. And so what is your sense of that? And how will ordinary workers with jobsâ€”and also those without jobsâ€”how will they do under all of this?

FAUX: Well, under Romney the lowering and the decline of real incomes and wages is going to be accelerated. I mean, the social safety net, which is very important to bolster workers’ bargaining position, is going to be lowered drastically; if not, it’s going to disappear. Unions are going to be under attack. I mean, they’re already under attack. And the Obama people can be helpful in specific kinds of instances. Without that, the trade unions are going to be up against the wall. And if you have four years or eight years of this kind of reactionary Republican regime, you can kiss trade unionism in America goodbye. Now, I happen to feel like in the long run unions are inevitable. They’ll come back. But it could be your grandchildren who will finally form the labor union after eight years of Romney.

It’s not likeâ€”the position of the United States is a lot more vulnerable than it was under George Bush. You know, we saw what happened under Bush. The crash of 2008, the crash of 2009 is an inevitable result of that kind of social Darwinist economics.

JAY: And what do you make of, you know, the section of the working class that should know better? And I don’t mean necessarily workers in small towns and rural areas that traditionally have, you know, been a little more Republican for various reasons, but there seems to be some inroads being made in the urban working class, which should know better and are stillâ€”there’s sections seem to be considering voting for Romney. And, you know, some of these votes are so close between Obama and Romney that it kind of boggles my mind what is going through the heads of these people. As much as I’m critical of Obama, like you’ve mentioned, Romney will be a disaster. And what is going through theâ€”why is Romney having some success with these people?

FAUX: Yeah. Well, we’ll see how much success he has. But I think to the degree that he has, it’s, one, because peopleâ€”the working class in urban areas has not seen the recovery, has not seen the improvements. Wages have declined, and we still have high unemployment among all segments of the working class, which is 80Â percent of our population, so that they haven’t seen that.

But there’s something else going on, I think, in among the average American voter, and that is there’s some denial. If you askâ€”the polls have shown, if you ask the average American, do you think the next generation is going to be worse off than this generation, you get overwhelming majorities yes. But then if you ask, do you think you personally are going to be worse off, the answer is, oh, I’m going to be okay, my kids are going to be okay. There’s a disconnect that’s going on, and I think in part it’s because they haven’t been inspired by anything political, and they’re sort of coming back and internalizing all of this and hoping that whatever happens, they’re going to be okay. This is a common psychological, you know, problem of denial.

JAY: They also seem to have had some success in getting sections of private sector workers in on blaming public sector workers, and then that also has electorial implications.

FAUX: Yes. Jay Gould, who was the robber baron of the late 19th century, once said he could pay half of the working class to kill the other half of the working class. Now, I don’t think that’s quite true, but there is aâ€”the sophisticated Republican conservative program that we know has beenâ€”being operated since that famous memo of Lewis Powell to the Chamber of Commerce in the early 1970s, the propaganda about the world which pits private sector employees against public sector employees and have asâ€”trade unionists in New York, for example, backing cuts to pensions for public workers. That’s what happens. When you undercut the trade union movement, you isolate it and fragment it, you get internal conflict.

JAY: There’s another part of it, is there not, that as well, President Obama and the leading Democrats, you know, they fight somewhat in defense of this idea of government and public sector, and in the campaigns there’s some of that kind of language used. But during this last four years, the Democratsâ€”certainly under Clinton, tooâ€”they buy into some of the underlying assumptions that they actually share with the Republicans, which gives it a kind of credibility. And then what are people left with? Then it’s just, okay, I like this guy or that guy, you failed, let’s try him. I mean, nobody has any ideological moorings anymore.

FAUX: Right. I think one of the great tragedies and failures of the Democratic Party is that ever since Clintonâ€”and, quite frankly, even at the end of the Carter administration they bought into the propaganda campaign against government. And so you have Obama repeatedly saying, well, we’re not for big government. You got the disaster of that health care plan, when you and I and most Americans know that the only way to deliver health care and get those insurance costs down and the prescription drug costs down is to have a single-payer program for this country. That’s clear. And if Barack Obama and you and I were sitting in a bar, I believe that’s what he would tell us. Instead, in order to avoid the big government issue and not confront it and not deal with it, instead they develop this sort of Clintonesque, complicated piece of legislation that no one can understand, and it becomes terribly, terribly vulnerable.

This is a big country. We have big problems. We need big government to solve them. The idea that we could solve these problems that face the American middle class with a government the size of Honduras’s is insane. And yet that is the ideology that the Democrats themselves keep reinforcing.

Anyway, we’re going to continue this discussion. Thereâ€”not right away, but Jeff is going to come back soon, and we’re going to pick up another series of talks. We’re also going to, if Jeff agreesâ€”and I think if I do this while we’re live, he’s going to agreeâ€”he’ll come back for maybe some live Q&A with viewers.

JAY: Okay. So we’llâ€”maybe the next time you come in, we’ll let everybody know, and we’ll take people’s questions, and we’ll make that part of format.