Obama and the "March of Folly"

Jeff Faux Pt3: Obama understands what needs to be done but like the Republicans, he responds to the needs of big money

Jeff Faux Pt3: Obama understands what needs to be done but like the Republicans, he responds to the needs of big money 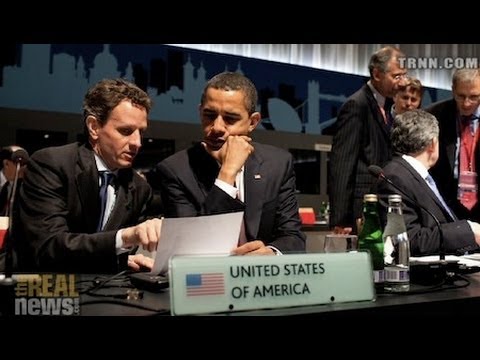 We’re continuing our series of discussions about where the American governing elite is leading us all. Now joining us from our D.C. studio is Jeff Faux. He’s the founder and now distinguished fellow of the Economic Policy Institute in Washington, D.C., an activist, economist, a writer. His latest book is The Servant Economy: Where America’s Elite Is Sending the Middle Class. Thanks for joining us again, Jeff.

JAY: So if you haven’t watched part one or part two, then you should, because we’re going to just pick up the discussion from where we left off. So first we’re going to talk about the U.S. presidential elections. We’ll start with President Obama. If we need another segment, then we’ll do Romney. Or we’ll fit them both in here. We’ll see how it goes.

But let’s just start from this. When President Obama ran in 2008, he seemed to understand what a rational economic policy would be in order not to kind of continue this spiral of lack of demand, low wages, no infrastructure, and so on. And now, four years later, there’s still some of that rhetoric, but I don’t think we saw a heck of a lot of it. We saw him make a commitment to the Employee Free Choice Act, EFCA, that would allow more unionization, which in theory would have led to higher wages. And they gave up on that, it seems to me, from day of the inauguration. Anyway, so let’s talk about President Obama’s vision and actual practice in terms of where this economy’s going.

FAUX: Yeah, I agree that when he ran and in the initial few months of his term he did seem to understand it, and I have to give him the benefit of the doubt and assume he did. And he was often quite eloquent about it. I thought in his inaugural speech, when he used that biblical quotationâ€”he said, now we must put away childish thingsâ€”I thought that was a brilliant image. And after that he kept talking about we need toâ€”we can’t rebuild the economy on a pile of sand; we need to build it on a foundation of rock, etc. And he, I think, or at least some of the people around him, if you had a few beers and the press wasn’t there, would admit that they know what to do. And knowing what to do is investing in infrastructure and education and research and development; it’s having a trade and investment policy that’s aimed at the interests of the American worker, not the American foreign investor; shrinking Wall Street. All of this stuff, you know, they know has been written a number of times. I’ve written a couple of books on this myself. By now it’s clear what we need to do.

But Obama gets in, and suddenly the world of the elite, financial elite especially, closes in. He picks the advisers who were part of the Clinton teamâ€”Summers and Geithner, who’s a Wall Streetâ€”they’re all Wall Street people. So if you put these people in charge of the economy, it is no surprise that you’re going to get what we got, which was subsidies and a lifeboat for Wall Street, and drowning for a whole lot of other Americans.

JAY: Right. I mean, you’d have to think this is mostly campaign rhetoric, then. It’s not like he didn’t know what Wall Street wanted. To a large extent his candidacy began on Wall Street. These guys were raising money for him on Wall Street years ahead of time, and he knew how much of his campaign depended on that. And clearly he’s hearingâ€”and you can see from the team he appointed it was theâ€”you know, as you said, it was the Wall Street economic team. So it makes you think this is all justâ€”you know, it’s not like he doesn’t know, but he uses it to campaign, not to govern.

FAUX: Yeah, yeah. I wasâ€”if I can say this, I was inspired to write this book by a book that the American historian Barbara Tuchman wrote in 1984. It was called The March of Folly. And it’s a sort of a history of political folly over the last 2000 years. And she defines folly as not stupidity, but looking at the evidence, knowing what is the right thing to do, and going ahead and doing what you wanted to do anyway, and to the result with the destruction of your institution, your country, etc.

FAUX: That’sâ€”exactly. So this is something that we see in history. It’s got a historic context.

So Obama, in my view, is Clinton II. I mean, we saw it for eight years in Bill Clinton, the rhetoric, the "I feel your pain," a little populism, a better program than the Republicans (there’s no question about that), but not enough to solve the problem of the average American working family. With Obama it is the same.

And, you know, you can make the caseâ€”and I think it’s rightâ€”that Romney and the Republican right would be a complete disaster. So it’s a defensive decision here, voting for Obama to avoid something worse.

JAY: Which is what the fundamental, primary mission was, to get reelected.

FAUX: That’s right. That’s right. And, you know, you can sort of step back and say the Republican Party wants to drag us back to the 19th century, the Democratic Party at its best wants to keep the gains that were made in the 20th century. But neither of them are seriously looking at what this country needs to do in order to be prosperous and survive and have the middle class survive in the 21st century.

As I said before, we abandoned future in our politics back in the Reagan years, and we haven’t put it back together. Now, where is the vision? Now, peopleâ€”you know, that’s a misused word. But, again, back in the 1970s, people were thinking about what America should look like 20 years from now. You know, there’s an old saying that if you don’t know where you’re going, any road will get you there. Well, any road is getting us where we’re going, because there’s no sense of what this country should be like 20 years from now.

JAY: Except there is a vision, in a sense, I think you could say, both developed in European elite and the American elite and Canadian elite, which is what’s happening. The vision is: we don’t need to giveâ€”we don’t need a compromiseâ€”the New Deal compromise anymore because we have so much pressure and leverage against European and North American workers now that the vision is what we’re seeing. We can have a low-wage economy. We’re going to still make a killing because there’s so much money to be made in the rest of the world. And that’s the vision.

FAUX: Yeah. There is noâ€”there’s nothing after the day after tomorrow, because, as I said before, they really do not see that as their job or their interest. What they see is the opportunity to get quickâ€”and quick is very, very importantâ€”to get quick returns now. What happens five years from now, ten years from now, they’re gone. You know, they’re in the south of France. They’re going to be doing what the rich and powerful always do [crosstalk]

JAY: Okay. Let me just go back to one point, ’cause we spend a lot of time on The Real News Network being very, very critical of the Obama administration. And, of course, we’re very critical of Romney and the Republicans. But you made a point, and I don’t think we explore that point enough on The Real News, which is that you said the Democrats are a little better, that the Republicans will be a complete disaster. So in terms of the Democrats being a little better, what are some examples of that?

And let me just add one thing, which is partly a comment and a question. I guess it’s in the interests of that section of the American elite whose electoral alliance is based on unions and urban workersâ€”they got to do something or they lose their base, where the Republican allies in the population or the right wing of the working class, rural people and such, they don’t have to do the same things to get elected. So it’s within that section of the American elites’ interest to do something. And so what’s the something that makes them a little better?

But on the economic question, you ask yourselfâ€”when Obama got elected, you could’ve asked him just that same question: well, what are you going to do for the people who elected you, so that four years later they will be enthusiastic about you? And the answer was to ignore that. In a way, the Republicans are more attentive to their working-class supporters, that is, the people who care about gay rights and guns and things of that sort, than the Democrats are. There is no excuse forâ€”and there’s no political logic for a Democratic Party that depends so much on trade unions to have stiffed them the way Clinton did and stiffed them, as you just mentioned, the way Obama did.

So you’re asking yourself: so who is it that they’re responsive to? And they’re clearly responsive to the money. And money inâ€”the big money in politics is nowâ€”I don’t have to tell your listenersâ€”is now rampant. We were at the edge of a plutocracy perhaps a few years ago. Now we are in it. And, you know, money doesn’tâ€”is not the total answer here, but it is most of the answer. So the Democratic Party comes out at election time and rolls out the populism, but the people who are bankrolling themâ€”and labor can’t match business anymoreâ€”the people who are bankrolling them and the people who will get the jobs as assistant secretaries and undersecretaries and secretaries all are coming from the big-money sector.

JAY: Okay. Next segment of the interview, we’re going to talk about Mitt Romney and the Republican bid for the presidency. Please join us for the next segment of this series of interviews on The Real News Network.