The Debate: Why Didn’t Obama Attack the Bush Years?

Jeff Faux: The similarity of positions and Obama's refusal to explain the real causes of the crisis gave the debate to Romney

Jeff Faux: The similarity of positions and Obama's refusal to explain the real causes of the crisis gave the debate to Romney 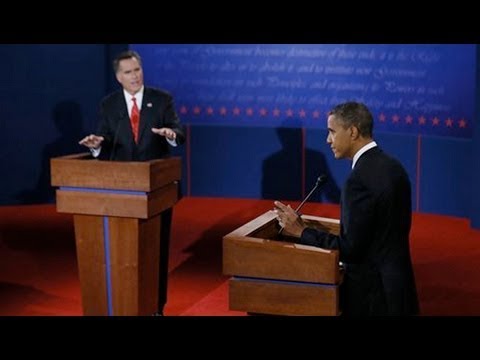 And last night, President Obama and Mitt Romney met for the first presidential debate. And now joining us with his take on the debate is Jeff Faux. He’s the founder and now distinguished fellow of the Economic Policy Institute in Washington. His latest book is The Servant Economy: Where America’s Elite Is Sending the Middle Class. Thanks for joining us.

FAUX: Well, you know, in a sense, Romney, being behind, had to do better than the president. I think he did. He was aggressive right from the beginning, right from the first bell. He went after his own image as a rich kid, and he kept insistingâ€”lying, you have to sayâ€”that he wasn’t for cutting taxes on the rich, that he was in favor of saving Medicare. He had this number about $716 billion that he accused Obama of taking out of Medicare, when this whole business was forced on Obama by the Republicans. So Romney was essentially recreating himself, moving to the middle, after having, you know, captured the Republican nomination from the right.

JAY: Right. I mean, I joked in another interview that my headline for the debate was "Brilliant Liar Defeats Man without Convictions".

FAUX: Yeah, well, that’s certainly how the president came over. Obama was passive. I think Obama’s big mistake, you know, forgetting for a moment about the styleâ€”but I think his biggest mistake was that he didn’t explain how we got into this situation. You know, he let Romney rake him over the coals, which he should have expected, on unemployment and on mortgage foreclosures and, you know, all of that stuff. He let Romney say jobs, jobs, jobs about seventeen times. But he never said, lookâ€”he said he inherited the problem, but he never said, it was your party that created the problem, it was your party that led us, you know, down this track, and it was the deregulation of Wall Street. Actually, I was amazed Romney was the first one who mentioned Wall Street, and he mentioned it in the spirit of criticizing too big to fail. So, you know, the president really did let him loose.

I thought Romney overdid it. I thought he began to look a little manic after about half of the show, and his mannerisms started to fall apart, and the president looked more presidential. But Romney hammered him away, hammered away on the economy, and the president kept coming back to Romney’s tax plan. And I have to tell you, I think he lost 75 percent of the audience on that one.

But when, you know, you step back and you look at this, Paul, what’s clear is that neither of these guys have a plan or a vision for the future. You know, there’s no sense for the average working person looking at this show, looking at this debate, about where they would be four years from now. And I thinkâ€”you know, I don’t think the president lost a lot of ground, but here was an opportunity, you know, to really make the case thatâ€”for the things that he says he hasn’t done over the last four years, like public investment and about creating jobs and making those investments in the future. But he just stalled, and I just think it was a lost opportunity.

JAY: Well, that’s why I say man without conviction, because if he spokeâ€”if he actually had convictions about these values and these concepts that he campaigned on four years ago and didn’t push very hard for, you know, he could have used this as an opportunity to explain why the crisis is and what needs to be done about it. But that’s not who he is.

FAUX: Yeah. Well, I think we’ve learnedâ€”we’ve relearned that. You know, Romney was in many ways a complete phony, because what he was saying tonight was 180 degrees as what he’d been saying for the last year.

JAY: Well, maybe Obama’s not so against it.

JAY: Alright. Thanks very much for joining us, Jeff.

FAUX: Okay, Paul. Good to be with you.