TRNN's Jessica Desvarieux reports on how Puerto Rico's tax policy exempts billions of big pharmaceutical companies' profits, leaving at least $15 billion out of the revenue stream while the country wallows in debt.

TRNN's Jessica Desvarieux reports on how Puerto Rico's tax policy exempts billions of big pharmaceutical companies' profits, leaving at least $15 billion out of the revenue stream while the country wallows in debt.

How Tax Dodging Put Puerto Rico on the Road to Debt 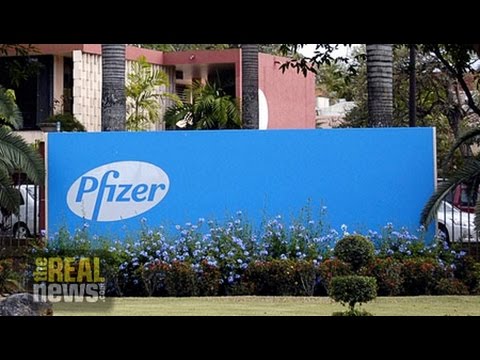 JESSICA DESVARIEUX, PRODUCER, TRNN: From a bird’s-eye view, you would think that you were looking at the cityscape of Miami. But in reality, this is Puerto Rico. It has all the dressings of being in the United States. A powerball lottery system. The highest concentration of Wal-Mart stores per square mile. And its residents are all American citizens.

But Puerto Rico is not a state. It’s known as an unincorporated United States territory, meaning it is not on a guaranteed path to statehood. And although Puerto Ricans serve in the U.S. military, they do not have the right to vote for their commander in chief in presidential elections. Now with a population of 3.6 million people, it has more than $73 billion in debt and its governor has declared it unpayable. Currently, the island is paying close to $3.7 billion a year just to service the debt.

But before we can ask what to do about this crisis we wanted to understand, how did Puerto Rico rack up so much debt in the first place?

The Real News spoke with Puerto Rico’s sole member of Congress, Pedro Pierluisi. As resident commissioner, Pierluisi does not get to vote, but he’s still fighting what he calls Puerto Rico’s second-class status when it comes to receiving federal funds.

PEDRO PIERLUISI, PUERTO RICO RESIDENT COMMISSIONER: We have a health insurance card system for the medically indigent. But Puerto Rico’s pretty much covering more than half of its cost under the Medicaid program. If Puerto Rico were a state or were treated like a state in that program, the federal government would be assuming about 80 percent of the cost. You’re talking about, easy, $1.5 [billion] dollars that Puerto Rico is now spending to deal with people who fall below poverty level, in helping them address their health needs, that Puerto Rico wouldn’t have to spend.

DESVARIEUX: But beyond what the government is spending, what about the taxes that it’s collecting? The major shift in Puerto Rico’s tax code began in the 1940s when American corporations operating in Puerto Rico were given special status, allowing them to be exempt of both Puerto Rican taxes and federal taxes. Most recently, beginning in 1976, Section 936 Tax Code granted U.S. corporations a tax exemption on both Puerto Rican and federal taxes. It allowed them to pay nothing on profits that reached in the billions.

The idea was that it would attract business to the island, and it worked. Big pharmaceutical manufacturers like Pfizer and Merck came in droves.

PIERLUISI: If there’s not a large number of the population paying taxes, or at least getting the kinds of wages that would allow them to pay taxes, then the deficits in the 1980s began to grow in Puerto Rico. And in fact, after 1970s the convergence–in other words, the growing together of salaries in Puerto Rico and the United States began to separate. In other words, they began to go down. Even lower than [inaud.] than the poorest state in the United States, which is Mississippi.

DESVARIEUX: California State University Latino Studies professor Victor Rodriguez explains that since the 1970s Puerto Rico began to rely on debt to pay for basic public services and to pay for previous debt. Due to these extensive tax credits and exemptions, Puerto Rico lost $250-500 million a year in revenue according to a recent report by former chief economists of the World Bank.

The IRS also conducted its own investigation of the program. Back in the ’90s the Government Accountability Office found that this tax exemption did not provide the level of employment that was expected, and the tax code was phased out in 2006. Just based on that tax code, the island lost up to $15 billion in tax revenue.

Back in the ’90s many Republicans in Congress predicted the end of tax incentives would mean a shrinking of business in Puerto Rico. And it did happen, but mainly because companies were consolidating due to mergers, and many of the companies that stayed still do not pay local and federal taxes. For example, the world’s biggest maker of heart rhythmic devices, Medtronic, manufactures its products in Puerto Rico. But through a tax loophole it’s able to credit the $16 billion of income to a mailbox in the Cayman Islands, leaving billions of profits in these tax havens.

Puerto Rico is also trying to encourage the wealthy to become residents. Currently Act 20 and Act 22 exempt residents from paying taxes on capital gains and real estate acquisitions. According to Pierluisi, 500 individuals have taken advantage of the tax break.

PIERLUISI: Why do we do this? Because we’re trying to grow. The underlying problem in Puerto Rico is lack of growth. And as a territory the only tool you have is the fact that we have our own tax system in Puerto Rico. But it’s not good enough, I tell you. It hasn’t worked. It hasn’t worked now for too long. We need to change the model, we need to change the platform.

DESVARIEUX: Rodriguez agrees that a change is needed since these individuals do not stimulate the economy.

VICTOR RODRIGUEZ, CALIFORNIA STATE UNIVERSITY LONG BEACH: What really moves an economy is when the middle class and the working class have money to buy stuff. How many cars can a millionaire buy? Maybe one, two, three, thirty. But how many cars can a million people buy? So obviously it’s more important to have a middle class and a working class that gets good wages than having 300–I think they’ve been able to attract 300 millionaires who basically [set up] their residence in Puerto Rico. So I don’t think that’s going to solve anything.

DESVARIEUX: But what is going to solve Puerto Rico’s financial woes? Tax reform is being heavily discussed as Puerto Rico meets with its creditors this week. Back in March, Puerto Rico’s governor signed into a law increasing the U.S. territory’s sales tax from 7 percent to 11.5 percent.

But will this get to the root issue of changing the economy to work for the majority of Puerto Ricans? In part two of our series we’ll explore that question, and short-term and long-term solutions. Much is on the line, for Puerto Rico could legally be forced to pay creditors before paying state employees or benefits, like Medicare for residents. And with at least 40 percent of the population living below the poverty line it’s a reality the country can’t afford.