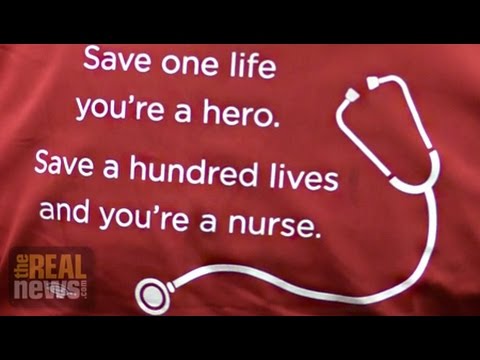 JESSICA DESVARIEUX, TRNN PRODUCER: On Capitol Hill, there’s growing buzz that a bill granting fast-track authority for the Trans-Pacific Partnership, or TPP, could be up for a vote next week. The TPP involves 40 percent of the global economy. And if this bill moves forward, Congress would be allowed to pass it with a simple up or down vote, with no debate.

But that’s not going over very well with the nurses representing the union National Nurses United. They gathered in Washington, D.C., on Thursday with one simple message for members of Congress.

JEAN ROSS, COPRESIDENT, NATIONAL NURSES UNITED: Well, we want Congress to not abdicate its responsibility. Right now, if you look at this, what you know of it–and we know very little, because it’s negotiated in secret, right? Corporations have input. They’re basically writing a law for the people. The corporations are writing it. So the few people from Congress that have seen it, that’s one thing. You’re not supposed to abdicate your responsibility for debating, for amending, for asking what you should be asking: how does it affect the public that I represent? That’s what we expect them to do. And fast track is a way of totally abdicating that responsibility. It just says yes or no. You might even be able to see it in front of you, the many, many, many pages of it. There’s 29 chapters, and only five of them deal with trade. So their specious argument about you shouldn’t be against free trade–we’re not against trade. Trade has to happen. But we care how it’s done and how it affects us.

DESVARIEUX: How the TPP will affect everyday people is still largely unknown, which is why some members of Congress, like Connecticut Democratic representative Rosa DeLauro, says that transparency must be demanded by the public.

ROSA DELAURO, U.S. REPRESENTATIVE (D-CT-3): –as [incompr.] as taxpayers, as the American public have a right to have more member of Congress have input into a process that has wide-ranging effects on every aspect of our lives. That’s simply what we are asking for.

DESVARIEUX: But not all members of the Democratic Party are as vocal. Ranking member of the Senate Finance Committee Ron Wyden is joining Republicans who will be pushing for fast-track authority. Currently, lawmakers can request to see chapters of the text being negotiated but are not allowed to bring aides. Also, the text has not been released to the public. What is known about the TPP deal is through documents leaked to WikiLeaks. One of those chapters released is the health care annex, which would affect medicine prices.

DEBORAH BURGER, COPRESIDENT, NATIONAL NURSES UNITED: –the everyday life of nurses providing health care and nursing care to our patients. I’m sure you’ve heard many people talk about the expansion of the protections for brand-name drugs from, quote, eight years up to 12 years. And who knows? It might even go up to 20. Canada already has an eight-year limit on brand names. This is going to change that.

BEVERLY VANBUREN, NATIONAL NURSES UNITED: A patient that had a transplant that ended up going back on dialysis because that patient cannot afford medication to keep the transplanted organ alive, survival. And now, after thousands and thousands of dollars we spent transplanting this organ, this poor person is back on dialysis.

DESVARIEUX: Another major issue with the TPP deal is how it handles legal matters. It creates extrajudicial tribunals outside of a country’s legal system. Critics say this will undermine a country’s legal system, placing corporations’ ambitions over people, something Nurse Burger says has happened with past free trade agreements, like the North American Free Trade Agreement, known as NAFTA.

If you look at the Trans-Pacific Partnership agreement, that is NAFTA on steroids. It gives a star chamber–three lawyers that have a conflict of interest in deciding whether a corporation wins or loses their lawsuit against a certain state.

But it’s not a two-way street. In laws, you can go to a court and actually appeal a decision. In this process, under the Trans-Pacific Partnership agreement, there is a star chamber with three lawyers that get paid $700 an hour to make a decision by the courts in that group, and their decision is final and binding on all signatories to the treaty.

DESVARIEUX: The TPP is still not final, and nurses from the National Nurses United are pressuring members of Congress to reject a fast-track proposal, something they say they will remember next election cycle.

ROSS: You know, if you don’t do the will of the people, the real people, and not corporation, which is a thing, not a person, then yes, we do need to look at that, because you need to start listening to what we’re saying and how it’s affecting us.