After the GAO finds $11 billion in disability payment fraud, some members of Congress push for privatization to solve a problem which accounts for only one fifth of one percent of cases, says CEPR's Nicole Woo.

After the GAO finds $11 billion in disability payment fraud, some members of Congress push for privatization to solve a problem which accounts for only one fifth of one percent of cases, says CEPR's Nicole Woo. 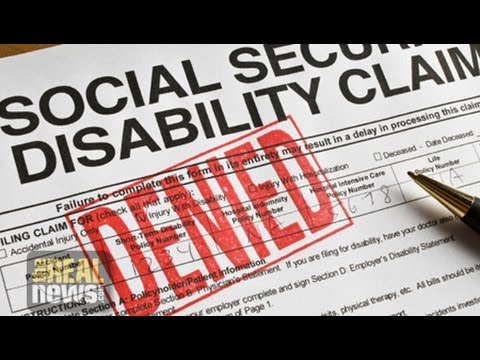 JESSICA DESVARIEUX, PRODUCER, TRNN: The headlines seem to say it all. The Government Accountability Office found that disabled workers were overpaid $11 billion in the past nine years. The investigation found that disabled workers were double-dipping by receiving an unemployment cheque as well as a disability cheque. Congress took notice, orchestrating a special House and Senate joint economic committee on Wednesday to hear testimony on how to reform disability insurance. Some members were calling for privatization.

SEN. MIKE LEE (R-UT): I think it’s important to talk about other reforms to SSDI but I do want to highlight the fact that private group long-term disability insurance, according to one study, already saves federal programs $2 billion a year. And so I think this is an area that’s very much ripe for exploration.

DESVARIEUX: But on closer examination, Center for Policy Research Domestic Policy Director Nicole Woo says that the $11 billion in abuse does not tell the entire story.

NICOLE WOO: If you do all the numbers, you come out with maybe one-fifth of 1 percent of inaccurate payments. That means that Social Security Disability is 99.8-99.9 percent accurate.

DESVARIEUX: Social Security Disability Insurance, or SSDI, operates on $140 billion a year, and reaches 9 million Americans who have a significant illness or impairment. The way the program works is that each worker pays a premium out of their paycheck in payroll taxes. Then it is matched by their employer. So if you become disabled, you are supposed to have a safety net. The program was on the road to running out of tax revenue to pay all of its recipients in full until the budget deal was passed last month. Republicans argue that SSDI faces budget problems because the percentage of working-age SSDI recipients has steadily increased over the past 30 years due to false claims, and people remaining on the program indefinitely.

But Woo says when you look at the increasing number of aging baby boomers and other factors, a rise in the numbers is understandable.

WOO: One is that more women are in the workforce now than they were maybe three decades ago. That means more women are qualified for Social Security Disability payments, because only people that have a strong work history can even qualify to get these payments if they become disabled. There is also the aging of the baby boomer generation. As people get older, they’re more likely to be disabled. So we’re seeing that generation just sort of age into more disability payments.

And one thing to remember about the baby boomers is that they are not going to go on forever. The rises have happened, but the projections are that the program will level off in the future. And one other point that some of my colleagues have come up with in a research paper recently is that there have been state-level cuts to the workers’ compensation program. Workers’ compensation is for people who were injured on the job. Because of these cuts in the state-level workers’ comp programs we found that about one-fifth of the rise in disability payments is due to the fact that fewer workers can get workers’ comp.

DESVARIEUX: Now after the two-year budget deal has passed, the program will be entering a new phase. SSDI recipients will see stronger penalties for abuse, stronger oversight, and more stringent reporting requirements. But testifying before Congress, Center for American Progress’ director of policy for Poverty to Prosperity program Rebecca Vallas says the program requirements are already stringent, with two in three applicants being denied.

REBECCA VALLAS: The vast majority of applicants are denied under this strict standard. And those who qualify often have multiple serious impairments. Many are terminally ill. And one in five beneficiaries die within five years of receiving benefits.

Most beneficiaries live with such debilitating impairments and health conditions that they are unable to work at all, and even denied applicants exhibit extremely low work capacity after being denied, reflecting the strictness of DI’s eligibility criteria.

DESVARIEUX: And once workers meet the criteria, Woo says that the average benefit is about $300 a week, which places many barely above the federal poverty line. Woo says real reform to reduce response times and provide benefits more proportional with people’s income prior to making their claim would require reforming the payroll tax system.

WOO: And that means more and more of the payroll taxes that would have been collected have escaped. Because only the first $118,500 in people’s annual wages are taxed by Social Security. Most people don’t know that because most of us make under $118,500. But you know, a millionaire is still paying the same amount in taxes as somebody who’s making $118,500. So that’s another way that the trust funds could be replenished, is by making the wealthier people, the people who are making more money, pay the same rate as the rest of us.

Nicole Woo is the Director of Domestic Policy at the Center for Economic and Policy Research. She covers a broad range of U.S. economic policy areas including labor markets, financial reform, federal budgets, and social insurance.