CIA whistleblower Jeffrey Sterling's wife, Holly Sterling, breaks her silence and says her husband was wrongly convicted under the Espionage Act after going through government channels to blow the whistle

CIA whistleblower Jeffrey Sterling's wife, Holly Sterling, breaks her silence and says her husband was wrongly convicted under the Espionage Act after going through government channels to blow the whistle 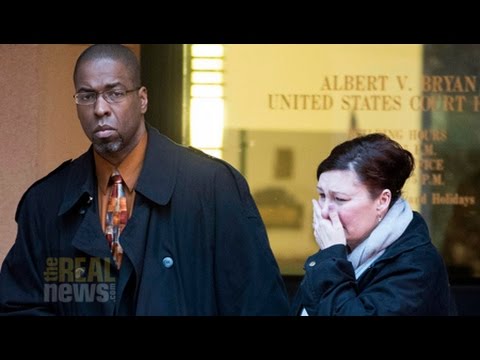 JESSICA DESVARIEUX, PRODUCER, TRNN: Welcome to the Real News Network. I’m Jessica Desvarieux outside the National Press Building, where we sat down with Holly Sterling. She is the wife of CIA whistleblower Jeffrey Sterling, who allegedly leaked classified information to New York Times reporter James Risen. But today Holly Sterling is breaking her silence.

HOLLY STERLING: I came to DC today to discuss Jeffrey’s case, to really just let the public know of the tragedy that Jeffrey’s endured for approximately over ten years. That Jeffrey was innocent, he was wrongly convicted. And mainly because I wrote a letter to ask the President to immediately pardon Jeffrey.

DESVARIEUX: And when you say he was wrongly convicted, can you go into that a little bit more?

STERLING: Yes. Jeffrey formerly worked for the CIA, and he actually was the first African-American case officer to file a racial discrimination suit against the CIA, approximately in 2000. The case was actually dismissed in 2005 due to state secret privilege, saying that he could not go forward with this case because he would have to disclose classified information in order to prove his racial discrimination case.

So actually, Jeffrey had a relationship with James Risen previously, that he had made public knowledge of.

STERLING: Yes. And he was covering the discrimination case of Jeffrey. So we’ve always divulged that there was a relationship there. Then Jeffrey was fired from the CIA, and Mr. Risen’s book came out. And they pointed the finger at Jeffrey, stating that he was a former disgruntled CIA employee that wanted to get back at the CIA.

[Jeffrey] went through the proper channels, and now he’s in prison. So I think it’s difficult, because even if you go through the proper channels there’s still going to be repercussions. The government wants to keep secrets, doesn’t want the public to know, really, what’s going on. Especially my letter with President Obama. He said he was going to be the most transparent president ever, and that’s not happened. It’s been shrouded in secrecy.

Yes, we are–we are definitely appealing. Because like I said, Jeffrey is innocent. So the, you know, the lawyers are just reading background information, trying to get started, to get briefs. Just that Jeffrey’s not the disgruntled former CIA person that the prosecution described him as. Actually he feels really bad that he was fired from the CIA. He really, truly believed in serving his country, doing what was right. But unfortunately with that, you know, he felt that people in our country were going to be endangered, and he needed to step up and go forward with that.