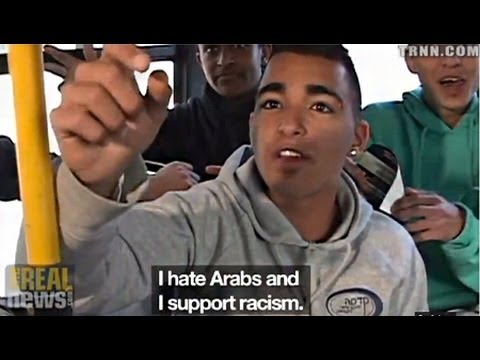 LIA TARACHANSKY, PRODUCER, TRNN: Thursday, March 21, marked the International Day for the Elimination of Racial Discrimination. On this day in South Africa in 1960, police opened fire and killed 69 people at a peaceful demonstration in what became known as the Sharpeville massacre.

It was on this day the U.S. President Barack Obama spoke in Jerusalem during his visit. He did not address the significance of the day, despite a visible increase in recent years in discrimination against minorities in Israel. He instead focused on the threat to the ethnic purity of the country if the two-state solution is not realized.

BARACK OBAMA, U.S. PRESIDENT: Given the demographics west of the Jordan River, the only way for Israel to endure and thrive as a Jewish and democratic state is through the realization of an independent and viable Palestine. That is true.

Many used the opportunity to draw comparisons between discriminatory policies in Israel and in South Africa or the American South under Jim Crow. Writing in the Huffington Post, Rena Zuabi says: Today, a country that professes to be the only democracy in the Middle East has announced the creation of segregated bus transportation in the West Bank. . . . What for many is both ludicrous and an outdated form of segregation is for us the reality of one of the many policies Israel employs to disenfranchise Palestinians.

In recent years, the number of hate crimes in Israel has nearly doubled, according to the annual report on racism. Such attacks have especially spiked this year, with the report showing increases in discriminatory attacks and incitement to racism against migrant workers, African refugees, and various Jewish sectors, and above all against Arab and Muslim people.

While most such attacks go unreported, some do receive media attention. At the end of February, a group of religious Jewish women attacked and tore off the head scarf of a Palestinian woman waiting for a city train. A day earlier, a mob of angry teenagers attacked a Palestinian street cleaner in Tel Aviv, yelling Arab at him. They beat him over the head with a bottle, causing severe damage to his eye.

UNIDENTIFIED (SUBTITLED TRANSL.): I saw him here, lying on the ground. Fifteen or 20 kids–I don’t know, they were young–kicking, throwing, breaking, yelling at him. And he’s on the ground, bleeding to death. It’s a lynch.

TARACHANSKY: A month earlier, half a dozen attacks were recorded against the offices and leaders of the Beitar soccer team for recruiting two Muslim players. At one game, fans unraveled a banner reading, “Beitar must remain pure forever”.

NEWS PRESENTER (SUBTITLED TRANSL.): Following the arson of the Beitar soccer team’s office, today we bring you the accused men’s confessions, where they admit they did it because of the new Muslim players.

VOICEOVER (SUBTITLED TRANSL.): (Investigator) Why does it bother you if there are Muslim players on the team? (Joseph) I want a Jewish team that plays with one heart. I don’t hate foreigners. I want the players to love the Menora [state symbols] and not play for money.

Racism as a motivation came up at all the investigations. Their feeling was that all lines were crossed and it was impossible to do nothing.

(Investigator) Is the decision to recruit them what hurts Beitar’s fans? (Navon) Yes. (Investigator) Why? (Navon) I don’t know why. It’s like that. We grew up on these values. This is what we were taught.

TARACHANSKY: Thair Abu-Rass, whose organization works to advocate civic equality in Israel, says the incitement and violence are a product of Israel’s discriminatory legal and planning systems.

THAIR ABU-RASS, ASSOC. FOR ADVANCEMENT OF CIVIC EQUALITY: Look at it this way. If you’re an eight- or nine-year-old kid, a eight- or nine-year-old Jewish kid in Israel, and you see day-in, day-out, whether it’s through the different media outlets in Israel, whether it’s by the political leaders, beginning from the prime minister and all the way down, or by your own community leaders, whether it’s in your own synagogue or in your own community center, this kind of treatment towards the Arabs, denigrating the Arab minority in Israel, looking at them as the other, as the enemy that you should always be careful of, when you internalize these kinds of feelings, it only becomes normal.

TARACHANSKY: Following the growing number of incidents of racial and religious violence, the ministry of education this year ordered students across the country to address the subject with students. But street-level racism is only the symptom of the problem, according to the coalition against racism in Israel. Its report showed incitement to hate by public figures has nearly doubled in the past year.

ABU-RASS: When it comes to budget distributions, or when it comes to introducing new laws to the country, it makes a difference whether you’re Arab or Jewish. If we take the last parliament, the last Knesset session, for example, which was the 18th Knesset, which was considered to be one of the most racist and anti-democratic parliaments, there were many legislative bills that most of them did not go through out of fear of more Israeli isolation, but the fact that they were introduced scares many, you know.

ABU-RASS: For example, MK Danny Danon from the Likud who wanted to introduce or who introduced a bill that would want to prevent sexual relations between Arab and Jewish citizens in the state of Israel. A lot of that reminds us of the Nuremberg laws.

TARACHANSKY: In a report to the UN commissioner for human rights, ahead of last year’s conference against racism, several Israeli rights groups outlined the extent of racism and incitement in Israel. Although there is an existing ban on hate speech, there are serious problems with enforcement. Over the years, the law has been used sparingly and has rarely been used on Jewish religious leaders, a group over-proportionately involved in racial incitement. Discrimination in Israel is based on what Oren Yiftachel of the Ben-Gurion University in the Negev terms ethnocracy.

ABU-RASS: It’s about land and who owns the land in this country. Now, the Israeli government, through the Jewish federation, owns over 93 percent of the land in Israel. The Arab minority in Israel, which is about 20 percent of the population, owns less than 3 percent of the land. If we take all Arab towns in Israel, their land mass has not grown over the last 65 years, meaning a town that had, let’s say, a population of 10,000 people 30 years ago has still the same amount of hectares that it had then today, even though today it’s a town of 30,000 or 40,000.

ABU-RASS: First of all, there has not been–the Israeli government has not built not even one single Arab city ever since the creation of the country in 1948.

TARACHANSKY: Seeing widespread impunity, some citizens are taking action in their own hands. In February, a young couple and an elderly woman accosted Palestinian children in Jerusalem for speaking Arabic on the bus. The children were students at the only bilingual school in the city, a project of the Yad-be-Yad organization. Kifah Abdul Halim is Yad-be-Yad’s media coordinator.

KIFAH ABDUL HALIM, MEDIA COORDINATOR, YAD-BE-YAD (SUBTITLED TRANSL.): This discrimination is not only systemic; it has rooted itself in all the systems, including the judicial and legal systems. In Israel, not only the cops but also the courts are tougher on Arab suspects, especially when talking about attacks of this kind. It’s safe to assume that an Arab who attacks a Jew will always be punished, and relatively harshly. But if a Jew attacks an Arab, it’s very possible he’ll get out clean.

In protest of the apathy of officials from the city and the Egged bus company, the children’s parents decided to personally accompany the students on the bus, inviting the media.

CHILD (SUBTITLED TRANSL.): There it was that one [who attacked us].

CHILD (SUBTITLED TRANSL.): I hate Arabs and I support racism.

CHILD (SUBTITLED TRANSL.): What why?

TARACHANSKY: Why do you say that?

TARACHANSKY: Why do you hate Arabs?

CHILD (SUBTITLED TRANSL.): Because they shouldn’t be in this country. It’s one country, for one people. They’re terrorists, and may God burn them all.

CHILD (SUBTITLED TRANSL.): It’s very scary. I don’t even know. They’re not even willing to listen.

TARACHANSKY (ENGLISH): The state’s unwillingness to prosecute Jewish perpetrators of hate crimes was crystallized when a group of youth who recently beat Palestinian teenagers so severely one of the vicims’ heart stopped were given exceptionally light sentences. The same day of the attack, settlers in the West Bank threw a Molotov cocktail at a Palestinian taxi, burning the six passengers inside, including a four-month-old baby. They were acquitted.

INTERVIEWER (SUBTITLED TRANSL.): How do you think you’ll be received at school tomorrow?

Lia Tarachansky is a journalist and filmmaker at Naretiv Productions. She is a former Israel/Palestine correspondent for The Real News Network, where she produced short, documentary-style reports exploring the context behind the news. She has directed several documentaries that tackle different aspects of social justice struggles in Israel/Palestine.