Poll: Most Americans Believe the Economy is Rigged Against Them

Economist Gerald Epstein says U.S. workers are beginning to realize that their hardship is due to underlying workings of corporations, the banks, and neoliberal economic policies that are against their interest

Economist Gerald Epstein says U.S. workers are beginning to realize that their hardship is due to underlying workings of corporations, the banks, and neoliberal economic policies that are against their interest 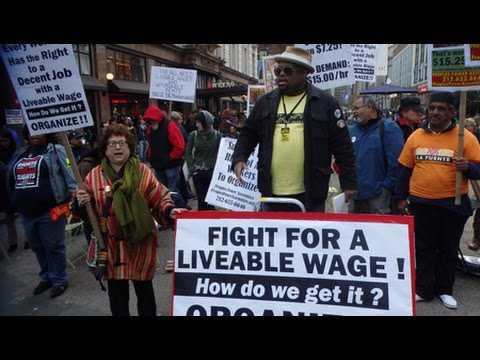 A recent poll conducted by Marketplace-Edison Research found that 71 percent of Americans believe that the economy is, quote, “rigged in favor of certain groups,” and 69 percent of the respondents said that Wall Street hurts Americans. There has also been an increase in Americans losing sleep over their financial situations since 2015.

So what exactly is fueling this sense of anxiety and exclusion when it comes to the economy? Joining me now to discuss all of this from Amherst, Massachusetts is Gerald Epstein. Gerald is co-director of the Political Economy Research Institute and Professor of Economics at UMass Amherst. Jerry, thank you so much for joining us again.

PERIES: So, Jerry, some of these findings are really eye-opening when it comes to public perception about the economy. This poll also stated that 55 percent of Americans believe that the loss of jobs in the manufacturing sector is due to free trade deals, and not just regular fluctuations in the marketplace or economy, which indicates a distrust in the economy. Your thoughts?

EPSTEIN: Yes. Well, you know, these numbers are startling. Of course, we’ve been talking for months now about the disgruntled American voter and how it’s playing out in the election and all. But these are some numbers that really, really put some clarity on this.

You know, for years the Republican Party in particular has been trying to promote this dissatisfaction with the government, that promotion of the corporations and the market is the solution. But I don’t think that’s going to sell anymore, that Americans now understand, as came out in a number of these statistics, that a lot of the troubles that they’re facing, and it’s startling, the kinds of worries–and they seem to be legitimate worries that people have–are due not entirely to government policies, but to the underlying workings of corporations, the banks and others, and the economy itself.

PERIES: And now, the economic downturn that we experience or recession we experienced in 2007-2008 has had long-term implications for a lot of people who are still out of work, and their financial situation is getting worse and worse. But when you look at sort of other indicators and what the government is telling us, we are–the economy is back in swing, and things are doing, going well, and unemployment is being reduced. But that’s not reflected in this poll. Why?

EPSTEIN: Because those data are cherry-picking the best data. We know–and Bernie Sanders, among others, has made this clear in his campaign–that for example, the unemployment numbers are misleading, and that they don’t take into account the people that are working part-time but want to work full-time, people that have just given up looking for jobs.

We know that wages have been stagnating, the median wage for several decades. And are not going up. We know that people lost–millions of people lost their homes, all their wealth in their homes, during the crisis, and the government did virtually nothing to help them. And particularly among the younger people, 24-40 years old or so, having terrible times finding jobs that are suitable to their schooling, and also allow them to pay back their enormous student debts. These are all things that make it clear that Americans are pissed off.

They’re angry, and for very good reason. And a lot of it has to do with the fact that our neoliberal government has, starting the Bushes and the Clintons and moving forward, are making policy that allowed the corporations and the banks to reap enormous profits while leaving everybody else behind.

PERIES: And another very interesting statistic is that 83 percent of African-Americans believe that the economic system is rigged in favor of certain groups, and certainly not them. In the sense that it’s not favoring them. Is there validity to this belief?