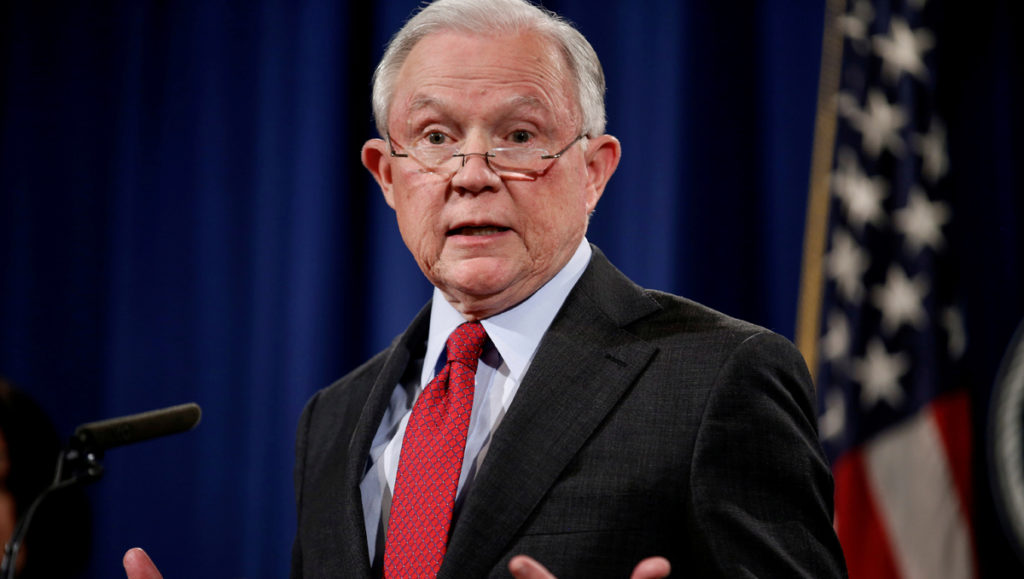 In a Thursday memo to U.S. attorneys, Jeff Sessions formally rescinded the Cole memo, the nationwide guidance specific to marijuana enforcement. The 2013 memo kept federal authorities from prosecuting cannabis laws in states that had legalized it. Sessions called the memo unnecessary, and said that, “In deciding which marijuana activities to prosecute under the law with the department’s finite resources, federal prosecutors should weigh all relevant considerations including federal enforcement priorities set by the Attorney General.”

The Department of Justice announcement heightens the uncertainty surrounding this growing industry and raises concerns about mass incarceration and civil liberties. Eight states, plus the District of Columbia, have passed laws making recreational cannabis legal, and 29 states allow patients to use the plant under a doctor’s care. On the campaign trail President Trump said that he would not interfere with state cannabis laws and Sessions assured members of his own party that he would respect the will of the states. Senator Cory Gardner from Colorado, where weed is legal, said, “The decision directly contradicts what Attorney General Sessions told me prior to his confirmation.”

With me to talk about what all this means is Grant Smith from the Drug Policy Alliance. Welcome Grant. Good to talk to you again.

GRANT SMITH: Thanks for having me on.

BAYNARD WOODS: With this memo that Sessions put out today rescinding the previous Cole memo, and saying that federal authorities could in fact prosecute marijuana laws, what are we supposed to expect from this?

GRANT SMITH: Well, I think right now there is a lot of speculation about what this means, but in reality the memo that was in place between 2013 and today really just gave guidance to prosecutors in terms of how they prosecute under the federal marijuana statutes. The states have been operating in violation of federal law all this time. It’s not clear right now what this means in practice in terms of what’s going to happen on the ground, but what I will say is it’s going to create more uncertainty in states that have moved forward with marijuana law reform.

The memo that’s in place today, that Attorney General Sessions has put in place, that rescinded the old memos in the Obama administration, basically says that U.S. attorneys have an obligation to enforce federal marijuana laws. So it’s up to the U.S. attorneys in each of these states to do that. So we’re going to see, I think, a wide variety of approaches to enforcing federal marijuana laws in these states like Colorado and Washington where state marijuana reform has moved forward.

BAYNARD WOODS: This is particularly crazy that we have an Attorney General like Jeff Sessions who is known for his states’ rights approach on many other things, from Alabama, but he seems to have this deep hatred of pot going back to when he said that he thought members of the KKK were okay until he found out that they smoked weed. What does Jeff Sessions’ history and personality, what can that tell us about what’s behind this memo today?

GRANT SMITH: Sessions has a long track record of being very punitive in his views on marijuana, on drug policy. He was one of chiefest opponents in the Senate with respect to reforming drug sentencing laws. He was one of the only and most outspoken opponents to marijuana reform in the Senate. When he was nominated by President Trump to be Attorney General, we sound the alarm, we were very clear that he is going to be a major foe as Attorney General with respect to state marijuana reform, that he is going to do all he can to interfere with the implementation of state marijuana laws. In fact, he has followed through with this. Today is the biggest sign yet that he wants to prioritize this, despite all the evidence that refutes any notion that federal interference in state marijuana laws, or any interference in state marijuana reform efforts, is productive.

BAYNARD WOODS: We know that these laws aren’t enforced equally. We’ve seen in state after state and study after study that minorities bear the brunt of drug enforcement, and particularly of cannabis enforcement, and going all the way back to calling it “marijuana” as a racist term to frighten people about Mexican immigrants. Do you think that Sessions’ alleged or demonstrated racism has a role in this memo?

GRANT SMITH: Oh absolutely. As you said, the roots of marijuana prohibition go back to the 1930s and before, when marijuana enforcement was used as a ruse to crack down on people of color and communities of color. This has played out over the years. You saw in the 1980s, on the war on drugs and Reagan, a similar approach and similar messaging. Jeff Sessions has been very clear, very blunt that he has an agenda here to bring back mass incarceration, to be very punitive. I think that’s clear from what he said and from what his intentions are. Unraveling just about every reform that has been implemented in recent years that has helped to reduce incarceration and arrest amongst communities of color, and it’s helped to … Certainly it helped to reduce marijuana arrests, including in states that have legalized marijuana.

We recently issued a report that found that in states that have legalized marijuana there’s been a dramatic reduction in arrests, including a reduction in racial disparities in terms of who was arrested in states that have legalized marijuana. All this is in jeopardy to some extent by greater federal interference in the implementation of state marijuana laws.

BAYNARD WOODS: It seems crazy in other ways too. If the populations of these states vote to legalize marijuana, then the feds are going to spend a bunch of money trying these cases where juries are most likely not going to uphold the convictions. I feel like if people are in a dispensary today in Washington State or in Colorado, it doesn’t seem like anyone’s expecting them to be raided right now, or some kind of prohibition style crackdown to happen today. Congress has this Rohrabacher Amendment; what role does that have in the ability of the Department of Justice to enforce these laws?

GRANT SMITH: One thing I would say about what to expect at the local and state level is I would not expect a lot of flashy, a lot of high-profile raids, or those types of actions from federal law enforcement. I would expect things to happen, enforcement to happen, more behind-the-scenes because I think Sessions recognizes that what he’s doing today is deeply unpopular and that the American public overwhelmingly supports making marijuana legal, certainly overwhelming support making medical marijuana legal. I don’t expect a lot of high-profile actions now, but what I would say is that we’re going to see the greater level of federal interference. Congress does need to step up.

We’re getting very close, and we have, in fact, a lot of bipartisan support in Congress for extending that protection to all marijuana, so all marijuana laws of medical and nonmedical. That would apply to states that have made marijuana legal for recreational purposes. There’s been a vote within the last two years in the House that was bipartisan and nearly passed, called the McClintock-Polis Amendment, which would have extended the Rohrabacher policy to nonmedical marijuana.

I think we’re very close to having a policy that applies to all marijuana laws at the state level, but Congress needs to act now, because Attorney General Sessions has made it very clear that he wants to make this a priority, despite the fact that it’s very damaging to communities, that it wastes a lot of tax dollars, disproportionately impacts people of color, runs contrary to the best evidence in terms of what is most effective, that marijuana should be treated as a health issue and not as a criminal justice issue, and that we are not seeing the kinds of harm that everyone expect … There was a lot of expectation that legalizing marijuana in Colorado and Oregon and Washington and other places would result in an increase in use amongst youth, higher road fatalities, that sort of thing. We haven’t seen that. When we analyzed the data we did not find that. We found in fact that things have not changed substantially in those areas and other respects as well.

I think that’s where we are now. We’re seeing … You mentioned Senator Gardner tweeting out today his disagreement and his criticism of Attorney General Sessions’ action today. We’re seeing a lot of that today. We’re seeing a lot of members on both sides of the aisle who are speaking out and criticizing this move, understanding this is a states’ rights issue and that it’s deeply, deeply concerning in terms of ensuring that we can continue to move forward with marijuana law reform in the United States.

BAYNARD WOODS: Well, Grant Smith from the Drug Policy Alliance, thanks so much for coming on today and helping us understand this confusing state of cannabis laws in the United States.

GRANT SMITH: Thank you so much for having me on.