Reflections from Cubans on Castro (1/2) 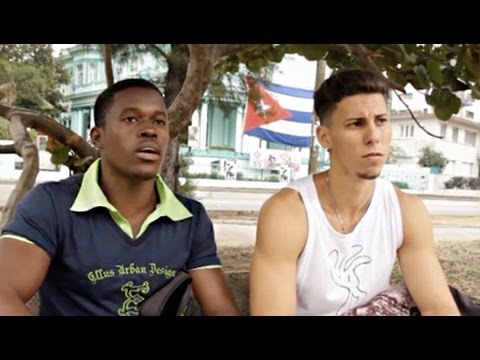 On November 25th, Fidel Castro died, and in the days following the country mourned. His ashes were taken from various cities on a national tour, ending with a big, I guess you could say, not a funeral, but a memorial, in Havana. In this interview, we’re going to talk a little bit about what that memorial was like, because our guest was there. But then we’re going to talk about what’s going on and some of the challenges that are going to be facing the Cuban people.

We had a production company do some street interviews for us in Havana, and we’re going to play some clips from those interviews, and try to contextualize them some, with our guest. And our guest is James Early, who now joins us from Washington, D.C. James, is the former director of Cultural Heritage Policy for Folklife Programs at the Smithsonian Institution. He’s a board member of the Institute for Policy Studies and The Real News Network. Thanks for joining us, James.

PAUL JAY: Describe that… in Revolution Square, describe that – masses of people that came together to say good-bye to Fidel Castro.

JAMES EARLY: Well, as far as the eye could see, on both sides of the podium, from which I had a vantage point, as well as the depth of the Plaza of the Revolution, it was – I mean – fully, fully packed with children and families and blacks and whites and mulattos, all varieties of Cuban citizens there. It was both a sad event, in which there were people who were mourning and in tears, and it was also a spirited event, in which people were very elevated, recalling and supporting the principles as were being enunciated by the various people on the podium, international leaders.

Jacob Zuma, the President of South Africa, Maduro from Venezuela, Ortega from Nicaragua, a representative from Greece, from Iran, from the Caribbean, really from all of the countries that have been allied with Cuba, both in terms of its international solidarity perspectives, that is that they have been recipients of the healthcare and other kinds of support from Cuba, including in the armed struggle, in the case of the overthrowing of apartheid in South Africa.

It was a time of mourning but also a time of spirited elevation on the part of the crowd. People stayed there for the entire five hours or so. We arrived at around 5:30. I think the program many have started about an hour and a half later, around 7:00, and it was around 11 o’clock, a little after 11 o’clock in the evening, which it concluded. I literally saw almost no one leave, although obviously I was not watching every exit.

PAUL JAY: Right. Okay, we’re going to start showing some of the clips of interviews that were done on the streets – these were produced by a local production company for us. Now, I need to contextualize this a bit. I’ve been to Cuba, I guess three times now. You can find people in Cuba that are extremely critical of the Cuban government. You find some that are quite critical of Fidel Castro. You’ll find many who are very supportive. Cuba is divided in terms of its public opinion on the success, or lack thereof, of socialism in Cuba.

The interviews that we’re going to play are all relatively positive, in terms of they’re people’s opinion of Fidel and the legacy, and we asked the production company to ask questions about Fidel’s legacy, as well as how they felt about the new developing US-Cuban relations and, in the end, we also asked about what they thought about Donald Trump and how that might affect things.

The first clip is in answer to the question, what were Fidel Castro’s accomplishments? And here’s a typical answer:

PAUL JAY: This summation of Castro’s accomplishments is something you hear, obviously, from people that are supportive and sympathetic. What do you make of that list, that the young man gives?

JAMES EARLY: Well, in the first sentence, not unlike every other society on the planet, I make that this is a culture of nationalism, in which the head of state be she, a he, a president or a prime minister, people are socialized at seeing that as a concentrated expression of them, the individual, so there is a kind of respect, and sometimes an outright reverence for that position and that individual.

For a young person of 20-some years of age, who would not have been around during the revolution, these are things that they have learned intellectually in school historically, or through conversations with parents and neighbors. And I think it represents that Fidel Castro in the most general sense was their major president, perhaps in the history of the country. It does not suggest that the individual would be in agreement with each and every policy, or each and every step that Fidel Castro took, but I think in general, it is a true generalized reflection of where most of the people in the country stand, even when they have criticisms about one or another policies, or the minority, a very small minority, who I think might… would have differences about the socialist direction of the Cuban Revolution.

PAUL JAY: Then the question was asked: what do you think about the changes that are happening now, both in terms of the economy, relations with the United States?

PAUL JAY: James, the blockade is a big part of the narrative in Cuba, and most certainly the American blockade of Cuba caused the damage, restricted its growth, made it more difficult to it to buy things on the international market, and when they did it was much more expensive. But on the other hand, it often seemed to me sometimes, that the blockade became somewhat – what should I say? – An excuse, for not having solved some of the problems that perhaps should have been able to be solved in Cuba. For example, the sort of weakening and almost destruction of Cuban agriculture so that… an island that one would have thought should’ve been self-sustainable in terms of its food, was very dependent on buying chicken and other things from abroad.

What do you make of this question of the blockade that’s raised in this clip?

JAMES EARLY: Well, I think, without question the blockade was a consistent and major hindrance, to a more naturalized development of the Cuban Revolution. But let’s quickly talk about what the blockade is. In the first instance, the blockade is the arrogance and imposition on the part of the United States government, against working within the protocols of nations, to have an open and honest dialogue with the Cuban leadership of the revolution, finding where they may have had mutual interests, and then finding proper respective modes, respectful modes, in which to carry on their debate. The United States simply curtailed that, by cutting off relations and then trying to starve the country to death.

Notwithstanding that, the Cubans have been heroic and one, in their suffering. They took the position that they would be self-determined and sovereign and independent, and they consolidated their society, in which people across the spectrum of economic differences and race and gender, lost weight when the Soviet Union fell and they were unable to get the kinds of basic consumer goods that they needed, and they did that in a consolidated way, despite differences among them, and they did it with dignity.

We must recall that when Fidel Castro stepped down in 2008 and his brother was… and he was nominated and approved by the National Assembly, Raúl Castro said that the blockade was really killing them. But he also said to the public immediately, that if that blockade were removed the next day, that Cuba would still be in trouble, that the socialist revolution would still be suffering by its own errors and its own failures, so that I think it is an honest assessment of what the blockade was, but I think many Cubans also honestly assess what were the shortcomings and the weaknesses and the problems in the government structure, that did not pay off to really help advance its society, either at the rate that it wanted to move, or in substantive areas that it needed to address.

PAUL JAY: The next clip is in answer to the question: what do you make about US influence, again, and also the sort of development of various kinds of capitalist forms in Cuba, that for many years were not allowed? Here are a few different voices on this.

PAUL JAY: You can see that there’s concern, there’s discussion, there’s debate, about just how “opening up Cuba”, quote-unquote, is going to affect things like free healthcare, free education. Just how big – how disturbed, concerned are people about this policy and how – I guess it’s a little too soon to say, but – with all these forms of capitalism developing, in terms of private ownership, and partnerships with foreign capital, which are not entirely new but are going to be at a much bigger scale, how much can the people defend the socialist character of the Cuban economy?

JAMES EARLY: Well, I think in general there will be an attempt on the part of the citizenry across different groups, and different outlooks, to try to defend some of the basic socialistic gains of the revolution, like free access to education, free healthcare, making sure that there is a welfare state, that you don’t find children and adults sleeping in the street.

But, of course, there is also a large concern on the part of the stalwarts of the socialist revolution both within the everyday citizenry, and certainly within the Communist Party, and representatives of the State, that there will be incursions, there will be negative influences, and I think they’re ready to look at some of the compromises that they will have to make. They are already evidenced in the kinds of massive remittances that are coming from outside of the country. The class differences that begin to emerge, the radicalized differences that begin to emerge, based on who is outside of the country and who is not, from a racial perspective.

There is a real concern about the shortages of certain basic foods, with the expansion of private enterprise, home restaurants called paladares, where the Cuban government has recently capped the number of paladares, because they are finding that some basic things like onions and vegetables are very difficult for ordinary people to find in the marketplace, because these small scale private enterprises are able to go and purchase and prices are going up. And Raúl Castro has recently spoken about that.

So, there is going to be some deterioration around the edges of what the Cuban socialist revolution heretofore was about, but there will also be some gains in individual imagination being expressed in self-employment and employing other citizens. But the fundamental issues of healthcare, welfare, education, culture, I think there will be a bold struggle on the part, certainly, of the government structure, and I would say the majority of the citizens, to uphold that.

Racism in America, Socialism, and Medicare for All Dominate Democratic Debate (1/2)