Food Stamps Among The Most Effective Economic Stimulus

So why have Republicans cut them?

So why have Republicans cut them?

Food Stamps Among The Most Effective Economic Stimulus 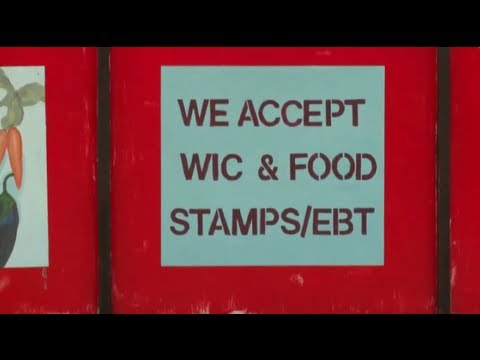 JESSICA DESVARIEUX, TRNN PRODUCER: On Thursday, in a narrow 217 to 210 vote, House Republicans passed a bill cutting the food stamps program known as SNAP by $40 billion. According to the non-partisan Congressional Budget Office, this could leave 4 million Americans without benefits next year.

Largely voted on party lines with no Democrats voting for the bill, it doesn’t look like it will make much progress. Both the Democratically controlled Senate and President Obama have been against the bill.

But regardless, the current $80 billion a year program often falls victim to myths and misinformation.

And in a round of Real News myth-busting, let’s take a look at what’s been said about SNAP on Capitol Hill.

TIM HUELSKAMP, U.S. REPRESENTATIVE (R-KA): You ought to earn the benefits you receive. Look for work. Start job training to improve your skills or do community service. But you can no longer sit on your couch or ride a surfboard like Jason in California and expect the federal taxpayer to feed you.

DESVARIEUX: So who’s getting fed on this proverbial couch? If you at look at food stamp recipients, more than three-fourths of the households receiving SNAP have at least one child, elderly, and/or disabled person living there.

Unemployed childless adults who do not have disabilities are limited to three months of SNAP benefits every three years in most parts of the country. But due to the high unemployment, this requirement has been waived in most states.

If the House bill were to become law, one of the House proposals would be to get rid of “categorical eligibility”, meaning citizens would no longer automatically qualify for food stamps if they are enrolled in another low-income assistance program. But that would mean 200,000 children who currently receive free school lunches would be kicked out of the program.

Often depicted as a drain on the economy–studies have shown that those on food stamps actually helped create an economic stimulus. A USDA study found that for “Every $5 in new SNAP benefits generates a total of $9.20 in community spending.”

STACEY BORASKY, ST. EDWARD’S UNIVERSITY: The program has always had the intention of being an economic stimulus. It started under the Great Depression, at a time when not only did consumers not have money to be able to purchase a variety of things that they needed, but the farmers didn’t have a way to sell the goods that they were producing. So eggs, cheese, vegetables, fruits, all those things that farmers were still continuing to try to grow couldn’t be sold. So the government decided to create this program not just to help people get food, but to help to be able to sell their goods. So it’s always had that effect. So I think it’s kind of a–it’s just a misconception that people have about its intent from the very beginning.

Myth 2: SNAP is riddled with waste, fraud and abuse.

DESVARIEUX: Yes, Congressman Harris is right that abuse happens in 10 percent of businesses that accept food stamps. But what’s really important here? Where the fraud happens or how often?

By the USDA count, only 3 percent of all SNAP benefits represented overpayments, meaning they either went to ineligible households or went to eligible households but in excessive amounts. USDA says it has a zero tolerance policy on fraud and has come out with additional methods to fight abuse.

But in the grand scheme of things, SNAP actually has one of the lowest rates of fraud of any federal program.

MIGUEL FERGUSON, SCHOOL OF SOCIAL WORK, UNIV. OF TEXAS: It’s actually a rigorous process to get food stamps, and it can take quite some time, and people aren’t going to go through that unless they really need the assistance. And I think that’s what explains why something like 30 percent of Americans who are eligible to receive stamps don’t do it. Some of them don’t know about the program, but many of them just don’t want to go through the hassle.

ERIC CANTOR, U.S. REPRESENTATIVE (R-VA): If somebody is abusing the system or if somebody somehow gets used to a life of dependency, how is it fair for the working middle class of this country to have overtime, to work two jobs to help pay for that?

DESVARIEUX: A life of dependency is what both sides of the debate want to avoid. SNAP was created to be a temporary system, and for the most part it has been, with the average participant staying on SNAP between eight to ten months. And those on the program are barely making it with $4.50 a day to spend on food, which comes out to about $1.50 a meal.

But it does seem to make a difference. A Census Bureau report released Tuesday found that food stamps have helped lift about 4 million people above the poverty line and have kept tens of millions more from becoming poorer.

Obviously, a major factor for the jump is the recession. Unemployed people increased by 94 percent from 2007 to 2011. There was a 70 percent increase in the take-up rate for SNAP during the same period.

FERGUSON: So the take-up rate has gone up during the Great Recession. But also, people haven’t been leaving the program as fast as they have in the past. So those two things have contributed to this increase to 70 percent.

Now, there’s huge variation among the states, which is kind of a very peculiar thing related to U.S. social policy. You really wouldn’t find this in any other industrialized country. So, for example, California, it’s just over 50 percent of eligible people receive food stamps. But Maine, obviously a smaller state, etc., it’s almost 100 percent. So almost everyone in Maine who is eligible to receive food stamps receives benefits.

DESVARIEUX: A point that neither side of the aisle wants to take responsibility for.

Experts point to a higher cost of living and stagnant wages as being the main catalysts for a growing number of people becoming eligible for the program.

BORASKY: People are working more and more hours, becoming more productive than we ever have in the last 20, 25 years, but wages have been stagnant. So you see people working really hard, sometimes two and three jobs, trying to make ends meet. Their wages have not kept up with the cost of living.

And so while it was intended to be temporary, it’s really not in effect that people are abusing the system, are staying on the system when they’re not eligible. They still don’t make enough money. There are significant numbers of employers in this country who pay so little that they tell their employees how to apply for SNAP. They actually give them where to go, how to do it, because they know their employees are going to qualify for SNAP. So that speaks to me that we’re supplementing businesses, we’re actually subsidizing their ability to pay low wages.

DESVARIEUX: There’s no mention of wages in the House bill. But regardless, it looks like it won’t be making much progress with both the Democratically controlled Senate and President Obama speaking out against the bill.

But is there a real threat to food stamps in the future? The Senate-approved farm bill cuts food stamps by $4 billion. Democratic New York Senator Kristen Gillibrand proposed to restore the $4 billion in cuts with a limitation on crop insurance reimbursements.

The current system has the government pay insurance companies to run the program, then the government pays farmers to buy coverage, and then Uncle Sam fronts the bill if losses exceed predetermined limits. The U.S. Department of Agriculture last year spent about $14 billion insuring farmers against the loss of crop or income. This system was meant to help farmers during the Depression, but many argue that at the end of the day taxpayers are the ones feeling the hit.

Senator Gilliband’s proposal didn’t go far. It failed with a 26-70 vote. Not even a majority of Democrats voted for it.

SNAP is already slated for cuts in November, when previous approved legislation goes into action.

Now Americans will have less than $1.40 to spend on each meal. And that’s a hard fact.

December 26, 2019
Sign Up for Our Newsletter
Help Us Make Real News!