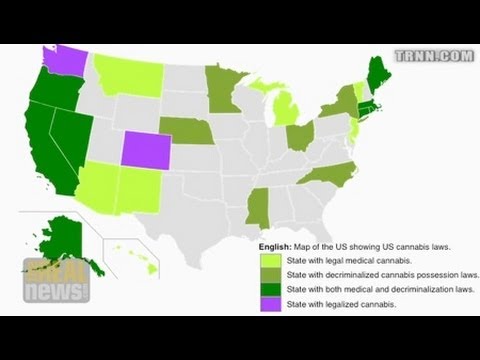 VOTERS IN WASHINGTON STATE AND COLORADO MADE HISTORY ON ELECTION DAY.

THE TWO STATES BECAME THE FIRST IN THE U-S TO ALLOW THOSE 21 AND OLDER TO POSSES UP TO AN OUNCES OF MARIJUANA FOR RECREATIONAL USE. BUT WHILE LEGAL ON A STATE LEVEL, MARIJUANA IS STILL ILLEGAL FEDERALLY – WITH VIOLATORS SLAPPED WITH STRICT FINES AND JAIL TIME.

TRYING TO KEEP THE FEDERAL GOVERNMENT OUT OF THESE STATE INITIATIVES IS NEILL FRANKLIN. FRANKLIN IS A FORMER UNDERCOVER NARC POLICE OFFICER AND THE EXECUTIVE DIRECTOR OF LEAP WHICH STANDS FOR LAW ENFORCEMENT AGAINST PROHIBITION. AT THE US JUSTICE DEPARTMENT IN WASHINGTON, HE DROPPED OFF A LETTER FOR ATTORNEY GENERAL ERIC HOLDER URGING THE FEDERAL GOVERNMENT TO RESPECT THE WILL OF THE PEOPLE AND UPHOLD THE LEGALIZATION OF MARIJUANA FOR RECREATIONAL USE IN THOSE STATES.

SOT NEILL FRANKLIN (EXECUTIVE DIRECTOR, LEAP): It’s not going take long to see the results. It’s not going to take long to realize how many people are no longer being arrested and saddled with arrest records. It’s going to hinder their employment possibilities and their education possibilities. It’s only going to take a matter of months. And we know how slow government moves. And we know one thing, the Seattle police department has already said that we’re not going to be arresting people for the possession of marijuana. Those results are already being experienced. So despite what the Obama administration does, it’s going to take a while. And during this time span, we’re going to have results. We’re going to have information. We’re going to have data that clearly shows that this was the right thing to do.

NOW, 21 STATES AND WASHINGTON DC HAVE LAWS ON THE BOOKS EITHER DECRIMINALIZING MARIJUANA OR ALLOWING THE SALE AND USE OF MEDICAL MARIJUANA.

FRANKLIN SAYS LEGALIZATION WOULD IMPROVE THE LIVES OF YOUNG PEOPLE, ESPECIALLY BLACK AND LATINO MALES WHO ARE OFTEN CAUGHT IN THE JUSTICE SYSTEM AT A YOUNG AGE .

BUT THERE ARE ARGUMENTS AGAINST LEGALIZATION.

IN A PREVIOUS INTERVIEW, THE REAL NEWS SPOKE WITH FORMER SENIOR DRUG POLICY ADVISOR IN THE OBAMA ADMINISTRATION KEVIN SABET WHO SAYS LEGALIZATION WOULD INCREASE USE AMONGST YOUNG PEOPLE.

SOT: KEVIN SABET, (FMR. SENIOR DRUG POLICY ADVISOR IN THE OBAMA ADMIN.): RAND Corporation, which is a nonprofit, independent organization that has nothing to do with government, did a major study on the impact of legalization and what would happen in California when they were going for legalization of marijuana, and found that there would be a significant increase in use because of prices would fall. So, I mean, economics 101, drug policy 101: drug prices under legalization fall and use goes up. Youth are especially sensitive to price. So thatâ€”you know, and they who do not have a stake in the political or policy game said that that would happen.

BUT FRANKLIN ARGUES LEGALIZATION WOULD NOT HAVING SUCH ADVERSE EFFECTS ON YOUTH SINCE IT WOULD BE REGULATED.

SOT NEILL FRANKLIN (EXECUTIVE DIRECTOR, LEAP): Because it’s prohibited, we’ve given control of it and the distribution of it to organized crimes – to disorganized crime, to local gangs and cartels. And we literally have an outlet, a distribution point at every street corner in many of our neighborhoods. They don’t card young people to make sure that they’re 21 years of age. If they have the money, they can buy it. That’s what we have. That’s why we have so much marijuana floating around in our schools today. Because our gangs hire and recruit, they pressure young people into the business to sell to other young people in our schools.

That’s why we have so much access today. Will these new policies of regulation and control legalization completely remove marijuana from the hands of our children. No. And it would be foolish to thinks that that could be. But it would greatly restrict the access that they currently have.

HOW TO CONTROL MARIJUANA UNDER THE NEW MEASURES HAS YET TO BE DETERMINED. THE GOVERNORS OF WASHINGTON STATE AND COLORADO ARE STILL WAITING TO HEAR FROM THE FEDERAL GOVERNMENT.

SOT JOHN HICKENLOOPER, Colorado Governor: We would like to the government to take into consideration the wishes of the people, but we are hoping that we can find a way that we can regulate marijuana but it will be up to the federal government.

THE FEDERAL GOVERNMENT WILL NOT ONLY HAVE TO FACE OFF WITH VOTERS IN WASHINGTON AND COLORADO. BUT NOW, MAINE AND RHODES ISLAND WILL BE INTRODUCING BILLS TO LEGALIZE MARIJUANA. AND THERE ARE TALKS OF BALLOT INITIATIVES IN CALIFORNIA AND OREGON IN THE NEXT MAJOR ELECTIONS.