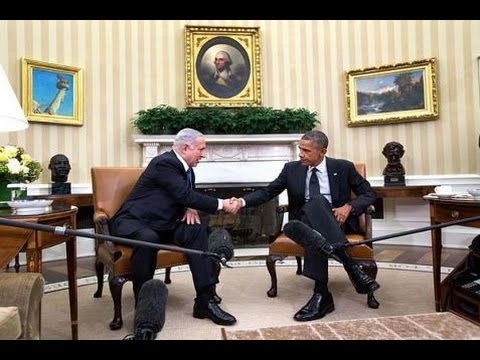 JESSICA DESVARIEUX, TRNN PRODUCER: On Wednesday, President Obama welcomed Israeli Prime Minister Benjamin Netanyahu to the White House. It’s been seven months since Netanyahu’s last visit the White House, and his first visit to the Oval Office since the Israeli airstrikes on Gaza this past summer in Operation Protective Edge. The conflict killed about 70 Israelis, 66 of them IDF soldiers, and at least 2,100 Palestinians, mostly civilians. There was no mention of specifics about the war by either leader, after deciding not to field any questions from reporters. Netanyahu said that he still supports a two-state solution.

BENJAMIN NETANYAHU, ISRAELI PRIME MINISTER: I remain committed to a vision of peace of two states for two peoples based on mutual recognition and rock-solid security arrangements on the ground.

DESVARIEUX: But with some 2,500 new settlements announced on Wednesday, Institute for Policy Studies fellow Phyllis Bennis said such actions do not support a two-state solution.

PHYLLIS BENNIS, FELLOW, INSTITUTE FOR POLICY STUDIES: Two thousand six hundred new settlement units that are going to be built in a settlement in between Jerusalem and Bethlehem, which will once again completely cut off the West Bank from Jerusalem, making a two-state solution impossible, if anybody believed it was still possible.

DESVARIEUX: Protesters in front of the White House on Wednesday said Netanyahu should be held accountable for war crimes. Groups like Amnesty International point to examples of Israel bombing UN shelters after repeatedly notifying the Israeli military of their location.

ALLI MCCRACKEN, NATIONAL COORDINATOR, CODEPINK: Under President Obama, we’ve actually increased U.S. military aid to Israel, up to $3.8 billion every year. That’s about ten point four or five million dollars every single day that we could be using here in the United States to fund our communities, to rebuild infrastructure, to fund education, health care, literally anything else. But instead we’re giving it to Israel, which is using it to buy weapons, mostly from American weapons manufacturers, to kill people in Gaza.

DESVARIEUX: According to the survey report by [Institute for Research: Middle Eastern Policy] “American Public Opinion on U.S. Aid to Israel”, six out of ten Americans believe the United States gives much too much or too much foreign aid to Israel. Signs that the tide could be turning between the two countries happened this summer when the State Department denounced Israel bombing UN shelters. However, Bennis said, these words of condemnation don’t match up with the United States’ action.

BENNIS: What we didn’t see was action to match those words, even then. So even while those attacks were underway, we heard the words from President Obama, this is something that must be condemned. That’s all fine. But within minutes after making those statements, the U.S. was offering Israel $225 million, a quarter of a billion dollars, in additional military aid. That’s on top of the $3.1 billion that was already given this year in military aid, this time to help bolster the antimissile system in Israel. And the U.S. openedu up its military warehouse that it keeps in Israel for use by U.S. troops in the region who might need them for whatever they’re doing and whatever part of this war, but essentially opened up the doors, like opening it up to children in a candy store, and saying, go, take whatever you want, help yourselves. So if you were an Israeli government official, Netanyahu or anybody else, are you going to look at the sort of uncomfortable words as definitive, or are you going to look the actions? I think they’re looking at the actions, and they’re seeing he’s saying whatever he’s saying for political reasons; we don’t have to pay much attention.

DESVARIEUX: Attention is now being placed in Iraq and Syria to defeat the extremist group ISIS. President Obama said his bond with Israel has never been stronger, especially as the United States continues airstrikes in both countries. Netanyahu said that Israel will continue to support the U.S. effort. And during his speech to the United Nations, he linked ISIS to Hamas.

NETANYAHU: Hamas is ISIS, and ISIS is Hamas. And what they share in common all militant Islamists share in common. Some want to restore a pre-medieval caliphate from the seventh century; others want to trigger the apocalyptic return of an imam from the ninth century. They operate in different lands. They target different victims. And they even kill each other in their battle for supremacy.

BENNIS: Well, there’s number of problems. If you look at the origins of Hamas, Hamas was an organization that was created in the Gaza Strip in 1987. It looked to the Muslim Brotherhood in Egypt as its kind of role model. And it gained popular support not because people in Gaza necessarily like the idea of a political party that was religiously-based, but because it began by providing the kind of social services that the Israeli occupation forces were not providing. So they built clinics, they built schools, they created summer camps–that was one of the big issues for children in Gaza.

But the notion that Hamas is somehow the same as ISIS, first of all, ideologically, theologically, it’s completely different. They have nothing to do with each other. Hamas is not talking about creating a caliphate anywhere, let alone seventh-century style. It’s more religious than certainly I would feel comfortable with. But I don’t live there. You know, it’s not up to me to say whether people in Gaza should live under a secular or a religious party. That’s their business, not mine.

When you look at ISIS, this is an organization–the only thing it has in common with Hamas is that it also emerged in the context of foreign occupation, in this case the U.S. occupation of Iraq. And it was in that context–originally it was called al-Qaeda in Iraq, or al-Qaeda in Mesopotamia. In that context, it was one of many religiously based, sectarian-based militias that were fighting against the U.S. occupation and the U.S.-backed government, the Shia government in Baghdad, that was, from the beginning, an incredibly sectarian government.

DESVARIEUX: After the meeting between Netanyahu and Obama, White House spokesman Josh Earnest criticized the Israeli housing plan to build thousands of new settlements. He said, quote, “This development will only draw condemnation from the international community”. “It also would call into question Israel’s ultimate commitment to a peaceful negotiated settlement with the Palestinians.” But in spite of this rhetoric, critics point to Israel remaining as the number-one recipient of U.S. foreign aid, and for them, U.S. and Israeli relations will continue to be business as usual.