TRNN's Jessica Desvarieux explores the root cause of the scandals involving USAID and the American Red Cross, and looks at whether there is a way to get donations directly to local communities with accountability.

TRNN's Jessica Desvarieux explores the root cause of the scandals involving USAID and the American Red Cross, and looks at whether there is a way to get donations directly to local communities with accountability. 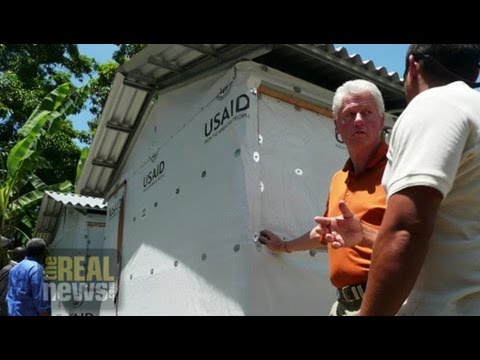 JESSICA DESVARIEUX, PRODUCER, TRNN: When the earthquake in Haiti hit more than five years ago, the message to Americans was to give, especially to the American Red Cross.

MICHELLE OBAMA: We can help the American Red Cross as it delivers the food, water, and medicine that can save lives. Donate $10 by texting Haiti to 90999.

GAIL MCGOVERN, CEO, AMERICAN RED CROSS: The American people were so very generous, and that money is being used to help the Haitian Red Cross get Haiti back on its feet. And now we’re pivoting to long term solutions where we can start building permanent, semi-permanent shelters, jumpstart livelihoods, and work on trying to get people out of the tented communities.

DESVARIEUX: But that plan never became a reality. An investigation between ProPublica and NPR found that not only did the Red Cross only end up building six homes for the 1.5 million homeless Haitians, but oftentimes they didn’t know how their funds were being used.

LAURA SULLIVAN, NPR: They had the resources, they did not have the knowledge. And one of the senior officials we talked to was in charge of their Haiti shelter program, Lee Mullaney, and he said they just never had a plan for housing. Other people we talked to said, this is not anything that they knew how to do. And they were kind of flying blind in some ways in terms of being able to get these housing projects off the ground. And the housing projects that they, they weren’t able to build any homes. They say they provided homes for 130,000 Haitians. This is another number that just did not add up when we actually dug down into it.

DESVARIEUX: This digging has continued with Iowa Senator Chuck Grassley, who asked the Red Cross to answer specific questions about how it spent half a billion dollars. He said in a statement that he was left unsatisfied with their responses, saying, quote, it’s unclear why the Red Cross enters into contracts with other organizations, stipulating that details of grants can’t be disclosed to the media or donors. Who’s driving the lack of disclosure, the Red Cross or the grant recipients? What’s the rationale for it?

This process of entering into grants with other partner organizations is known as re-granting. The Red Cross will allocate funds that it acquired to another nonprofit that may have more experience but not more transparency.

Executive director of the Disaster Accountability project Ben Smilowitz says that in the end it comes down to more overhead.

DESVARIEUX: Now the aid world is entangled in another scandal in Haiti. Documents show that the U.S. Agency for International Development, of USAID, gave nearly $100,000 to a Haitian political movement with close ties to Michel Martelly after the country’s 2010 election. Research associate for the Center for Economic Policy Research Jake Johnston broke the story.

JAKE JOHNSTON, RESEARCH ASSOCIATE, CEPR: What I found through Freedom of Information Act requests is that USAID, through one of their big contractors, Chemonics, had actually provided some support and hand tools and things like that to a group called Movement Tekale. Now as you know, their current political party is the Parti [Hacienta] Tekale. Tekale is the sort of nickname of Martelly. And what that document showed was that this money came right after the election. While they denied that it was political to me and said this was not political, a group of documents have come out actually passed after this article came out that directly show the U.S. referring to this organization as being founded by Martelly campaign members.

DESVARIEUX: Though restricted, USAID funding for political parties is not a breach of policy. However, support is allowed only under certain terms. For example, all parties must receive, quote, equitable levels of assistance, and funding cannot affect election results. Back in 2010 the Tekale party won the presidential election. And in last Sunday’s election we have yet to see how President Martelly’s party will fare in legislative elections this time around.

But is there a way to create a system where aid actually works in Haiti? Ben Smilowitz says it has to start with where you give.

SMILOWITZ: The idea is that the moment a disaster happens there needs to be good information about where people can donate so they don’t reinvent this ridiculous cycle. And so the organizations that, from the outside that don’t have any capacity shouldn’t raise a dime after events when they don’t have capacity. We’re building an online platform that essentially collects data from local civil society groups in each country about their capacity to respond to a disaster. And so if we can guide donors, individual donors, viewers, corporate donors, foundation donors, really any type of donor to give more effectively and smarter, directly–not through us, but directly to organizations, bank accounts, but to groups that are more transparent and that actually have capacity to respond, then we will likely see fewer of these issues after events, and we’re actually empowering local organizations to do the jobs that need to get done.

DESVARIEUX: Empowering local organizations to take the lead during disasters would be one major step in moving away from the business as usual model in development, and perhaps improve the response for the next disaster.