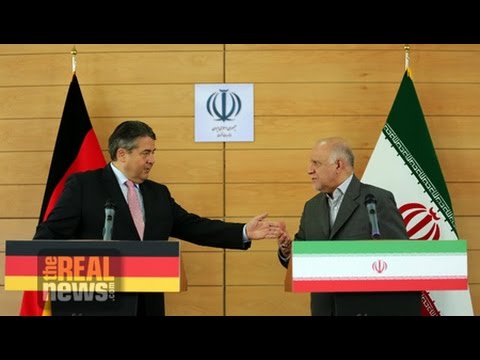 JESSICA DESVARIEUX, PRODUCER, TRNN: For members of Congress the clock is ticking on whether or not to pass the Iran agreement. During the 60-day review period lawmakers will look at how Iran will curb its nuclear activities in exchange for sanctions relief. That relief couldn’t come soon enough for Iran, whose economy has been suffering since international sanctions were enforced back in 2002. For example, in 2013 the country’s economy experienced its first contraction in two decades. And in the same year oil exports declined by 60 percent.

But now with the prospects of sanctions being lifted, who will be the winners and the losers of Iran being back open for business? One clear winner will be European businesses.

TRITA PARSI, PRESIDENT, NATIONAL IRANIAN AMERICAN COUNCIL: Germany lost, according to our study, around $28-40 billion just in the first two years. And then there are some other European countries like Italy and Spain who lost significant amounts. Who are not the main trading partners, but they lost a lot because they import a lot of Iranian oil and they sold a lot of things to the Iranians.

So these countries are now lining up. The Germans have already been there, the French foreign minister is the first foreign minister from the P5+1 who has gone back to Iran. Which is a bit ironic mindful of the fact that he tended to present himself as the most hawkish foreign minister within the P5+1.

DESVARIEUX: Though sanctions haven’t been officially lifted some companies are already moving in, like German company Mercedes-Benz. It plans to sign a deal that will allow it to produce cars and commercial vehicles in Iran. Another winner is the United Arab Emirates luxury city of Dubai.

PARSI: But Dubai is in favor of this, because they believe that once Iran opens up for business a lot of Western companies are going to headquarter themselves in Dubai and fly in and out of Iran, rather than headquartering themselves in Iran, which is a more traditional society. I mean, nothing close to Saudi Arabia. But for a lot of Europeans and Westerners it just will be more convenient to live in Dubai.

DESVARIEUX: But what about American businesses? Will they benefit? At a Senate Banking Committee on Wednesday officials made it clear what sanctions relief would and would not mean for American-Iranian trade relations.

PARSI: As it looks right now they really won’t. Because the American embargo and trade sanctions on Iran pre-date those that were imposed in 2007 and later as a result of the nuclear issue. And they are untouched in all of this.

Now, the president can issue waivers, he can do carve-outs and issue licenses. But we have not seen any of that yet. And with this fight in Congress a lot of American businesses remain cautious. Because even if the deal passes they’re still going to be afraid of ending up on the wrong side of Congress.

DESVARIEUX: But who does end up on the wrong side of the deal, essentially losing out on future revenue? Parsi says look no further than to Iran’s rival in the region, Saudi Arabia.

PARSI: A lot of countries are actually going to start shifting, and buying more Iranian oil and less Saudi oil. And that’s going to further reduce Saudi Arabia’s strategic significance. Again, it does not mean that Saudi Arabia will not be a significant player. It will be. But the degree to which it was is going to reduce.

DESVARIEUX: Also, even within Iran a section of the Islamic Revolutionary Guard Corps, or IRGC, which commands a vast economic empire in the country, will lose out in this deal.

PARSI: At one point the president in Iran, Rouhani, even made that clear. He said, those who are making money off of sanctions need to start finding themselves some new jobs. So there are those in Iran who are making money. Many of them are very close if not in the government. They will lose out of this, at least in the short term. But some of them have also come to the realization that even if they lose, because they don’t make money off of sanctions, if you have a much more functioning economy, you can still make more money than you did before.

DESVARIEUX: That opening up to business some argue will strengthen the IRGC’s hold on the economy and further the interests of the elite. But what about the interests of everyday Iranian people? How will they fare with sanctions relief? Parsi says the general population has paid the highest price during sanctions, and will see more relief in terms of goods like medicine being more readily available and affordable.

But what has yet to be seen is whether Washington will join the rest of the world in granting Iran sanctions relief for regulations on its nuclear program, a trade-off President Obama said if not made, could lead to war.

PRESIDENT BARACK OBAMA: Between now and the Congressional vote in September you are going to hear a lot of arguments against this deal backed by tens of millions of dollars in advertising. And if the rhetoric in these ads and the accompanying commentary sounds familiar, it should. For many of the same people who argued for the war in Iraq are now making the case against the Iran nuclear deal.