The Forces Behind SCOTUS Anti-Union Ruling

In Harris v. Quinn, the Supreme Court rules that quasi-public employees don't have to pay dues, while signaling that public sector employees could be next.

In Harris v. Quinn, the Supreme Court rules that quasi-public employees don't have to pay dues, while signaling that public sector employees could be next. 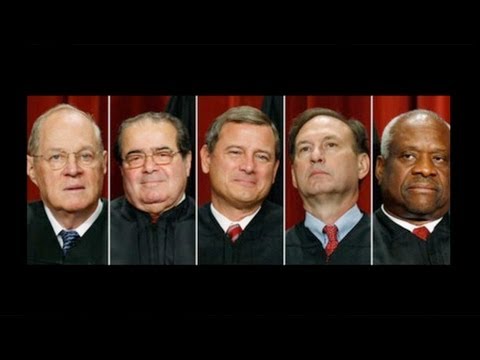 JESSICA DESVARIEUX, TRNN PRODUCER: Before the Supreme Court’s term comes to an end, the highest court in the land threw a punch at organized labor.

In a 5-4 ruling, the Court decided that unions could only require dues from fully fledged state employees. So in the case of Harris v. Quinn, home health care workers, who are considered quasi-public employees because they get paid through government programs like Medicare and Medicaid, would not have to pay dues. The conservative Justices of the court ruled that these home health care workers were employed by the individuals who they care for and not the government; therefore, compulsory union dues were a violation of free speech rights.

Jean Ross is the copresident of the nurses union National Nurses United. She says this decision will ultimately hurt the power of unions and workers’ rights.

JEAN ROSS, COPRESIDENT, NATIONAL NURSES UNITED: For nurses in particular and health care workers who look out for the welfare of the patient, they’ve given us little to stand on when we advocate for patients, because as unions we can stand together, but if you take away our power–and that’s what you do when you take away the money from the unions that we pay in dues–there is no way for them to function well when you do that.

DESVARIEUX: Founding president of the Economic Policy Institute Jeff Faux says that this ruling will make it a lot more difficult to organize.

JEFF FAUX, FOUNDING PRESIDENT, ECONOMIC POLICY INSTITUTE: When the service employees organized these workers, they were making minimum wage, $7.25. Now, these are people caring for the poorest sick people in the country. So they were getting the minimum wage. Now, because the union bargained decent wages and better working conditions, they’re getting over $12 an hour. Now, that’s a significant increase. And for that, the union has said, we want the workers to pay the cost of that collective bargaining. And the Supreme Court says, no, they don’t have to.

DESVARIEUX: The National Right to Work Legal Defense Foundation–in a video response to the court’s ruling, here’s what the organization’s president, Mark Mix, had to say:

DESVARIEUX: The National Right to Work Legal Defense Foundation is the non-profit arm of the National Right to Work Committee, a lobbying group that has gotten so-called “right to work” legislation passed in 24 states across the country. It’s even gotten a right-to-work law passed in former union strongholds like Michigan. On their website, they explain that “Right to Work law guarantees that no person can be compelled, as a condition of employment, to join or not to join, nor to pay dues to a labor union.”

But after an investigation by Center for Media and Democracy, they found out who exactly is behind what they call an anti-union crusade. According to the report, in 2012, billionaire energy tycoons the Koch brothers funneled $1 million to the National Right to Work Committee. Right-to-work organizations have also received significant funding from the owners of Walmart, the Walter Family Foundation, and the beer corporation Coors family’s Castle Rock Foundation; also Wisconsin’s Bradley Foundation, the John M. Olin Foundation, and the Searle Freedom Trust.

To better understand these groups and their intentions The Real News interviewed professor of history at Yale University Jennifer Klein. She is the coauthor of the book Caring for America: Home Health Workers in the Shadow of the Welfare State.

JENNIFER KLEIN, HISTORY PROFESSOR, YALE UNIVERSITY: They are also heavily backed by a number of conservative think tanks–the Cato Institute, the Mackinaw Center for Public Policy, the Pacific Legal Foundation. And each of these filed amicus briefs in the case. These are all organizations that have shown they have a fundamental goal of getting rid of public sector unions and undermining their ability to engage in collective bargaining.

DESVARIEUX: Jennifer, I want to talk about the counterargument here. And labor critics, they may argue that these workers shouldn’t be forced to pay these union fair-share fees that this case is looking into. Essentially how would you respond to that?

KLEIN: Well, first of all, I want to start with the notion that we have to accept that the kind of work that these women do is real labor. And I think a lot of what goes on here is a denigration of the fact that it’s not real work and assuming that, oh, this is just the kind of task that mothers or wives or daughters should do out of love or obligation. And so that has made it–devalued labor that is so low-paid.

And so, through unionization they have managed to increase their pay significantly. In Illinois it’s 65 percent and gained health insurance. And so unionization has made a big difference not only for the women who do the work, but also for the people who receive the service, because now the labor market is much more stabilized.

FAUX: The decline in unions has been, in my view, the number one or maybe number two reason for the huge increase in inequality that we have seen in this country over the last 25 years. Now you can get the benefits of having a union but not have to pay for it. Now, you know that’s an untenable position. It’s a little like the Supreme Court telling businesses that they don’t have to charge for the services and the products that they give customers. I mean, it just makes no sense only if you understand that they’re at war with American workers [sic].

DESVARIEUX: With Justice Alito signaling that more anti-union decisions could be coming down the road, copresident of the National Nurses United Jean Ross says working people need not rely on the courts to protect their rights.

ROSS: Life for working people in this country is going downhill. I have children, I have grandchildren. I don’t want to turn this kind of a society over to them. And I believe we’re a better society than this. But you can count on the nurses to speak up for patients and people in this country. You can count on people who work for a living not stopping and standing up for your rights. We could use the rest of the public to stand up with us, whenever they will.