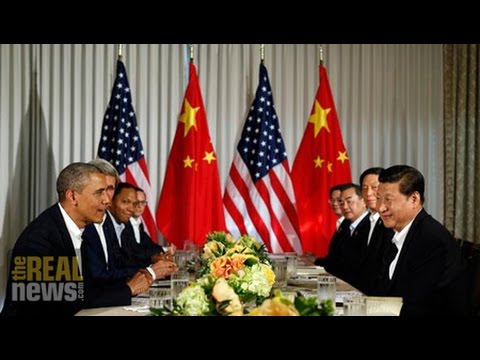 JESSICA DESVARIEUX, TRNN PRODUCER: On Tuesday, Treasury Secretary Jack Lew testified before the House Financial Services Committee to discuss the status of the International Monetary Fund. The Treasury has been pushing Congress to implement 2010 reforms to the IMF that would give emerging countries like China more weight. But members of Congress question how that could affect America’s position.

STEPHEN LYNCH, U.S. REPRESENTATIVE (D-MA): I’m just concerned about whether or not we have in a governance respect, the same weight and the same influence that we have today.

JACK LEW, U.S. TREASURY SECRETARY: Congressman, the thing about the IMF reforms that’s so important is it preserves the U.S. position and it provides for some reallocation of representation, basically, between Europe and emerging economies.

It was a difficult negotiation. It was critical to us to maintain the U.S. position in the IMF. And the reason it’s so important to ratify the agreement is that we’re the last country to step forward. We right now are the only country standing in the way of having the IMF reform become the policy of the IMF. The impatience around the world is becoming extremely high.

These actions have put the U.S. on the defensive, and members of the Financial Services Committee expressed increased suspicion of China’s growing influence. And one member called for sanctions against China for its currency manipulation.

BRAD SHERMAN, U.S. REPRESENTATIVE (D-CA): Every time I raise this question, the answer I get is: but China–as to why we’re not sanctioning China for its currency manipulation, I’m told China is cheating less. And I haven’t been married as long as many of the members of this committee, but I’ve been advised by at least a few not to use the line “But honey, I’m cheating less.” The law is clear. If China is manipulating its currency, you’re supposed to designate them. Other than the fact that that would make them really mad, and they are cheating less, why haven’t you carried out existing law in designating China a currency manipulator?

LEW: Congressman, we have engaged directly with China in an aggressive way on this question of currency policy, and we’ve made enormous progress. And I think if you look at–.

SHERMAN: You’re getting them to cheat less, but you’re not following the law.

LEW: Congressman, I think if you look at what the goal of the currency report is, we have put a bright light on practices that need to change. We have been aggressive in international bodies and in bilateral negotiations to push hard to get change. And with China, we’ve in the last year gotten some substantial recognition of that, both in terms of not intervening in the way–.

SHERMAN: Mr. Secretary, you’re not following the law, but you have persuaded them to cheat less.

LEW: Congressman, if I can say, the consequence that you–comes from the designation you’re describing is an intensive consultation process. We are doing that.

SHERMAN: What about the consequence to our constitutional system when the executive branch takes the attitude, Congress doesn’t know what is doing, so we’re not going to follow the law? I would say the damage that TARP has done to our social contract, the damage that an attitude of we shouldn’t follow the law ’cause it’ll have bad consequences does to the social contract is very significant.

DESVARIEUX: But also very significant, Lou argued, was that without Congress approving IMF reform, America’s credibility hangs in the balance. Since 2000, IMF’s capital has been steadily shrinking relative to the world economy, mostly due to big bailouts to European governments totaling $268 billion. Lew warned that without these reforms, America’s influence would wane in the world.

LEW: Our continued failure to approve the IMF reforms is causing other countries, including some of our allies, to question our commitment to the multilateral institutions that we worked so hard to create. And until these reforms are in place, the United States runs the risk of seeing its preeminent role in these institutions eroded, especially as others are establishing new and parallel financial institutions.

The fact is the IMF reforms will help convince emerging companies to remain anchored in the multilateral system that the United States helped design and continues to lead. And these reforms are a win-win for the United States. They retain our veto power, and they do not increase our financial commitment. That’s why we’re determined to continue to work with Congress to get these reforms passed as soon as possible.

DESVARIEUX: With Republicans against such reforms and their control of both houses of Congress, Treasury will likely be waiting a long time.