Will Tipped Workers Get Excluded Again From Minimum Wage Hike?

Federal tipped workers' $2.13 hour wage hasn't been raised since 1991, but will the Harkin-Miller bill be enough of a raise?

Federal tipped workers' $2.13 hour wage hasn't been raised since 1991, but will the Harkin-Miller bill be enough of a raise? 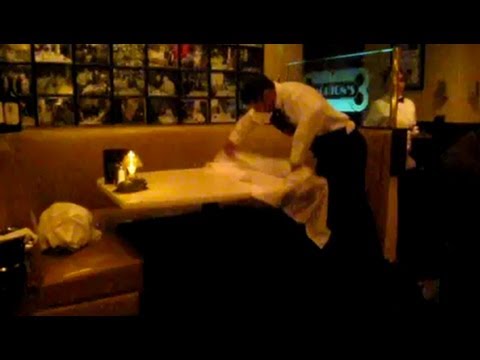 JESSICA DESVARIEUX, CAPITOL HILL CORRESPONDENT: As part of her normal routine, 27-year-old Catherine Bryant packs up her apron, locks her front door, and heads to work.

Catherine is like one out of ten Americans who works in the restaurant industry. She is a waitress in Washington, D.C., and represents the 70 percent of tipped workers who are women.

The federal minimum wage for tipped workers is $2.13 an hour. But working in D.C. means that Catherine makes $2.30 an hour not including tips.

But with such volatility in pay and living in an expensive city, she says its hard to plan for the future.

CATHERINE BRYAN, WAITRESS: And if your wage can vary from $9 an hour to $15 to $20 an hour during holiday season or, you know, something like that, it’s very difficult, it’s really hard to predict and forecast.

DESVARIEUX: What’s also hard to forecast is the future of the Harkin-Miller bill on Capitol Hill. The bill will increase the required cash wage for tipped workers in annual $0.85 increases until it reaches 70 percent of the regular wage, which means that tipped workers can earn up to $7 an hour.

On March 12, the Senate Committee on Health, Education, Labor, and Pensions called Labor Secretary Thomas Perez to testify about the effects of the bill on labor markets.

Those on the right, like South Carolina Republican senator Tim Scott, challenged him on the idea that raising the minimum wage would not be a major hit to the job market.

SEN. TIM SCOTT (R-SC): Why aren’t we spending more time talking about creating jobs when in fact we know statistically without question that raising the minimum wage when you ten and a half million Americans unemployed, wherein the teenage unemployment rate for black teenagers is 38 percent, to eliminate nearly, on the high side, 900,000 jobs in this environment seems to me to be inconsistent with the reality that we’re trying to create.

DESVARIEUX: The loss of jobs is the main talking point of the restaurant lobby fighting the bill. The Real News reached out to the largest restaurant lobbying firm, the National Restaurants Association, and received this statement from their representative.

SCOTT DEFIFE, EXEC. VP, POLICY AND GOVERNMENT AFFAIRS, NATIONAL RESTAURANTS ASSOCIATION (TEXT ON SCREEN): “During the economic recovery, restaurants have continued to provide opportunity to young Americans stepping into the workforce, displaced workers finding their footing, and a pathway to success for those that choose to stay within our industry.”

“An increase in the minimum wage like the one proposed in the Harkin/Miller bill would significantly limit the entry-level opportunities businesses can provide.”

ANDY SHALLAL, PRESIDENT AND CEO, BUSBOYS AND POETS: When we first opened Busboys and Poets, we thought, that’s really too low. We wanted to increase the minimum wage. So we became very outspoken about the issue of raising the minimum wage. So we raised it to $10.25 an hour. And, you know, of course, if you sit and do the math and, you know, look at every impact that will have, it’s quite a bit. It’s hundreds of thousands of dollars per location for us, having as many workers that we have and all of that.

DESVARIEUX: Andy Shallal is the president and CEO of the restaurant chain Busboys and Poets and the restaurant Eatonville. While running for the mayor of D.C., he currently has four locations and will be expanding with two more locations by the end of the year.

SHALLAL: We’re talking about minimum wage. We’re talking about the base that anybody can pay. And then, some states, like you said, can afford to pay more or feel like it’s better to pay more or feel that they want to take care of their workers differently, then that’s up to them to increase that. But I think we need to have some standard, just like we have labor standards when it comes to child labor, when it comes to overtime, when it comes to other issues that we fought over the years for. So I think we should always be progressing in this arena.

DESVARIEUX: Critics of the Harkin-Miller bill point to the law which is supposed to protect workers from actually collecting simply the $2.13 an hour wage. Employers are supposed to pay up to the federal minimum wage if servers don’t make enough in tips.

But although the labor law exists, Catherine says that in her six years waitressing, restaurants find a way to get around paying the minimum wage.

BRYANT: Some restaurants, I have had to tip out the hostess, the bartender, the barback, you know, the busser. And it gets very complicated. There’s no set system. Which means that your employer could say, oh, well, we had to take this out for–you know, they can make up reasons, to be honest. There’s really not a consistent system. So if you do approach your employer, they can always fudge the numbers. You know, there’s always, like, a way to ease your way out of it. It happens. It’s very common.

DESVARIEUX: So we’ve all been to a restaurant and the moment arrives when the check comes. A new survey has found that the majority of Americans are paying less than 20 percent on their bills. That means that tip workers at the end of the day are taking home less pay.

SARU JAYARAMAN, COFOUNDER AND CODIRECTOR, ROC UNITED: So the real question this year is not to legislators, will you raise the minimum wage; it’s will you leave the women out as you’ve done for the last two decades.

DESVARIEUX: For the last two decades, Congress has excluded tip workers from receiving any wage increases.

JAYARAMAN: Back in 1996, they were headed up by Herman Cain, who later ran for president or tried to run for president on the Republican ticket. And under his leadership, the–as we call it–the other NRA struck a deal with Congress saying that they wouldn’t oppose a modest increase in the overall minimum wage as long as the minimum wage for tipped workers stayed frozen forever at $2.13 an hour. So until Herman Cain, the tipped wage always rose when the minimum wage rose. And after ’96, it never rose again. And so that’s why in 43 states of the United States you have wages for tipped workers that range between $2 and $5 an hour.

Now, the other NRA likes to say, well, that’s okay, it’s okay that the wages are between $2 and $5 an hour, because these are waiters, they work at fancy restaurants, they take home $15 or $18 an hour with tips, when in fact 70 percent of tipped workers in America are women–their median wage, according to government data, is just about $8 an hour, including tips. They suffer from three times the poverty rate of the rest of the U.S. workforce.

DESVARIEUX: Those in favor of the minimum wage hike, like Massachusetts Democratic senator Elizabeth Warren, point out that workers relying on government programs are actually corporate subsidies by U.S. taxpayers.

Currently, the Harkin-Miller bill would peg any raise in tip workers’ minimum wage to inflation. But Senator Warren wants to take it a step forward by eliminating the sub-minimum wage all together.

There are states that currently have no sub-minimum wage, states like Nevada and California. All tip-workers make a minimum wage similar to the federal minimum wage.

JAYARAMAN: Look, this is the only industry in America, and, really, in the world, that gets away and has gotten away for the last many decades, saying, we shouldn’t have to pay our own workers’ wages; customers should. And so it’s a huge step forward for the Senate and the House to actually say, no, tipped workers need a raise, they need to go up as the minimum wage increases. And that is an important step forward, but because what we ultimately need is to get rid of the system altogether, so workers actually earn wages rather than tips.

DESVARIEUX: Catherine says that’s something that she certainly would like to see in the restaurant industry.

BRYANT: –if we raise the tip minimum wage to the level of minimum wage, if there was just a base salary that everyone should enjoy.

DESVARIEUX: Those in service will have to wait and see if Congress will serve their interest this time around.